Yesterday I read about a documentary film that debuted at the SXSW Film Festival in which the cinematographer was a cat. The item jogged my memory, as I had posted about this same cat back in 2007. He's not the only cat who takes pictures, so let's meet several cats who record their feline adventures in images and video.

German engineer Jürgen Perthold has a tomcat named Mr. Lee. As tomcats will do, Mr. Lee disappeared as soon as he was allowed outside and didn't come back until he wanted to. Perthold wondered what he did all day in his South Carolina neighborhood, and as you would expect from an engineer, he figured out a way to find out. He attached a camera to Mr. Lee's collar and set it to snap a photo every couple of minutes.

The results were a fascinating look at the world as a cat sees it: Mr. Lee looked at other cats, birds, and other wildlife, and kept an eye on things from underneath various cars. Perthold kept working on the camera device. He designed a harness that would break away under pressure, which puts the camera at risk, but makes the gadget safer for the cat. He added video capability and a GPS tracker. Perthold sells these devices and kits if you'd like to make your own version. He is working on a version that can send a live video feed. The gallery page for Mr. Lee's photographs also shows some of Perthold's customers sporting their CatCams -mostly cats, but also a dog and cow.

While Perthold focused on the engineering aspects of the CatCam, everyone else was fascinated with Mr. Lee's photographs, which were first posted in 2007. Filmmaker Seth Keal produced a 15-minute documentary on Mr. Lee and his photographic activities called CatCam. It premiered last Saturday at the SXSW Film Festival. 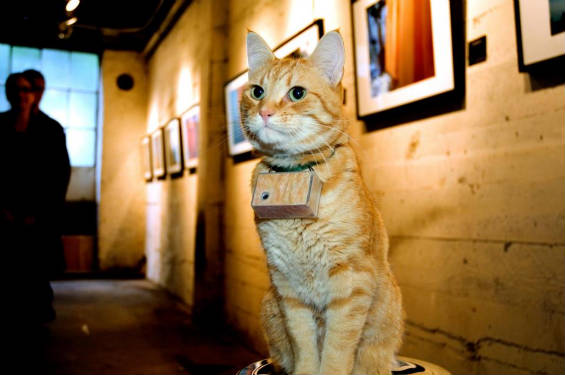 Michael and Deirdre Cross of Seattle were also curious about what their cat, Cooper, did all day, so they rigged him with a camera to capture what he observed. While Perthold the engineer focused on the technical aspects of the CatCam, the Crosses are filmmakers, so they were more impressed with the beauty of the photographs that Cooper came home with. It made them take a closer look at the meaning of photographic art.

"If my cat can take photos prettier than what we've taken, what is art? It asks a lot about the intention behind art and how it's interpreted," Michael Cross said.

Cooper wore the camera one day a week for a year. The project led to an appearance on Cats 101, a series on the Animal Planet network. Some of his best photographs were exhibited at the Urban Light Studios in Seattle in 2009.

Cooper's photographs are also in a book he authored along with Michael and Deirdre Cross called Cat Cam: The World of Cooper the Photographer Cat. Cooper branched out into cinematography with a collar-mounted video camera, which landed him a spot on the Animal Planet show Must Love Cats. You can follow the further adventures of Cooper on his blog and on Facebook. 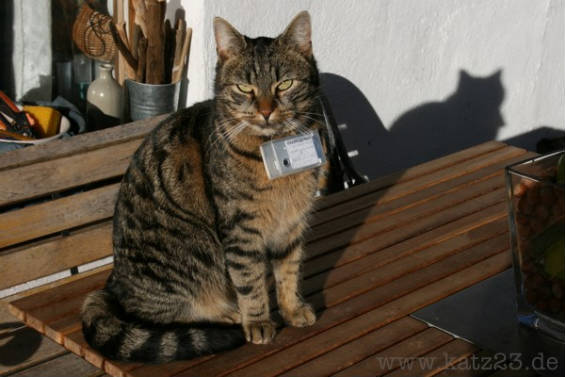 German artist Ramona Markstein purchased a CatCam from Jürgen Perthold in 2007 and attached it to her cat Fritz. After a few bugs were worked out, Fritz came home with a set of 200 pictures! Fritz only uses the CatCam twice a week. You can see photographs spanning several years in Fritz's gallery.

Fritz obviously has an eye for nature. Many of his best pictures are of interesting plants, but he also shoots humans and other cats.

Fran Hurcomb is an artist and photographer in Yellowknife, Northwest Territories, Canada. Her cat Leo wandered far from home on occasion and Hurcomb was a little concerned. She was looking for a GPS device to attach to Leo when she found Perthold's CatCam site. Leo was outfitted with the camera, and Hurcomb and her friends in Yellowknife eagerly awaited his return each day so they could see where he'd been.

Hurcomb said there were shots underneath cars, fences, and other hangouts of a cat. She would even hear about kids from the neighbourhood picking up Leo and smiling into the camera for long durations until both Leo's and their patience reached its max.

Hurcomb assembled some of the best pictures and exhibited them at the Down to Earth Gallery. You can see Leo's pictures at Flickr. 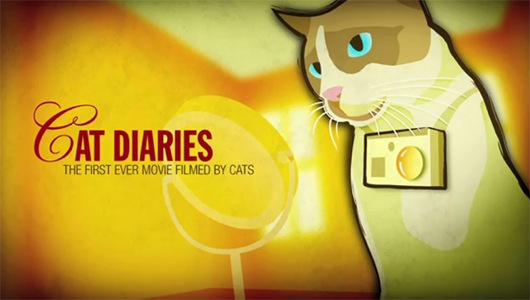 In 2009, animal behavior specialist Dr. Jill Villarreal attached cameras to 50 selected house cats for Friskies to document what an average cat does when it's out and about. That project was expanded in 2010 when another 25 cats were selected to carry video cameras. You can see the results of that project in the film Cat Dairies.