The Most Popular Jelly Bean Flavor in Each State

Buttered popcorn and black licorice are perhaps the most divisive jelly bean flavors ever created. But there’s a reason why the Jelly Belly factory keeps churning them out year after year: In 13 states across the U.S., people are sifting through their bags of candy beans specifically to get to the black or yellow-speckled beans, according to CandyStore.com’s interactive map of the most popular jelly beans by state.

Buttered popcorn is the top choice in the largest number of states, having been identified as the favorite flavor in California, Texas, Missouri, Arkansas, Georgia, Michigan, and Connecticut. “Our fans are vehement about buttered popcorn,” Rob Swaigen, vice president of marketing for the Jelly Belly Candy Company, said in 2014 on the occasion of the popcorn jelly bean's 25th anniversary. “They either love it and can’t live without it, or they don’t care for it and want it to go away.”

If this map is any indication, buttered popcorn isn’t going anywhere. Neither is black licorice—the third most-popular jelly bean in America, right after cinnamon. CandyStore.com’s map is based on 11 years of sales data, as well as the results of a survey taken by more than 12,000 candy lovers. The website also recently released a ranking of the 10 worst Easter candies and, lo and behold, generic jelly beans are the sixth most-hated confection among survey takers. “Those off-brand, dried out looking jelly beans are always either cracked or look like they’re ready to crack,” one survey respondent commented.

As it turns out, people are pretty particular about their favorite flavor and brand of jelly bean. So is your state rooting for cherry, juicy pear, or root beer? Find out in the map below. 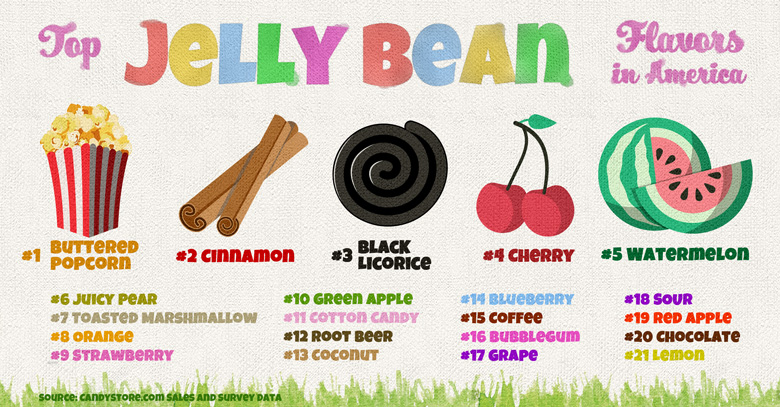