Halloween might be the unrivaled champion of candy-related holidays, but that doesn’t mean Christmas hasn’t carved out a large, chocolate Santa-shaped niche for itself in the sweets marketplace. And, of course, we can’t forget about candy canes, peppermint bark, and the red-and-green version of virtually every other kind of candy.

To find out which candies merrymakers are filling their bowls and stomachs with this holiday season, CandyStore.com analyzed survey responses from more than 32,000 consumers across the nation and compiled their top responses into one mouthwatering map.

As it turns out, 13 states—from California all the way to New Jersey—are reaching for mini Reese’s Peanut Butter Cups over any other holiday candy. Something about that shimmery tinfoil really does make you feel like you’re unwrapping a tiny, tasty gift. 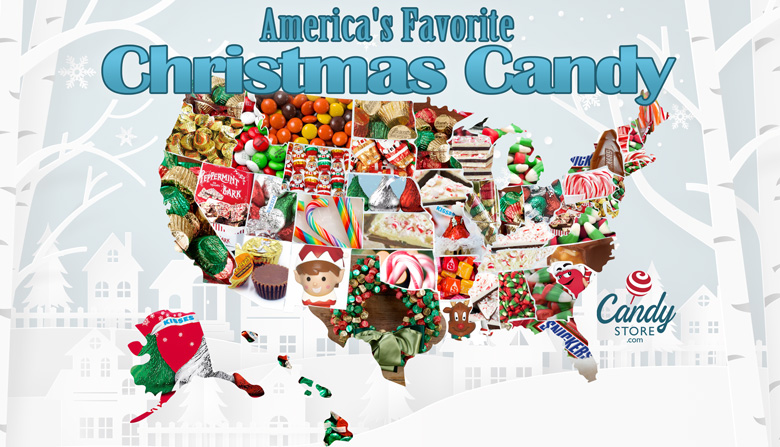 And, if you hoped everyone would kiss candy corn goodbye until next October, we have some bad news: “reindeer” corn, with red, white, and green stripes, is the top choice in a staggering eight states, all of which are in the eastern half of the country. Tied with reindeer corn was peppermint bark, which, given how much white chocolate it contains, is also a pretty polarizing choice.

Candy canes and Hershey’s Kisses clinched third place with a respectable six states apiece, but other Christmas classics didn’t perform nearly as well—chocolate Santas and M&M’s came out on top in only two states each.

After that, there were some rather unconventional competitors, including Starburst, Arkansas’s favorite holiday candy; and Pez, which somehow won the hearts of residents of both Louisiana and New Mexico.

And, unless you’re time-traveling from the 18th century, you’re probably not surprised that sugarplums didn’t make the map at all—find out what they actually are (hint: not plums!) here. You can also search the full list of state favorite candies below.