Clue: Brooklyn Nine-Nine Lets You Use Your Detective Skills During the Halloween Heist

Each season of the cop comedy show Brooklyn Nine-Nine hosts a Halloween heist episode where the detectives aim to steal that year’s trophy. Once they claim victory, they’ll be declared the most amazing human/detective/genius. Even though this may be the show’s last season, you can now participate in the shenanigans and use your sleuthing skills to determine who stole the prize.

In Clue: Brooklyn Nine-Nine, you’ll get to play as one of the show’s characters searching for hints as to which item is the ultimate trophy, who stole it, and where they hid it around the precinct. The six objects that could’ve been taken are previous year’s trophies, such as Captain Holt’s Medal of Valor, a cummerbund, and Holt’s watch. You’ll be able to use rumor cards and intrigue cards to help determine the culprit, so keep your scorepad close by to track notes and observations. 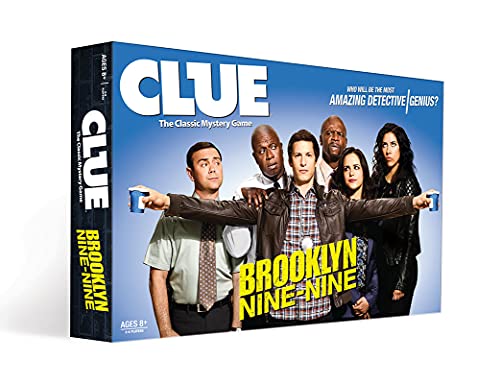 Buy it on Amazon

Put your skills to the test with a round of Clue: Brooklyn Nine-Nine, now available on Amazon, Entertainment Earth, and FUN.com. If you want to keep playing board games based on your favorite TV shows and movies, make sure to check out our list, which includes what we can only assume is a Jake Peralta favorite, Die Hard: The Nakatomi Heist.