For the 20th anniversary of the Harry Potter and the Sorcerer’s Stone movie adaptation, Funko is releasing a new batch of Pop! figurines based on some of the best moments from the film, and they're available for pre-order now.

The lineup includes beloved characters like Professor Dumbledore, Hagrid, and of course, Harry, Ron, and Hermione. Each Pop! features a character during a pivotal scene from the first movie, so Hagrid’s figurine shows him at the Leaky Cauldron holding a bowl of soup, as he tries to explain who Voldemort is and why Harry is so well-known throughout the wizarding world. Meanwhile, Ron’s Pop! shows him tangled up in the Devil’s Snare (a magical plant that has the power to constrict anything close to it), while Hermione’s toy depicts her with her wand outstretched as she casts a spell to help Ron escape the plant’s tough tendrils. Dumbledore’s figure comes with a miniature version of Hogwarts and is inspired by the scene where he awards Gryffindor the House Cup. 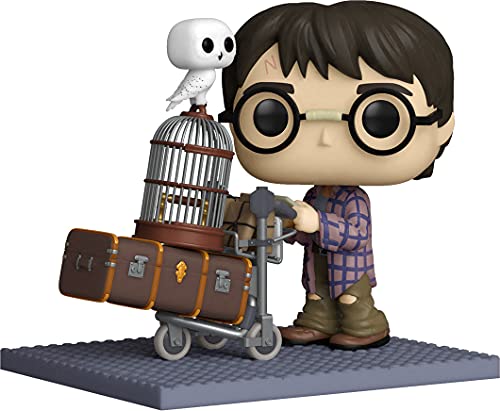 There are two versions of Harry available in this collection. The first shows him holding the scarlet Sorcerer’s stone, while the second depicts him as he's trying to find Platform 9 and 3/4 at King’s Cross Station in London. A third one of Harry attempting to catch one of his Hogwarts acceptance letters is also coming, but hasn’t been released yet. There's even a Ginny Weasley Pop!, but it’s from her scene in The Chamber of Secrets at Flourish and Blotts (a bookstore in Diagon Alley) where Lucius Malfoy places Tom Riddle’s diary in her cauldron of school supplies.

Each Pop! is now available for pre-order on Amazon; however, the Hagrid and Ginny ones are only available at Target. They should all be released by no later than Friday, December 3. If you’re looking for more ways to celebrate the upcoming anniversary, check out this new collector’s edition box set of the films in a Hogwarts Express replica.