Nearly 20 years ago, on December 19, 2001, the first film in director Peter Jackson’s The Lord of the Rings trilogy, The Fellowship of the Ring, premiered and would go on to generate more than $897 million worldwide at the box office. Though the original films and the subsequent Hobbit trilogy are based on J. R. R. Tolkien’s timeless novels, the movies have taken on a legend of their own. And now that this anniversary is almost here, it's a no-brainer that a new ultimate collector’s-edition box set would come out that includes both trilogies and hours of bonus material in one (nearly five-pound!) package.

Inside the set, you'll find all six films—theatrical and extended editions—remastered on 4K discs, on Blu-ray, and as digital downloads. There is even an exclusive Blu-ray bonus disc that features the first movie's original 26-minute Cannes Film Festival presentation reel from 2001 and three special reunions of the first trilogy's cast at the Alamo Drafthouse, hosted by Tolkien superfan Stephen Colbert. In total, the whole set includes 31 discs, along with commentary tracks on the Blu-rays. 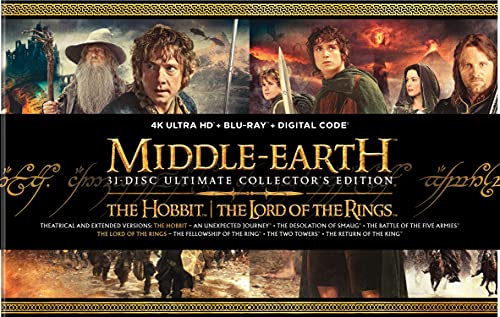 If you want more tangible bonuses, there's a 64-page behind-the-scenes booklet that showcases costume designs, photographs from the set, and production notes. And you'll also get seven two-sided travel postcards featuring artwork based on the locations in Middle-earth.

This massive set is now available for pre-order on Amazon for $240 and will be released on October 26. If you also happen to be a Potterhead, make sure to check out the 4K and Blu-ray Harry Potter franchise box set that comes inside a replica Hogwarts train.