This Presidential Pets Mugs Is the ‘Ultimutt’ Gift for History Lovers

Over the centuries, U.S. presidents have had some memorable pets. For instance, Calvin Coolidge had a pygmy hippopotamus named Billy, and Theodore Roosevelt kept a menagerie of eclectic animals, including a small bear named Jonathan Edwards, which was sent to him by supporters in West Virginia.

The Unemployed Philosopher's Guild pays homage to some of the most unforgettable presidential pets of all time with this mug, which is available for $16 at Uncommon Goods and on Amazon for about $17. This 12-ounce mug features 30 of the most loyal companions to our nation’s leaders—including Bo Obama, the Obama family's Portuguese water dog—and could be a great gift for history and animal lovers alike heading into the holiday season. 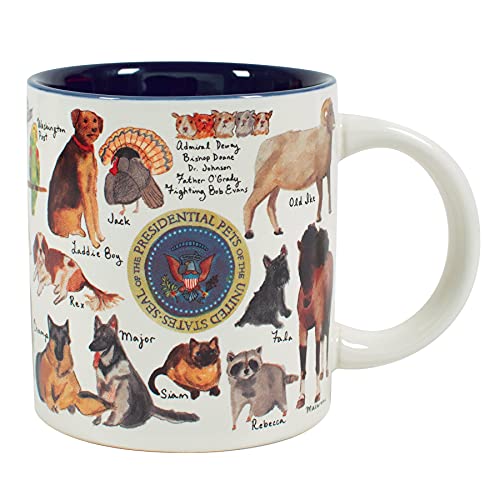 Get The Unemployed Philosopher's Guild’s Presidential Pets Mug on Amazon

The mug showcases some of the more unusual presidential pets, too. William Howard Taft’s Holstein cow Pauline Wayne (who made headlines when she went missing for two days in 1911) is featured on the cup alongside Jack, the turkey famously pardoned by Abraham Lincoln in 1863 after his son, Tad, grew attached to the bird. Mr. Reciprocity and Mr. Protection, Benjamin Harrison’s opossums, also appear on it.

You can get your presidential pets mug at Uncommon Goods for $16 or on Amazon for $17.