Can a Computer Make a Meme?

How is language evolving on the internet? In this series on internet linguistics, Gretchen McCulloch breaks down the latest innovations in online communication.

There's something so delightfully human about memes. A few decades ago, no one would have predicted bizarre phenomena like LOLcat or doge. The best memes are satisfying in the way that a good joke is satisfying. Surely that's not something you can code into a computer, though a recent study by computational linguists William Yang Wang and Miaomiao Wen of Carnegie Mellon University tried to do just that.

There were already researchers working on programing auto-generating descriptions of images, but that's not quite the same as generating meme-like image macros. First of all, not all images are suitable meme backgrounds. And even when they are, it's not enough to just describe the actual image itself—"white cat wearing bowtie sits at table" is not a meme-ish caption. Wang and Wen recognized that the key was that memes occur in genres or patterns to be followed.

Given a certain image, such as Scumbag Steve, Socially Awkward Penguin, or the Forever Alone face, the computer had to figure out which of thousands of possible captions would fit best. The first thing that the system would do was run the image through Google's reverse image search, which automatically assigns an image a few keywords based on similar images in its index. Those keywords were then used to search a list of 269,473 meme captions taken from memegenerator.net and cheezburger.com. Possible captions were ranked by comparing various features of the original image and the text, and the top-ranked caption was assigned to the image. So there is nothing new here—the computer just has to tie existing joke-text to an existing meme image.

When all these steps are taken together, how did the computer do? Here's a table that Wang and Wen came up with: 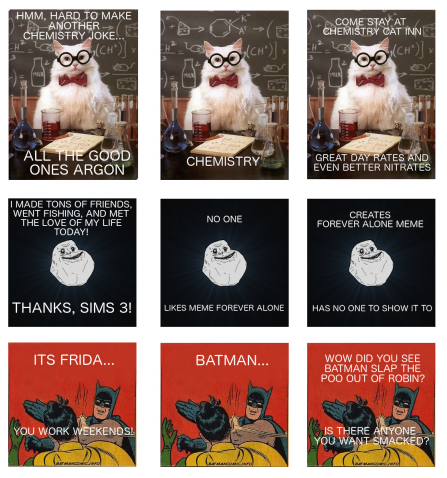 The left column shows the top-ranked human-created and human-voted memes for Chemistry Cat, Forever Alone, and Batman Slaps Robin. The middle column features the best automatically-generated memes using a less sophisticated method, and the right column has the best automatically-generated memes using Wang and Wen's method. We can see that Wang and Wen's computer manages to get a pretty good pun for Chemistry Cat and a decent Forever Alone reference, but fails at Batman Slaps Robin (Wang and Wen explain that it's actually a caption from the Overly Attached Girlfriend meme that just happens to mention "Batman" and "Robin"). But hey! That's still pretty impressive.

So, can a computer write a meme or are they uniquely human? So far, all we've really got is a machine that'll tell our own memes back to us.