Scrotum Frogs Near Lake Titicaca Die Off in Alarming Numbers 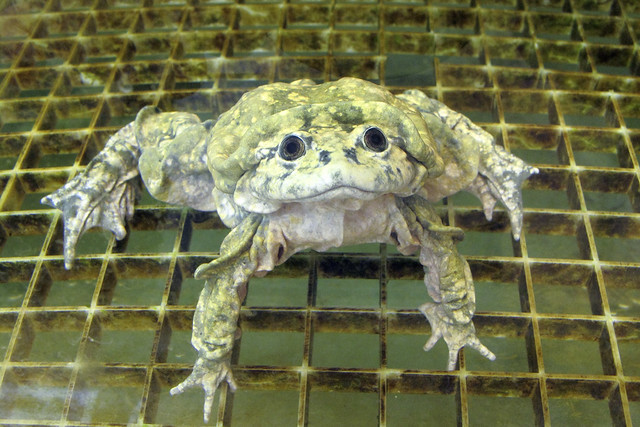 An odd-looking frog with a funny name is currently facing a very serious threat. As National Geographic reports, Titicaca water frogs (Telmatobius coleus), also known as scrotum frogs, are turning up dead by the thousands in South America, and scientists are still unsure why.

The species, which can be found around Lake Titicaca on the border of Peru and Bolivia, was in a dire situation to begin with. Populations have plummeted by 80 percent in recent years, and this latest mass death has placed added stress on the critically endangered amphibian.

Roughly 10,000 of the frogs were found dead along a 30-mile stretch of the Coata River branching out from Lake Titicaca. Water tests and necropsies will hopefully shed more light on the cause, but scientists are already pointing fingers at pollution. Human sewage and heavy metal runoff from mining are both possible factors at play.

The scrotum frog is aptly named for its wrinkly, baggy skin. In addition to creating a distinct look, the extra skin folds allow the frogs to absorb more oxygen underwater in the high altitudes of the Andes. The name has also led to an unfortunate (and false) association with virility: Those seeking health benefits will sometimes harvest frogs from the lake and turn them into medicinal broths known locally as "frog juice" or jugo de rana.

Scientists say it’s possible that these human-made stresses are compounding threats from nature. Chytrid, a disease responsible for the deaths of millions of amphibians around the globe, is another potential menace experts are considering.

Know of something you think we should cover? Email us at tips@mentalfloss.com.