The future is arriving at the speed of ...time. Back in the 1970s, Lee Majors received bionic implants that made him The Six Million Dollar Man. But that was fiction. In the 1980s, we were introduced to a cyborg with living flesh grown over it called The Terminator. That was also fiction. All that time, roboticists and medical researchers were working on real machines to take over the functions of human organs, such as respirators, mechanical hearts, and dialysis machines that we are familiar with. But what about other body parts? Here are some that can change someone's life, or maybe just give us a laugh.

In the world of videoconferencing, it's difficult to get close to people. Businessmen often size each other up by shaking hands, a custom that goes back to antiquity. Roboticists from Osaka University have a way to fill in that gap in global meetings. The Robot Hand is made of silicon and sponge, can be heated to body temperature, and is embedded with pressure sensors. The hand that controls it remotely transmits the grip and amount of pressure to the person he's shaking hands with.

Long distance romances suffer the same lack of tactile sensation. Up to the plate steps Kissenger, a robotic device that connects with a faraway lover via Skype. That is, if your lover has another Kissenger. The sensors in the odd-looking device transmit your lip movements to your partner. And vice-versa. The company that makes Kissenger, Lovotics, also makes a couple of other devices to transmit your passion.

At first glance, and you may blush, the robot butt seems like some kind of art project. But it appears to be an exercise in robotic research. A human-shaped pair of buttocks named Shiriresponds to different kinds of touch with one of three reactions: tension, twitch, and protrusion. Sensors trigger the reaction of airbags implanted in the posterior. 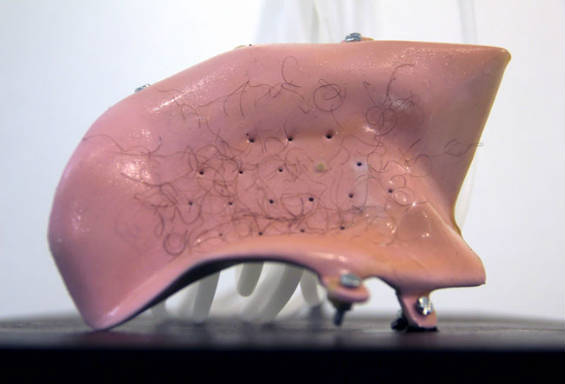 How many times have you said to yourself, "Gee, I wish I had an artificial armpit that sweats"? This prototype armpit produces industrial Japanese sweat, sort of like the real thing. This was built by Kevin Gren­nan, as part of the art project called The Smell of Control: Fear, Focus, Trust. 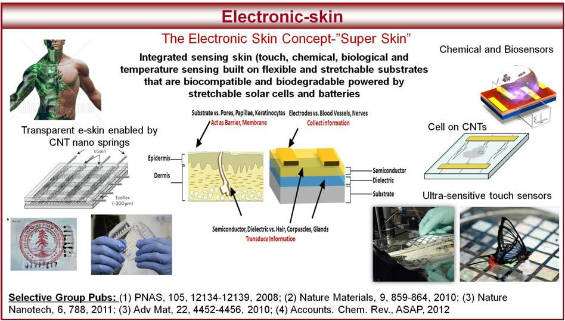 Stanford researcher Zhenan Bao has been working on electronic skin. The flexible, stretchable, and resilient skin is embedded with tiny sensors that can detect the sensation of touch. Embedded transistors notice changes in the sensors and send signals about it. And it's solar-powered! There's no word on whether the skin will ever be implanted in humans, but the applications for using it on robots or in uniforms is exciting. The sensors in the electronic skin could someday be programmed to detect biohazards, weapons, or nuclear fallout. 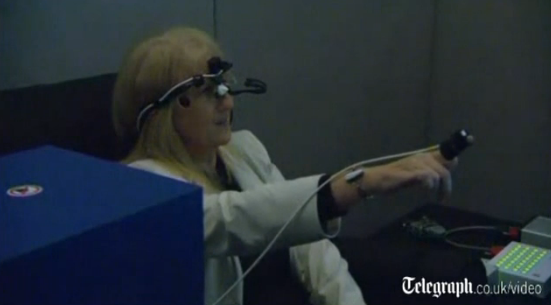 Dianne Ashworth suffered severe vision loss due to retinitis pigmentosa. The Australian was fitted with a bionic eye in July. The device, developed by Bionic Vision Australia, is a set of glasses with a camera attached. A wire from the camera is implanted in the user's retina, so the light signals are sent directly to the retina, and then via optic nerve to the brain. The bionic eye requires the patient to have some functioning retinal tissue. See a videoof the device.

For those who have no retinal function, the Argus II bionic eye implant is beginning to be used in Europe. The device includes camera goggles and a wireless receiver that is implanted behind the eye. The receiver consists of 60 electrodes, which lights up like a 60-pixel display and sends those signals to the optic nerve. It may be lo-res, but it's an artificial retina! 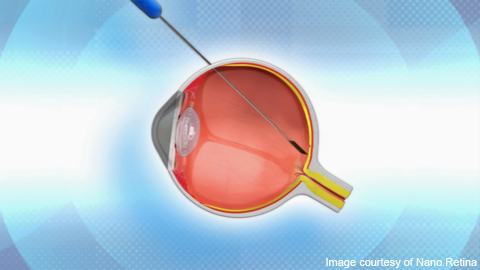 The Bio-Retina by the Israeli company Nano Retinagoes a step further by generating 576-pixel grayscale image onto the receiver connected to the optic nerve. Another advantage will be that wireless signal transmission is replaced by laser lights that shine from glasses into the iris and onto the receiver. The Bio-Retina is not yet available, and is scheduled to go into clinical trials in 2013.

The rubber robotic mouth was developed by Professor Hideyuki Sawada at Kagawa University in Japan to help hearing-impaired people with their speech. It was creepy enough when we first saw (and heard) it in 2010, but later we heard it sing!In this video, the mouth sings the Japanese children’s tune “Kagome Kagome.” The lips start to move about 30 seconds in. 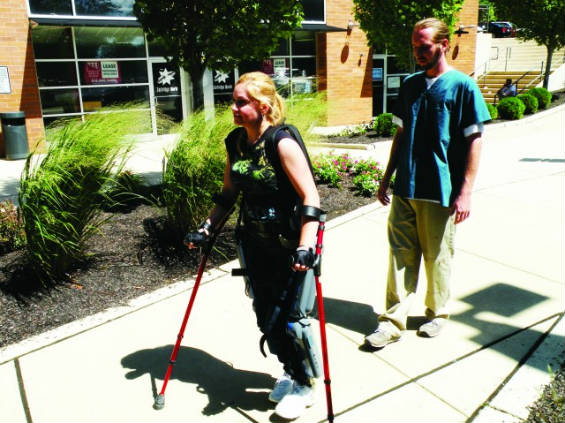 Claire Lomas completed the London Marathon this past May with the aid of a bionic suit, even though she is paralyzed from the chest down. The 32-year-old Lomas broke her neck and back in a horse riding accident in 2007, but she can walk with the aid of an exoskeleton. The $69,000 walking apparatus, called the ReWalk bionic walking device, responds to changes in balance, and takes a step when the wearer indicates the desire for one. After the marathon, Lomas took the exoskeleton home for everyday use. ReWalk assists with walking, standing, sitting, and even climbing inclines and stairs, thanks to an on-board computer. Photograph from Argo Medical Technologies.