Legendary monsters live wherever there are people to tell the tales to -including North America, where there are many more than will fit into one post. This is part two of a list that began last week. And there are plenty more scary tales to tell!

Ogopogo lives in Lake Okanagan in British Columbia. Several of Canada's deep lakes have monsters, but Ogopogo is the best known. Native legends of N'ha-a-itk, meaning the lake monster, go way back. First Nations accounts pinpoint the home of the monster at a cave under Squally Point near Rattlesnake Island. A sighting by Mrs. John Allison in 1872 brought the legend into the modern era, and many people have reported sightings of "something" in the water since then. Ogopogo is described as 20-50 feet long, with a horse-shaped head and a serpentine body. Mysterious photographs have been taken of unidentified lake creatures. Whatever is down there, it is a protected species. Illustration by Crypto-Researcher at en.wikipedia. 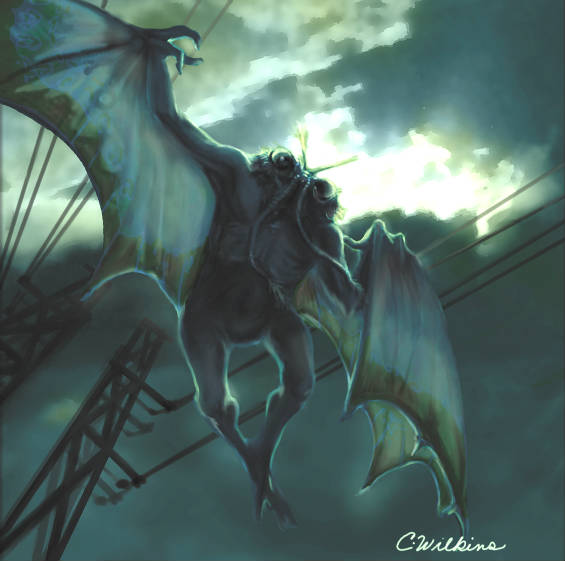 Mothman is the name given to a creature first seen in West Virginia in November of 1966. Several sightings were reported, in Clendenin, Point Pleasant, and Salem, of a flying creature that was six or seven feet tall and had eyes that glowed red in the dark. The press called the creature Mothman after a character on the Batman TV show. Within a year, over 100 sightings were reported in the area, and even more reports of just the red lights. Witnesses said the creature glided like a bat, but could elevate itself effortlessly. It could not talk, but screamed like an eagle. After 1967, the sightings grew less frequent and gradually died off. There are many possible explanations for the sightings, but nothing has been confirmed. Point Pleasant, West Virginia has a Mothman Festival every year. Illustration by Cathy Wilkins. 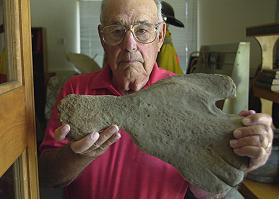 The Proctor Valley Monster seems like a tale told around a campfire, just right for a Hollywood B-movie. A teenage couple go parking in the woods off Proctor Valley Road, in the southeast corner of San Diego County in California. The car won't restart, or maybe they had a flat tire, and the boy gets out to investigate -but he doesn't come back. The girl stays inside, terrified because she hears scratching on the outside of the car. Police find her the next day, still hiding in the car. The boyfriend? He's dead, torn and bloody, dangling from a tree, while his hands brush the car, producing scratching noises. The story sometimes has mysterious huge footprints found nearby. The legend of the Proctor Valley Monster grew, and it is described as a 7-foot hairy humanoid a la Bigfoot, or sometimes a cow-like animal with its body parts in the wrong place. The Proctor Valley Monster is assumed to be responsible for livestock mutilation that occurs every now and then. The Bonita Museum in Chula Vista has a casting of a strange footprint alleged to be that of the monster. Photograph by Uma Sanghvi/Unon-Tribune.

Momo is short for Missouri Monster. The giant ape-like creature was reportedly seen in the area around Louisiana, Missouri since the 1940s, but sightings in the 1970s brought serious attention.

On the afternoon of July 11, 1972, 8-year-old Terry Harrison and his 5-year-old brother, Wally, were playing in their backyard at the foot of Marzolf Hill on the outskirts of Louisiana. Their older sister, Doris, was inside the house. Doris heard her brothers scream. She looked out the bathroom window and saw a black, hairy manlike creature, standing by a tree.

The thing appeared to be six or seven feet tall. Its head sat directly atop its shoulders, with no visible neck. The face was likewise invisible, completely covered by a mass of hair.

And the creature had a dead dog in its arms. Several local residents had also seen the creature, and footprints were found, which led to a search of the woods by a couple of dozen hunters. Most assumed the creature was a bear, but no bear was found. However, the searchers found dog bones, a bed of leaves that may have been used as a nest (which smelled horrible), and more footprints. Other sightings were reported, further and further away from the Missouri town of Louisiana. Along the way, the creature was associated with the Bigfoot legend. However, Momo is described as having a peculiarly big head, no neck, and a horrible smell that sickens people who encounter it. A low-budget film about Momo is in production (and has been for several years). 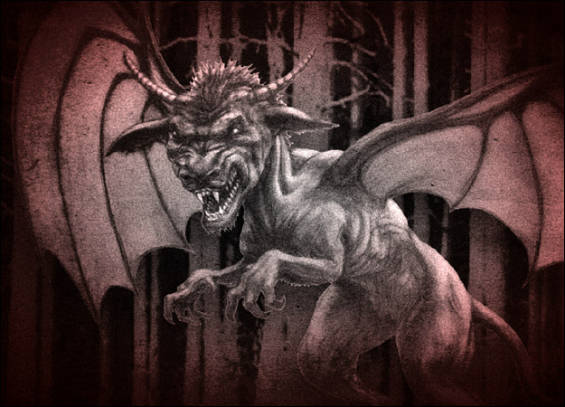 The Jersey Devil (also called the Leeds Devil) has a history going back 300 years in the Pine Barrens area of New Jersey. The legend says that in 1735, Mrs. Leeds cursed her 13th pregnancy, consigning her unwanted child to the devil. Then she forgot her actions, and gave birth to a boy who immediately after birth changed into a roaring demon! He grew quickly, sprouted wing, horns, and claws, and attacked and killed his mother and other family members. The demon escaped up the chimney and to the forest, where it was seen sporadically over the next couple of hundred years. Mostly, the reports told of horrible screams heard in the dark. When strange footprints were spotted in 1909, a panic ensued and schools were even closed due to low attendance. Many sightings were reported over the next week, including a woman who beat the creature with a broomstick as it attacked her dog. The Jersey Devil flies or runs away from these encounters. Sightings continue to this day, from people who find themselves in the spooky, mist-filled Pine Barrens at night. The creature is described as kangaroo-shaped, about four feet tall, with horns or antlers, claws on its forearms and hoofs on its back legs, and huge bat wings. Stories are told in Texas and Mexico of La Lechuza, which means "owl," but in this case refers to the "Witch Bird." She was once a woman, albeit one who practiced black magic. After her witchcraft was discovered, she was killed by angry neighbors. But she came back in the form of an human-size owl -with a woman's face! Her usual screams in the dark woods terrify people, but when she wants to lure someone to their doom, she will coo and cry like a baby. Then she'll carry the victim off in her claws to her nest, where she will eat them at her leisure. In other versions of the story, La Lechuza is a woman during the day, but by witchcraft turns into an owl at night. Photograph by Flickr user Stuart Richards. 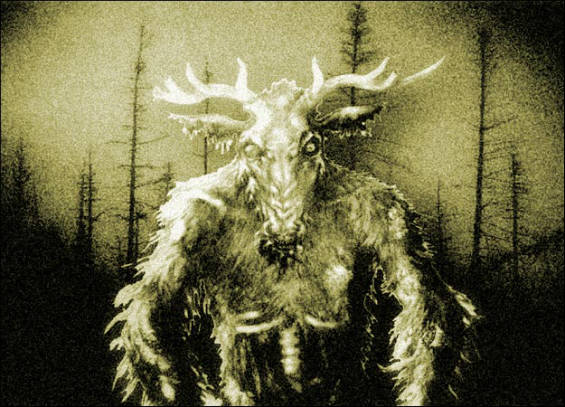 Alternately spelled Windigo, as well as other variants, this monster comes to us from Algonquin folklore of Canada and the northern part of the U.S. The Wendigo is a large furry beast that eats people, but it has a more supernatural story than, say, Sasquatch. Described as a bipedal creature with big eyes and a very skinny body, it is said to be forever hungry. The spirit of the Wendigo can possess people and induce them to cannibalism. Some tales say that the creatures were once humans that became possessed and turned into the monsters. And if a human were to ever practice cannibalism, the act itself invites possession by a Wendigo. Wendigo psychosis was a term used to explain some rare cases of cannibalism long ago among the Algonquin people, possibly stemming from the belief that one is possessed by a Wendigo. 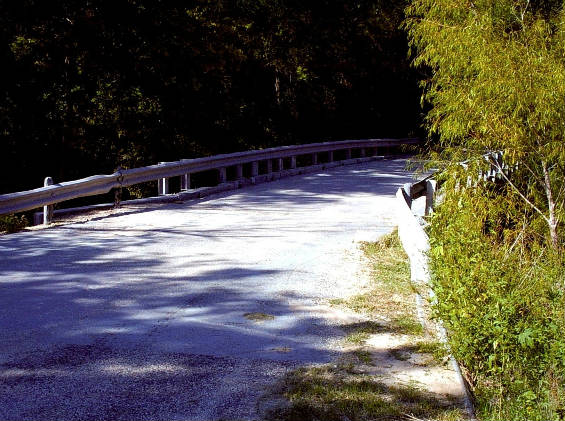 The Donkey Lady is a legend in San Antonio, Texas. As the story goes, in the 1950s a woman was badly burned in a house fire. Her features were horribly disfigured and her fingers and toes burned off, leaving her hands and feet looking like hooves. Two of her children were killed in the fire, which drove the woman insane. She was banished from the town for her crazy rantings and went to live under a bridge, where she occasionally attacks and terrorizes passers-by. The old stone bridge where she lives (or haunts) is off Applewhite Road in south San Antonio. The legend of the Wampus Cat is still told in the mountains of East Tennessee and western North Carolina. A long time ago, it is said, a Cherokee woman spied on her husband and the men of the tribe as they were away on a hunting trip and told sacred tales around the campfire that women weren't supposed to hear. She hid by wearing the skin of a wildcat, but was found by the tribesmen. The tribe's medicine man cursed her to always wear the skin of the cat, essentially turning her into a cat monster. She was doomed to roam the mountains, wailing for her lost humanity. Those who wander the mountains at night are very likely to hear those screams. A few sightings of the Wampus Cat claim the animal resembles a cougar but walks upright, with red glowing eyes and fangs that put other cougars to shame. Photograph by Flickr user Natalie Manuel. 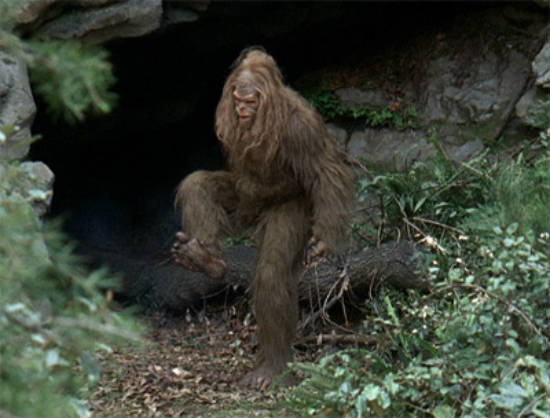 Undoubtedly the most familiar North American cryptid is Sasquatch, also known as Bigfoot. The Sasquatch Information Society keeps track of reported sightings, which come in constantly from all over Canada and the United States, but center mainly in the Pacific Northwest. Bigfoot is described as having the face of a gorilla, but the posture of a human. It is seven to nine feet tall and covered with long hair. Like some other cryptid apes, Sasquatch has an awful odor. Native Americans have legends of local apelike creatures going back many generations. The name Bigfoot was coined after huge footprints were found in 1958. Although many claims of evidence have been exposed as hoaxes, many people believe that it’s possible for a species of giant ape or hominid to reside in the wilderness areas.

There will be more monsters in this series, as I have a list of requested monsters to add. If there is one not yet covered you'd like to see, please let me know in the comments.