14 of Your Dog's Wild Relatives

All the domestic breeds of dogs that we are familiar with, from chihuahuas to pit bulls, are the same species: Canis lupus familiaris. In fact, our dogs are a subspecies of Canis lupus, or wolf. Your dog could interbreed with most wolves -if you weren't a responsible pet owner who spayed or neutered your dog. Photograph by Flickr user Fatemeh.

Dogs belong to the taxonomic family Canidae (canines) which is divided into two tribes: those related to wolves (Canini) and those related to foxes (Vulpini). A couple of canine species lay outside these two tribes, but hyenas are not canines. They look like and act like dogs, but as we learned in a post last week, hyenas are more closely related to cats than to dogs! Let's look at some wild dogs that are related to your pet.

The species Canis lupus covers a lot of dogs. There are 39 subspecies, one of them being all domestic dog breeds. Thirty-seven of these subspecies are wolves, the largest and most common being the Eurasian gray wolf (Canis lupus lupus), the common ancestor of domestic dog breeds. The gray wolf is found throughout the Northern Hemisphere and comes in black, brown, grey, and white, or a combination of these colors. It is not considered to be a threatened species, but is protected in some areas. Photograph by Flickr user BBM Explorer. 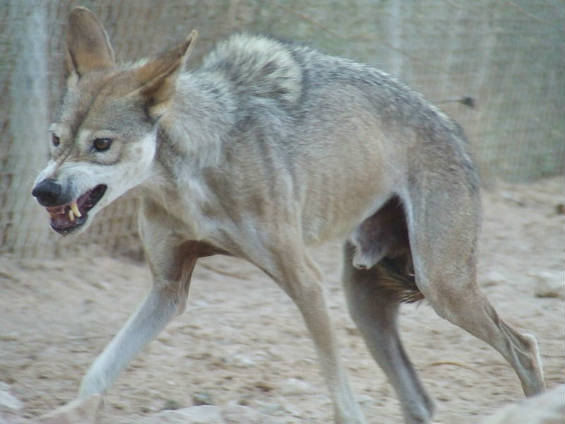 Quite a few wolf subspecies look like the common gray wolf, but a few are strikingly different. The Arabian wolf (Canis lupus arabs) evolved to live in the deserts of the Middle East, which is why its hair is so short. The fur varies over time according to the season and local temperatures. Photograph by Wikipedia user ???? ?????. The Arctic wolf (Canis lupus arctos) is pretty much just a wolf that lives in the Arctic. The subspecies has adapted to its habitat by growing thick white fur that grows longer between the toes to protect its footpads and shorter ears and snout to conserve heat. Photograph by Flickr user dankos-unlmtd. Coyotes (Canis latrans) are a species that has evolved as a canine predator but subsists alongside civilization better than most wolves. With less fear of humans, they've learned to help themselves to livestock, or will scavenge for garbage if no easy prey is available. However, we know at least one who is obsessed with a certain desert bird. Photograph by Flickr user Jean-Guy Dallaire. There are three Canis species classified as jackals, or Old World coyotes. Shown here is a black-backed jackal (Canis mesomelas) which is native to several areas of Africa. The side-striped jackal (Canis adustus) and the golden jackal (Canis aureus) are the other two species. Jackals are predators, but are also scavengers like the coyote, and while they prefer fresh meat, will eat anything available. Photograph by Wikipedia user Raoulduke47. The subspecies of Canis lupus that is neither domestic nor a wolf is Canis lupus dingo. However, there is some argument that dingos are indistinguishable from domestic dogs except for the fact that they are not domestic. The subspecies covers the Australian dingo plus some feral dogs of Asia such as the New Guinea Singing Dog. The Australian dingo is descended from domestic dogs that were brought to the island thousands of years ago which became feral over many generations. The dingos of Australia still interbreed with more recent domestic dogs, and so the subspecies is considered "vulnerable." Photograph by Flickr user Michael Dawes. The dhole (Cuon alpinus) of Asia is a dog of the Caninae family and Canini tribe, but has its own genus. You would recognize this creature as a dog, but it has more teats and fewer teeth than Canis, and whistles more than it barks or howls. They live in the forests and steppes of Russia, the Himalayas, and even as far south as Java. The biggest number of these endangered dogs live in India. Photograph by Flickr user Amit Kotwal. The other tribe of dog is the fox, or Vulpes. When we think of foxes, the image that comes up is usually the common red fox (Vulpes vulpes) which lives all over the Northern Hemisphere, plus Australia. It is the largest of the true foxes. Despite its name, it comes in varying colors, and there are 45 recognized subspecies. Photograph by Flickr user Brad Smith. 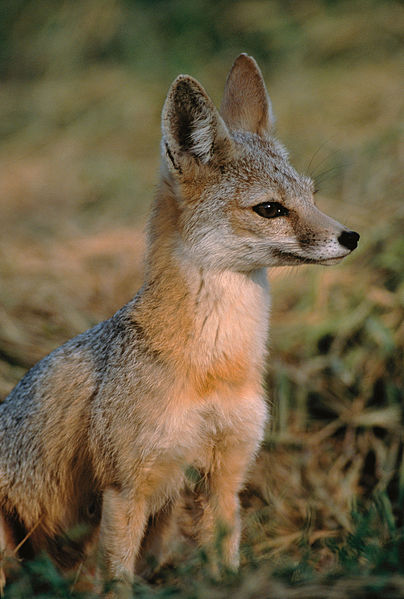 The kit fox (Vulpes macrotis) is native to the deserts of the western United States and Mexico. Its skinny body and large ears are adaptive to desert life, like the coyotes it somewhat resembles. There are eight subspecies of kit fox, mostly named after their habitats, like the San Joaquin Kit Fox (Vulpes macrotis mutica). The Arctic fox (Vulpes lagopus) is sometimes classified as Alopex lagopus, which is an older classification that taxonomists still quarrel about. The lagopus sounds like a relation to rabbits, but in this case it refers to the fur that grows between the fox's toes to help protect them from cold surfaces. The Arctic fox could be mistaken for other fox species when seen in summer. Photograph by Flickr user Billy Lindblom. But this fox is very sensitive to seasonal changes, and will grow the thick warm white coat that made it famous by winter. Photograph by Flickr user Denis-Carl Robidoux. The fennec fox (Vulpes zerda) takes the desert adaptation of large ears used to dissipate heat to the max. The small nocturnal fox lives in the upper Sahara where heat dissipation is of the utmost importance. At just a couple of pounds and 9 to 16 inches long, the fennec fox is the world's smallest canid species (toy dog breeds are not representative of the species). Fennec foxes are sometimes kept as pets. Photograph by Flickr user Joachim S. Müller. Urocyon is a genus of foxes that climb trees. The island fox (Urocyon littoralis), also called the Channel Island fox, is barely bigger than a fennec fox. The only other existing Urocyon species is the slightly bigger gray fox (Urocyon cinereoargenteus). Photograph by Flickr user Robert Thompson. The raccoon dog (Nyctereutes procyonoides) is of the Canidae family, but is neither a wolf nor a fox. It is not at all related to a raccoon, but may be mistaken for one. A distant cousin of your dog, the raccoon dog is still a closer relation than a hyena. Raccoon dogs are native to eastern Asia and are farmed for their fur. Photograph by Flickr user Dennis Irrgang. 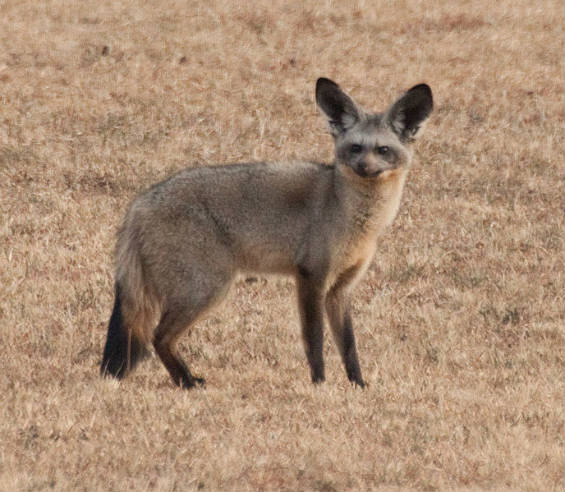 The bat-eared fox (Otocyon megalotis) is another member of the Canidae family that is neither a wolf nor fox (despite the name). It is the only species of the genus Otocyon, and lives in the African savannah, eating insects -mostly termites. Its name comes from its distinctive big black ears. Photograph by Wikipedia user Samsara.