Don’t let their unassuming exterior fool you. Wombats have plenty of quirks that help them fit right into Australia’s unusual animal kingdom. Here are 12 facts worth knowing about these rotund marsupials from Down Under.

Unlike most marsupials, the pouch a wombat uses to carry her young opens towards her rear rather than her face. This distinction allows mother wombats to dig without scooping dirt into her baby’s home. Because wombat bodies are fairly low to the ground, this backward-facing pouch orientation also provides extra protection to the baby, or joey, while the wombat is walking.

2. THEIR MAIN LINE OF DEFENSE IS A TOUGHENED POSTERIOR.

When running away from predators like Tasmanian devils and dingos, wombats rely on their super-powered rumps to protect them. Their rear-ends are mostly cartilage, which makes them more resistant to bites and scratches. At the end of a chase, wombats will dive into their burrows and block the entrance with their butts. They’re also capable of using their powerful backs to crush the skulls of intruders against the roofs of their burrows.

3. THERE ARE THREE SPECIES.

4. THEY APPEAR IN AN ANCIENT ART WORK.

Depictions of wombats are rarely seen in ancient aboriginal rock art, but one of the exceptions can be found in Australia’s Wollemi National Park. The wombat drawing on the wall of a rock shelter in the area is believed to date back 4000 years.

The largest marsupial to roam the earth was a relative of the modern wombat. The diprotodon lived in Australia 2.5 million years ago, and was estimated to weigh around 3 tons and stretch 14 feet from nose to tail. The “mega-wombat” vanished around the same time that tribes of people began appearing on the continent, which has sparked debate surrounding our role in their demise.

Alternative names for a gathering of these pudgy critters include a “mob” or “colony.”

7. THEY’RE FAST WHEN THEY NEED TO BE.

With their stubby legs and stocky bodies, wombats aren’t the most agile-looking creatures on earth. They walk with an awkward little waddle, but when a threatened wombat breaks out into a sprint, they can sustain speeds of 25 miles per hour for 90 seconds at a time. To put that into perspective, Olympic runner Usain Bolt’s top speed was recorded at a little less than 28 miles per hour.

Wombats enjoy a vegetarian diet of roots, scrubs, grass, and bark. In order to process all that roughage, they have special enzymes in their stomachs that help them break down the tough grub; it takes about two weeks to fully digest a meal. They also have teeth that grow continuously to make up for the constant wear. 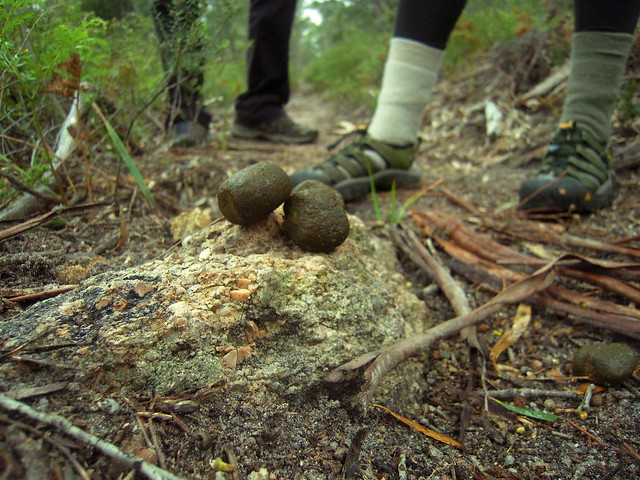 Wombats have some of the most distinct droppings on earth. They produce 80 to 100 of them a night, and each comes out in a neat, cube-shaped package. Using feces to marking their territory helps wombats to navigate at night via their sense of smell. Instead of pooping in the dirt, wombats prefer to do their business atop surface like rocks or logs where it can be seen. The turd’s unique shape is what keeps it from rolling off and onto the ground.

Wombats build extensive burrows for themselves, with their underground tunnels sometimes stretching 650 feet in length. Their strong, sturdy feet and long claws help them to clear up to 3 feet of dirt a night.

11. A WOMBAT WAS AN UNOFFICIAL OLYMPIC MASCOT.

When the Olympics came to Sydney in the summer of 2000, a cartoon kookaburra, platypus, and echidna were chosen as the event’s official mascots. There was also “Fatso the Fat-Arsed Wombat,” a stuffed animal parody mascot created by a Sydney cartoonist for a comedic sports program covering the games. The character was originally created as a criticism of the commercialization of Olympic mascots, but he became so popular with fans that he eventually overshadowed the real thing. At one point, the Australian Olympic Committee tried banning athletes from appearing with the wombat, but their attempts were unsuccessful. A statue of Fatso was erected outside of Sydney’s Stadium Australia following the games, but his popularity turned out to be his downfall—the statue was stolen a few months later.

Even though wombats sometimes live together in interconnected burrows, they’re generally shy creatures. Male northern hairy nosed wombats live alone, while females can get along well enough to share an underground home.

Sharing a burrow is one thing, but most wombats will still try to avoid their peers when they're on the surface.