Yarnbombers make the world cozy and colorful, one tree, bench, or tank at a time.

Launched in December 2013, The Remembering Tree is an annual yarnbombing project in Stratford-upon-Avon, UK, that raises funds for GAGA (Goodwill and Growth for Africa). Crocheted squares—half are made in the UK and half by impoverished women in South Africa "to help boost their income and gain new skills," according to GAGA's website—are sold as memorials to lost loved ones, then used to cover a tree overnight. A list of the names accompanies the display. The location of the tree is kept a secret; according to the town's website, "Although Stratford District Council are fully behind the ‘The Remembering Tree,’ and are aware of its location, we want to keep it a secret so that you can get a great sense of pleasure from the surprise." After six weeks, the squares are removed from the tree, washed, and sewn into blankets for those who need them in both Africa and the UK. You can find out more about The Remembering Tree on the project's Facebook page.

At the annual Victorious Festival in Southsea, Portsmouth, UK, in 2014, more than 200 people donated crocheted squares to cover an entire World War II-era tank in yarn. The project's goal was to bring awareness of breast and testicular cancer to festival-goers. After the festival, the covering was divided into blanket-size pieces and donated to homeless shelters.

It's not the only time a tank has been covered in yarn: As part of a 2006 exhibition at Nikolaj Contemporary Art Center in Copenhagen, Danish artist Marianne Jørgensen covered a WWII M24 Chaffee tank (borrowed from the Danish Army) in 3500 pink squares knitted by volunteers. The piece was a protest against the war in Iraq.

On July 19, 2012, a true guerrilla work of art appeared in front of the National Academy of Science in Washington, D.C. A statue of Albert Einstein was completely covered in crocheted pink, purple, green, black and gray yarn. The work was attributed to New York City-based artist Olek, who tweeted an image of the finished product.

There were plenty of pictures taken of the yarn-covered Einstein, but the artwork was dismantled within hours.

Sisters Lorna and Jill Watt are fiber artists who bring color to San Francisco and other cities on a regular basis. In 2013, Lorna was an artist-in-residence for Downtown San Mateo, California. On one municipal cleanup day, she and Jill knitted a bright blue squid around a tree. It took 40 hours and 4 miles of yarn to complete the 15-foot-tall squid—which San Mateo residents loved.

The Watts created these knit-covered monster benches—which they called "Buttmunches"—outside the Ferry Building in San Francisco. Their choice of location was partially about the surroundings, and partially about nostalgia. "Our inspiration was to find a picturesque site in the city where both locals and tourists could enjoy our work," Lorna wrote on the sisters' website. "The Ferry Plaza is also sentimental to us since we have fond memories from the '80s of taking the ferry to the Embarcadero to have lunch with our grandfather who worked at PG&E. Our mother also worked near the Embarcadero, and we’ve been going there since we were kids."

The process of creating the bench coverings—which required 3 miles of yarn, 30 hours to create, and three hours to install—was filmed for the CCTV-America show Full Frame in 2014. "We knit the bodies, arms, legs, and mouths on the Bond Ultimate Sweater Machine with Knit Picks Brava Sport and some value acrylic from the craft store," Lorna wrote. "We crocheted the hands, feet, eyes, teeth, horns, and other details using more value acrylic from our stash." You can see photos of people enjoying the benches here.

Stephen Duneier is a hedge fund manager and financial consultant, but he’s also an artist known as the Yarnbomber. His art installations in the mountains around Santa Barbara, California, are created to attract people to the great outdoors, and are not only permitted, but encouraged by the U.S. Forest Service. Duneier and his volunteer assistants cover trees and boulders with crocheted blankets, making them stand out from their surroundings. Each installation is only up for nine days, so finding one is like discovering a treasure for those willing to hike through the landscape.

The Ladies Fancywork Society of Denver crocheted a complete cover for a travel trailer in 2013. "We joined hooks forces and we made it, several hours of crocheting plus 5 days of installation,"one of the bombers wrote on her website. "Most of the yarn is from leftovers, donations from other crocheters or knitters, our own donations."

In August 2013, the Andy Warhol Bridge in Pittsburgh was covered in knitted, woven, and crocheted blankets in honor of the 85th anniversary of the artist’s birth. Volunteers, under the direction of Pittsburgh artist Amanda Gross, spent 14 months making the panels to cover the 1061-foot-long bridge. The Knit the Bridge Project was conceived to highlight Pittsburgh as a city of bridges and steel, and to bring the community together to create accessible art. The bridge remained decorated for about three weeks. You can see more pictures at Pittsburgh magazine. 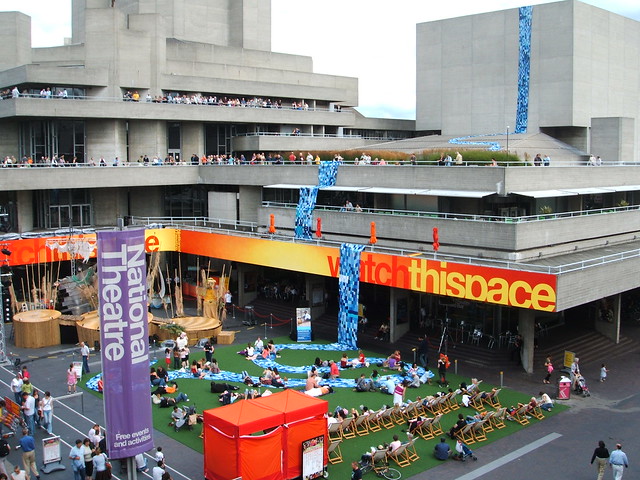 From 2006 to 2007, the London-based I Knit partnered with WaterAid on Knit a River, a project meant to draw attention to the more than 1 billion people who lack access to clean water. "The sole purpose of the project was to create something to show off at WaterAid events as a means to grab public attention and to engage people with their vital work," I Knit says on its website. An estimated nearly 100,000 patches were knitted by volunteers worldwide. The knitted "river" made appearances at events across the UK, but the largest section was part of the 2007 Watch This Space Festival. According to I Knit's website, during that event the river was "draped like a waterfall from the roof of the National Theatre on London's South Bank," and made for "a spectacular sight!" You can see more photos here.

For its 2014 "Feels Good to Be You" ad campaign, 7Up recruited Austin-based urban knitter Magda Sayeg to yarnbomb both an entire square in Santiago, Chile, and a double-decker bus in London. According to DesignBoom, covering the bus required "20 suitcases full of vibrantly hued yarn."

Knitting, Sayeg said in a behind-the-scenes video about yarnbombing in Santiago, helps people "stop and smell the roses. You're desensitized by your surroundings, and then you add knitting, and you kinda look at it. You look at it differently."

This story originally ran in 2016.