There are an estimated 400,000 plant species growing on our planet, exhibiting a huge variation of colors and shapes. They range in size from microscopic algae that look like snowflakes to giant sequoia trees hundreds of feet tall. Some species have even evolved to look like an entirely different type of living creature altogether, whether as an adaptation that provides an evolutionary advantage or just as a happy quirk of nature. Either way, here’s a selection of plants that we think look a lot like animals.

Native to the mountainous regions of Ecuador, Colombia, and Peru, this rare orchid flower (pictured above) bears an uncanny resemblance to a monkey’s face. Its scientific name, Dracula simia, stems from the two long spurs that sprout from its blossoms like vampire fangs, while “simian” means monkey in Latin. Blooming all year round, the orchid also emits a scent like ripe oranges.

The bee orchid attracts male bees for pollination by mimicking a receptive female. As well as producing a scent that the male bee confuses with the alluring odor of a potential mate, its petals also resemble the female’s shape. When the male mistakenly tries to mate with the object of its affections, it also transfers pollen to the flower.

The kangaroo paw is a group of 12 species of perennials whose clusters of flowers are said to look like the paws of a certain famous marsupial. The flowers are prized for their bright red and green colors, but the plant can only be found in the southern areas of Western Australia.

Also known as the Italian orchid, this flower has clusters of petals that look like cute little naked men. Flowering in April and May, it can grow up to 20 inches in height, but requires deep, rich soil. 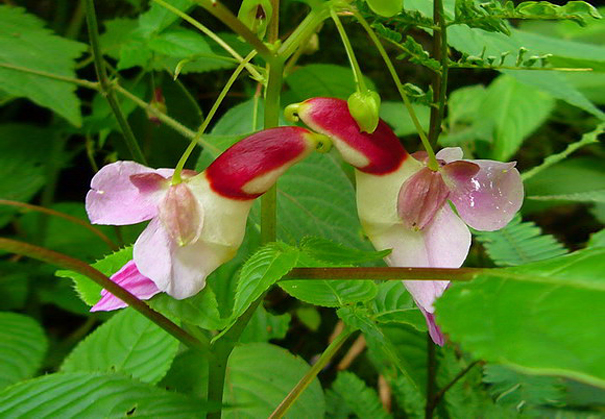 With petals that resemble a flying parrot, Impatiens psittacina can be found growing wild in Thailand, Myanmar, and northeastern India. It was cataloged by British botanist Joseph Dalton Hooker after seeds were presented to Kew Gardens in 1899. Hooker was able to describe the flower in 1901 once it had produced flowers. Because the Thai government has prohibited its export, it remains a very rare species.

Growing wild in eastern and southern Australia, this small orchid looks just like a flying duck preparing to make a landing. It can be found in eucalyptus woodland in coastal or swampy regions and was first collected in 1803 at the site of the Sydney Opera House.

Not only is this orchid remarkable for looking like a little white dove, it apparently smells a lot like beer. Unfortunately it’s become so rare that it’s now on the official list of endangered species. Organizations in its native Panama, where it’s the national flower, are working hard to rescue it from extinction.

There’s no mistaking the bird-like shape of this delicate white flower, which grows primarily in China, Japan, and Korea. Also known as the fringed orchid or sagiso, it’s the official flower of Setagaya ward in Tokyo.

The moth orchid’s Latin name means “Phalaen-like,” referring to a genus of large moths, Phalaena, that this flower is said to resemble. The moth orchid (Phalaenopsis) is a genus too, with more than 60 species. However, when viewed close-up it can also look very much like a bird in flight. This floral beauty is native to southeast Asia and northern Australia.

Looking very much like a swarm of butterflies in flight, the red butterfly wing is a rare tropical flower from Southeast Asia. Despite its rarity, it’s reportedly quite easy to grow, although fresh seeds can be difficult to get hold of.

Like the bee orchid, the fly orchid relies on insects mistakenly trying to mate with it to achieve pollination. Although in this case it attracts male wasps and bees by producing a scent that mimics female sexual pheromones, while the flower itself resembles a fly.