If you've ever stepped foot in a gym, grocery store, or sporting arena, then you've probably heard of Gatorade. The drink has been around for half a century and is now sold in over 80 countries, but how much do you know about the drink that changed sport culture and the way we treat dehydration?

1. IT WAS INVENTED TO HELP THE FLORIDA GATORS FOOTBALL TEAM STAY HYDRATED.

This may seem like common knowledge to some, but in 2002, 60 percent of people surveyed had no idea that there was a connection between Gatorade and the University of Florida football program. After 20 football players were sent to the infirmary for dehydration in a single weekend during the 1960s, the college's coaching staff expressed concern about the health of the UF student athletes. They met with Dr. Robert Cade, who began experimenting on the players to develop a drink formula that would replenish the electrolytes lost during long periods of physical activity in the hot Florida sun.

2. IT WAS VERY EXPENSIVE TO DEVELOP.

The first batch of Gatorade cost $43 to make back in 1965, which is approximately $325 when adjusted for inflation. After seeing the results of the “magic elixir,” head coach Ray Graves requested that more be produced, ”no matter what it costs.”

3. IT ORIGINALLY TASTED TERRIBLE, BUT PLAYERS DRANK IT ANYWAY.

A researcher reportedly vomited after trying the experimental drink, and players said that it tasted like “bodily waste,” but they drank the product anyway for the health benefits. Eventually, Dr. Cade’s wife, Mary, suggested that they add lemon juice to the mixture to improve the taste.

4. THE SUPER DRINK SAVED LIVES AT A FLORIDA HOSPITAL DURING EARLY TESTS.

After being tested on football players, Gatorade was given to babies at the UF Health Shands Hospital who were being treated for dehydration. According to Dr. Cade’s daughter, Phoebe Cade Miles, “there used to be hundreds of babies admitted for severe dehydration, many of whom died, and this changed overnight.”

Almost every big victory in the NFL today is celebrated with players dumping a cooler of ice-cold Gatorade on their coach. The person often credited as the pioneer of the Gatorade shower is New York Giants defensive tackle Jim Burt, who gave one to head coach Bill Parcells in 1985 after defeating the Washington Redskins.

6. MICHAEL JORDAN WAS THE FIRST CELEBRITY TO ENDORSE GATORADE.

Previously on Team Coca-Cola, Michael Jordan was offered $1.4 million per year for ten years in 1991 to be the face of Gatorade. “They had Elton John and Whitney Houston making millions, I don’t understand why they wouldn’t pay Michael the same,” said Jordan’s former agent, David Falk, about Coke. Jordan’s performance on the court, widely popular campaigns, and ads like the “Be Like Mike” commercial above made the partnership extremely profitable.

7. THEY SPONSOR EVERY SINGLE TEAM IN THE NFL.

The Kansas City Chiefs tried Gatorade in 1969 on recommendation from coach Grave from the Florida Gators. Fourteen years later, Gatorade became the official sports drink of the NFL and is currently the only company that sponsors all 32 teams in the league.

8. THERE WAS A GATORADE AND BEER CONCOCTION CALLED HOP'N GATOR. 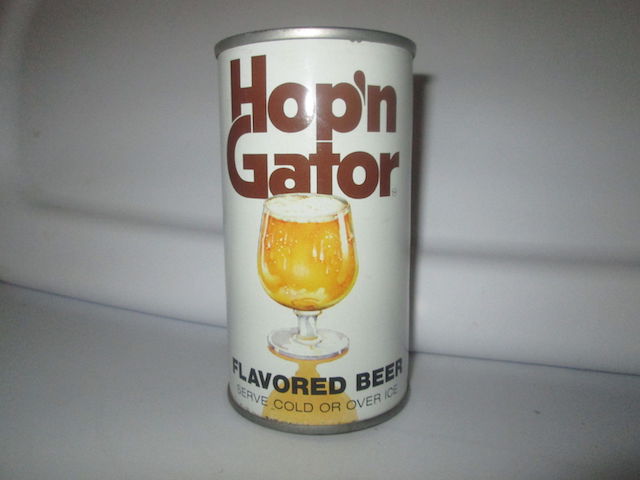 Dr. Cade sold a drink recipe to the Pittsburgh Brewing Company, which sold the alcoholic beverage until the mid-1970s. Hop’n Gator was last produced in 2004 as a special batch of 10,000 barrels and has not been made since.

9. GATORADE ORANGE IS NOT THE SAME AS FLORIDA GATOR ORANGE.

According to a 2009 Style Guide for the Gatorade “G Bolt” logo and related packaging, the official orange of Gatorade is number 1505 in the Pantone Matching System (PMS), but the lightning bolt has a red (PMS 185) outline that makes the orange appear lighter. [PDF] The shade of orange used by the University of Florida is PMS 172.

10. AN ESTIMATED 100 BILLION OUNCES OF GATORADE ARE SOLD EACH YEAR.

That's according to a 2005 estimate by ESPN.com business reporter and author of the First in Thirst: How Gatorade Turned the Science of Sweat Into a Cultural Phenomenon, Darren Rovell. That much Gatorade could fill over 1,000 Olympic-sized swimming pools.