On September 15, 1835, a young naturalist named Charles Darwin arrived at the island chain that would shape his theory of natural selection. "The natural history of this archipelago is very remarkable," he later wrote in his account of the journey. "It seems to be a little world within itself."

That archipelago was the Galápagos, an equatorial cluster of islands 600 miles off Ecuador’s west coast. It’s the site of one of the most unique wildlife populations on earth, as well as some fascinating human history. Here are 11 facts you may not have known about the islands.

1. THERE ARE AT LEAST 13 SPECIES OF DARWIN’S FINCHES.

The Galápagos is home to giant tortoises, marine iguanas, and blue-footed boobies, but the creatures that arguably left the greatest impact on Darwin were his finches. Their extraordinary diversity in beak shape was a clue to the naturalist that species may evolve new traits to suit their surroundings over time. Different species sport beaks adapted for different tasks such as devouring fruit, pecking at seeds, and even using cactus needles to dislodge grubs from trees. One of the most famous finches on the island is the Geospiza difficilis, or "vampire finch." It earned the nickname for its nasty habit of using its sharp beak to peck blood from other birds.

2. THE FIRST PERMANENT RESIDENT ARRIVED IN 1805.

Decades before the HMS Beagle made landfall on the Galápagos, an Irishman named Patrick Watkins took up permanent residence on one of the islands. "Irish Pat" lived on Floreana Island between 1805 and 1809 and is believed to be the archipelago’s first human settler (the discovery of what could be pre-Columbian shards on the islands in 1953 has proven inconclusive). He reportedly spent most of his time on the island drinking rum and growing vegetables to barter with the whalers who passed through. Whether Watkins was marooned on Floreana or asked to be left there by choice is still up for debate.

3. IT’S UP TO TOURISTS TO DELIVER THE MAIL.

For centuries, residents of the Galápagos have used a barrel full of disorganized mail in place of a formal postal system. The practice originated in the 18th century when sailors stopping on Floreana Island stationed a barrel there for depositing letters. Whalers who visited the island before returning home would pick up letters addressed to their destinations and deliver them once they arrived. The island is still home to a mail barrel today, although it's no longer used by whalers. Tourists who visit the island are responsible for sorting through the mail and grabbing any parcels they can deliver on the way to where they’re headed. No stamps are required, and the honorary postal workers even pick up mail on Sundays.

The Galapágos tortoise is a remarkable creature–it’s capable of living up to a year without anything to eat or drink. Tragically, this survival adaptation is also what made it an alluring piece of cargo for sailors. Tortoises were harvested by visitors to the islands as both a source of fresh meat and oil. An estimated 100,000 to 200,000 tortoises were slaughtered over the span of two centuries, and three (possibly four) subspecies are now extinct. Today 20,000 to 25,000 tortoises populate the islands.

5. THEY’RE HOME TO THE ONLY PENGUIN NATIVE NORTH OF THE EQUATOR.

Parts of the Galápagos just barely peek over of the equator, but that’s all it takes to make the Galápagos penguin the only member of its group native to the top hemisphere. Its closest neighbor is the Humboldt penguin of Peru.

6. VISITORS LOOKING FOR A TOILET ARE OUT OF LUCK.

National Park enforces a strict "take nothing, leave nothing" policy. The rule even applies to poop, which is teeming with millions of unique bacteria from non-native sources and can take up to a year to biodegrade. If visitors to the park find themselves in desperate need of a toilet, their best bet is to head for a boat or the residential areas that make up 3 percent of the archipelago. There are no toilets on the parklands, so in worst-case scenarios guests will be told to "dig a hole and cover the sample."

7. THE CENTIPEDES ARE BIG ENOUGH TO EAT RATS. 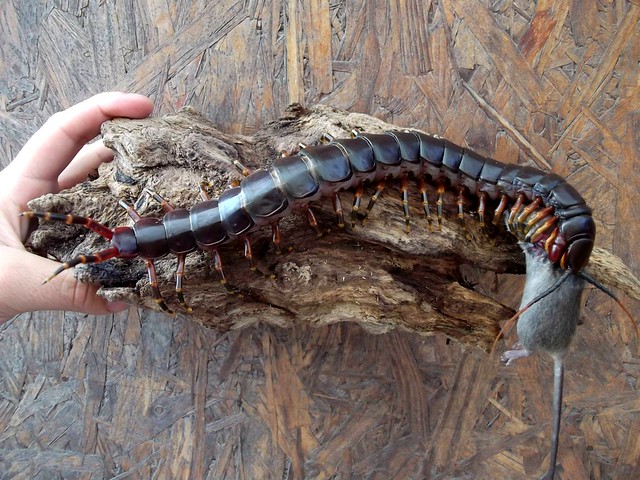 or "Darwin’s Goliath Centipede" is one of the largest centipedes found on the planet. It can grow to be nearly a foot long and has been known to prey upon lizards and small rats.

Both Sullivan Bay and Bartolomé Island in the Galápagos are named after the same person: Sir Bartholomew James Sulivan. Sulivan served as the principal surveyor and second lieutenant aboard the HMS Beagle when he was in his 20s. The young shipmate was apparently charming enough to earn the lifelong friendship of Charles Darwin and inspire Captain Robert FitzRoy to name a bay after him.

9. THE IGUANAS CAN SWIM.

On land, the Galápagos’s marine iguanas aren’t much to look at (Darwin characterized them as "disgusting, clumsy lizards"). But in the ocean they’re surprisingly graceful. The species is the only marine lizard on earth. They usually limit their hunts to shallow waters, but they’re capable of reaching depths of 50 feet or more.

10. THEY INSPIRED A HERMAN MELVILLE NOVELLA.

Herman Melville’s years at sea served as the inspiration for Billy Budd, Sailor; Moby-Dick; and a lesser-known work of his titled The Encantadas. He visited the island chain as a young sailor just a few years after Darwin first arrived. The novella based on the experience doesn’t present the landscape through rose-colored glasses. He writes:

“[...] the Encantadas refuse to harbor even the outcasts of the beasts. Man and wolf alike disown them. Little but reptile life is here found: tortoises, lizards, immense spiders, snakes, and that strangest anomaly of outlandish nature, the iguana. No voice, no low, no howl is heard; the chief sound of life here is a hiss.”

"The Encadatas" was published as a series of 10 sketches in Putnam’s, then later as part of book of stories. Despite the story’s positive reception, it did little to help the author’s financial struggles.

11.THEY WERE ONCE HOME TO "THE RAREST ANIMAL ALIVE."

Of all the animals that have called the Galápagos home, none were as famous as Lonesome George. It’s estimated that the Pinta Island tortoise was born around 1910, and he was discovered by a Hungarian scientist in 1971 when the species was long thought to have been extinct. After bringing George back to the park’s tortoise center, scientists held out hope they would find a female specimen for him to breed with. They had no such luck, and eventually resorted to pairing him with female tortoises who were closely related to the Pinta. Decades went by without him producing any offspring, and in 2012 he died having been known as the rarest (and perhaps the loneliest) creature on Earth. His preserved body was later put on display at the American Museum of Natural History, before being returned to the Galapagos.