Many, many animals eat plants—but carnivorous plants bite back. Read on to find out why these plants eat meat, why a Venus flytrap knows how to count, and why one plant rents itself out as a bat hotel … in exchange for poop.

Don’t panic. Unlike Audrey II in Little Shop of Horrors, real meat-eating plants only eat tiny creatures. Most of them snack on insects and other small organisms, and the largest ones can manage, at the most, a rat. They’re found all over the world, on every continent except Antarctica, and as far north as Alaska and Greenland. Some carnivorous plants even live near large urban centers if they can find the right piece of habitat. This means that you may be able to see some in the wild near you: Just contact a local nature center and ask if they have any programs on carnivorous plants.

Most plants make their own food largely by basking in the sun, which is a pretty sweet deal. So why would they also catch animal prey? Plants can’t survive on sunlight alone: They also slurp up nutrients, such as nitrogen and phosphorus, with their roots. But carnivorous species live in places where the soil is nutrient-poor. Their meaty diet helps them grow faster and gives them better reproductive success. In fact, it’s such a clever strategy that …

Through the course of evolution, plants have stumbled across the carnivorous lifestyle at least nine different times. They’ve even evolved a whole diversity of trapping methods: Snap traps, pitfall traps, sticky goo, and more. These traps are made of leaves—highly modified, specialized leaves.

4. THEY HAVE PRETTY FLOWERS, TOO.

Meat-eating plants don’t just woo animals for food. They also need to attract insects that’ll spread their pollen. That’s why many of them have colorful flowers. To make sure that the pollinators don’t actually become dinner, the plants often hold their blooms high above the leaves and well away from the traps.

5. SOME OF THEM HAVE TENTACLES.

Several plants catch insects with sticky tentacles. Some of them keep their tentacles motionless; these include Australia’s rainbow plants, which are named for the way that sunlight glints off their sticky goo. Others actively wrap their tentacles around their prey. These include the sundews, which are also named for the way sunlight glints off their sticky goo.  One sundew, Drosera glanduligera, goes the extra mile. Its tentacles snap when touched, catapulting prey into the sticky center of the leaf. See it in action here.

6. SOME ARE LIVING FLYPAPER.

have flat, sticky leaves that function like a cross between flypaper and a stomach. When insects land on a butterwort’s leaves, they get stuck in goo that’s excreted by sticky glands. The plant releases digestive enzymes and absorbs those tasty bug nutrients.

7. SOME HAVE PITFALL TRAPS.

Many plants catch their food by setting out pit-shaped traps and eating whatever falls in. It’s a popular technique that has appeared at least six separate times over the course of plant evolution. Why doesn’t the prey just crawl out of the trap? The pot-shaped leaves generally have particular adaptations, such as downward-pointing hairs, that make escape difficult at best. A lot of these plants, like the pitcher plants in the genus Nepenthes, contain pools of water that drown and digest their prey.

8. BUT THEY AREN’T JUST POOLS OF DEATH.

9. PITCHER PLANTS GIVE BATS A ROOST—IN EXCHANGE FOR POOP. 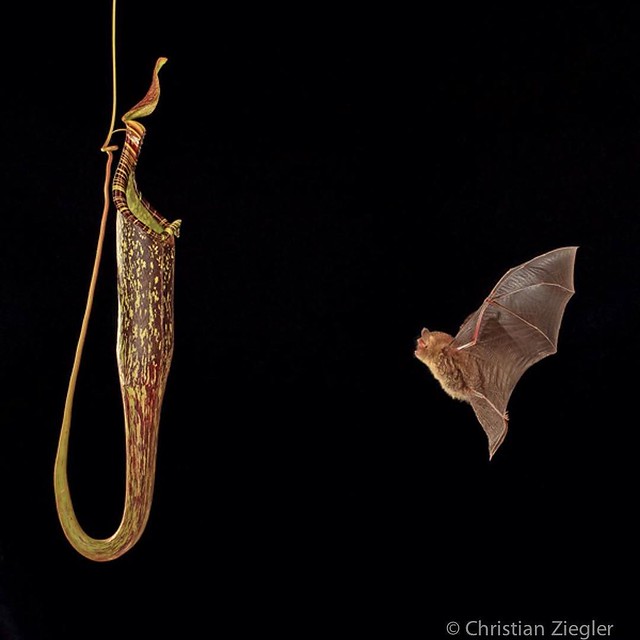 When the common woolly bat is looking for a rest, it snuggles up inside a pitcher plant’s pitcher-shaped trap. The bat gets a place to sleep, and its poop gives the pitcher plant much-needed nutrients. This is such a good deal that the plant grows two kinds of pitchers: One for snagging bugs, and one for poop. The first kind, which sprouts closer to the ground, is perfumed, slippery, and full of digestive fluid, which makes it perfect for catching and eating bugs. The other type grows higher up and is more like a cozy hotel room.

And here’s the most amazing part: Those hotel room pitchers have a special reflector dish shape. When the bat uses its sonar system to explore the forest, the plants stand out like a neon VACANCY sign.

10. SOME CARNIVOROUS PLANTS HAVE SNAP TRAPS.

The most famous type of carnivorous plant is probably the Venus flytrap. Its trapping method looks pretty simple: A bug walks in and the leaf snaps shut like a set of green jaws. But how does the plant know to clamp down on insects and not just, say, dead leaves that fall from above?

It turns out that the Venus flytrap can count. Its gaping maw is full of little trigger hairs. When an insect touches a hair, a timer is set. A crawling insect will probably touch another hair, at which point the trap is sprung. Once five hairs are triggered, the Venus flytrap starts spewing out digestive liquid.

There’s another, less famous plant that uses a similar method to catch its prey. The waterwheel plant is basically an aquatic, rootless Venus flytrap. It eats tiny swimming critters and closes its traps incredibly quickly, considering that it always has a mouth full of water.

True to their name, the aquatic bladderworts are covered in little bladder-like traps. The outsides of the bladders have trigger hairs. When a swimming critter touches a hair, the trap springs open and sucks them in. These bladders work so quickly that scientists need cutting edge high-speed cameras to capture the action. Above the water and far from the carnage, the plants make beautiful, delicate flowers.

12. SOME USE LOBSTER TRAPS.

work because they have a funnel-shaped entrance that opens into a larger chamber. It’s easy for a lobster to crawl in, but hard for it to find the exit. Some carnivorous plants catch meals in the same way. Genlisea species seem to use this method; they have root-like leaves with a complicated spiral structure that usher tiny creatures to their doom.

Many carnivorous plant species are at risk. Threats include habitat loss, pollution, and poaching. Yes, you read that right. Just like rhinos and elephants, plants are at risk from poachers who sell them to collectors.

Venus flytraps, for example, live in just a relatively small region around Wilmington, North Carolina. Poachers dig them up and sell the plants for a small amount of cash. The problem has gotten so out of hand that stealing flytraps is now a felony punishable by over a year in jail.

To find a great model of carnivorous plant love, we need look no further than Charles Darwin. The famous scientist studied them, published a book on them, and even defended them in letters. In a note to the botanist Asa Gray, Darwin raved about Drosera, a.k.a. the sundews: “Depend on it, you are unjust on the merits of my beloved Drosera: it is a wonderful plant, or rather a most sagacious animal. I will stick up for Drosera to the day of my death.” And in a letter to the geologist Charles Lyell, he declared, “at this present moment I care more about Drosera than the origin of all the species in the world.”