Curiosity and Its Big Brothers

When the Curiosity rover landed on Mars, we were all excited. Victory! The engineers at NASA's Jet Propulsion Laboratory and the many companies that worked with it saw seven years of effort pay off in one nail-biting event. It was glorious! But then I started to see some Tweets and some forum comments that sounded like some people were celebrating the fact that we landed on Mars ...as if it had never been done before. Au contraire! Let's look back at some of the many Mars missions, probes, and rovers that paved the way for Curiosity.

The Voyager Mars program was the first U.S. planned mission to Mars, conceived in 1960. The initial plan was to send unmanned spacecraft to orbit both Mars and Venus, with launch capsules to deploy to the surface of each planet. Several Mars missions were proposed throughout the 1970s. The program was delayed by the sudden mandate to land men on the moon, and Voyager Mars was eventually completely scrubbed. 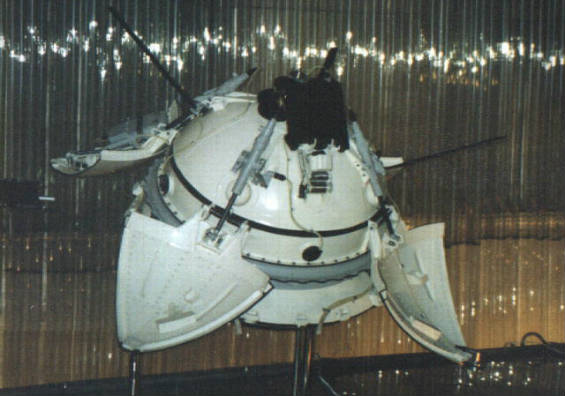 The first man-made object to actually land on Mars was the Soviet Mars 2 probe, which crashed into the Martian surface on November 27th, 1971. The first successful landing was the Soviet Mars 3, which achieved a soft surface landing on December 2nd, 1971. Both probes had been en route to Mars for a year. The Mars 3 mission was short: the lander transmitted data from the surface for 14.5 seconds before system failure. The reason for the failure has never been completely determined. The photo above is a model of the Mars 3 lander. The Soviet Mars 6 lander transmitted 224 seconds of data as it approached Mars, but stopped transmission at either impact or slightly before impact on March 12th, 1974. 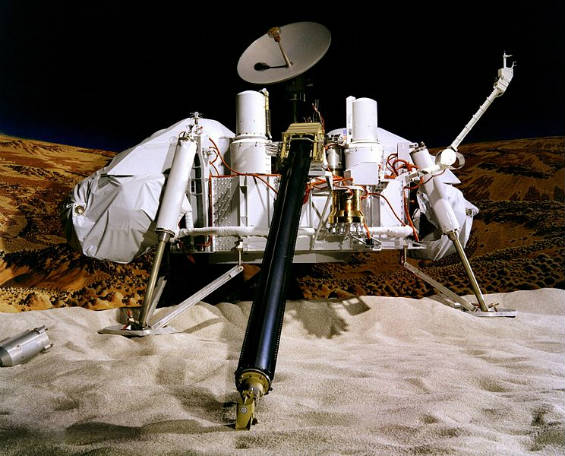 NASA's Viking Program was America's first successful mission to the Martian surface, consisting of two orbiters and two landers. The Viking 1 orbiter reached Mars in June of 1976 and spent the next few weeks searching for a nice spot to land. The Viking 1 lander touched down on July 20th, 1976 -exactly seven years after Apollo 11 landed on the moon. On September 3rd, the Viking 2 lander separated from its orbiter and also reached the surface. The two orbiters and the two landers all transmitted data and images from Mars for years before going out of service. Shown above is a model of the Viking lander. 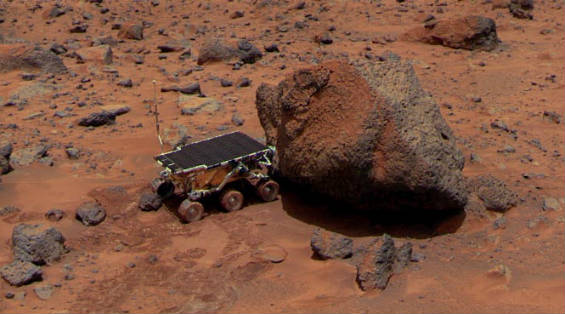 The Mars Pathfinder mission landed on the planet on July 4th, 1997. The lander used an experimental "airbag" landing, and bounced 15 times, coming to rest a kilometer from its initial point of impact. Once on Mars, the lander became a base station named the Carl Sagan Memorial Station (the renowned astronomer had died only a few months earlier). Inside the station was the first NASA Mars rover, named Sojourner. Sojourner moved around the Martian surface at one centimeter per second, but hey, it moved! No other Mars probe had done that before. Sojourner inspected Martian rocks, which were named after cartoon characters. In the picture above, the river is taking Alpha Particle X-ray Spectrometer readings on a rock named Yogi. The Pathfinder mission transmitted thousands of images and huge amounts of data, ending on September 27th, 1997. The station and the rover had worked months past what was expected of them. 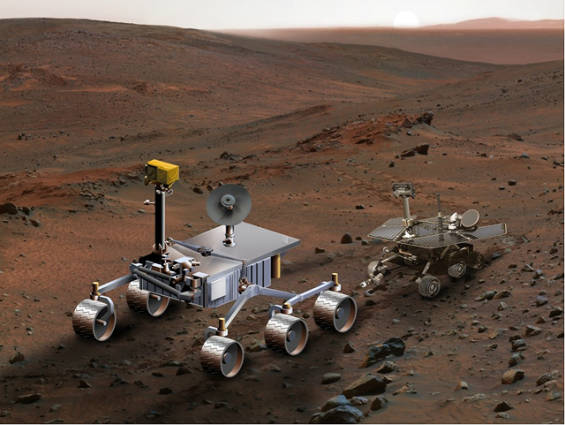 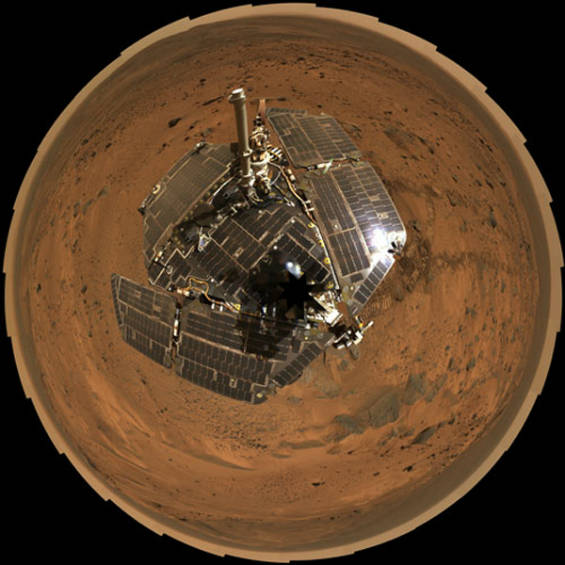 Spirit (MER-A) was "the little rover that could." It landed on Mars on January 3, 2004, after a seven-month space flight. Spirit was expected to examine its surroundings and send data back to Earth for about 90 Martian days. However, Martian wind unexpectedly removed dust from the rover's solar panels, allowing them to generate energy far longer. In fact, Spirit continued to roam the planet, analyzing rocks and dust for five years! In 2009, the rover became stuck on the Martian surface and couldn't move, but Spirit continued to analyze its surroundings and communicate with Earth for another year. In early 2010, the fading solar generator was put into hibernation mode, because the Martian winter was coming when little sunlight available would be available for recharging. Engineers did not hold much hope for reviving Spirit, and it was not to be. In 2011, NASA decided to officially close the books on the Spirit rover. The image above is Spirit's "self-portrait." 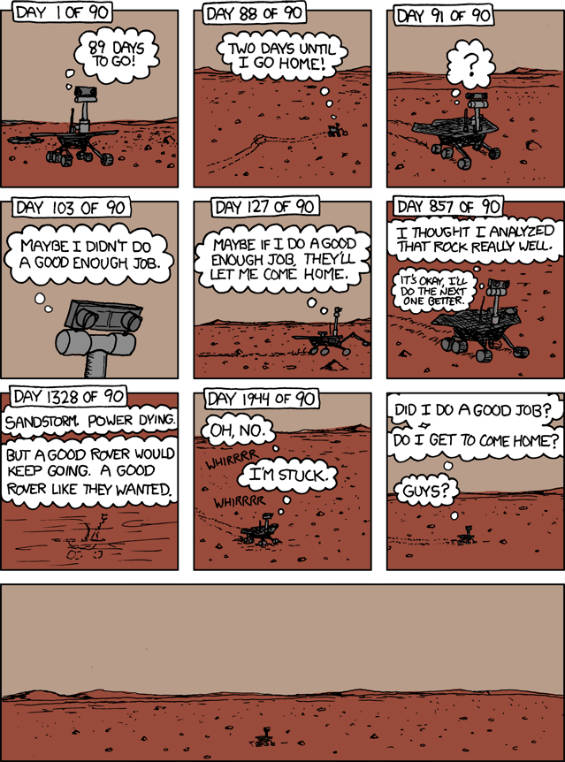 Spirit was very popular during its day in the sun. Randall Munroe of xkcd illustrated the story of Spirit in a way everyone could relate to, and even now makes people (like me) tear up. Pixar couldn't have come up with a more melancholy plot.

The Opportunity rover touched down on January 25th, 2004, on the opposite side of Mars from its twin Spirit. Like Spirit, it was expected to carry out a 90-day mission under solar power, but continued to generate its own power long afterward. The incredible thing about Opportunity is that eight years later, it is still powered up and exploring Mars, and still transmitting data back to NASA! The panorama shown here was stitched together from 817 images taken by Opportunity in December 2011. 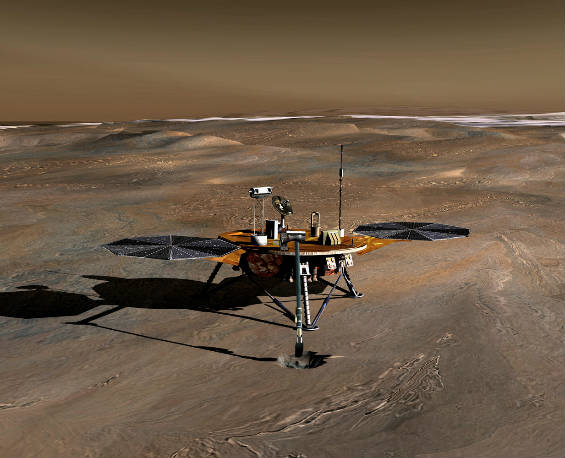 The Phoenix Mars rover was sent to the polar region of Mars specifically to look for evidence of water. It landed on the red planet on May 25th, 2008. The mission was a cooperative effort between the Lunar and Planetary Laboratory at the University of Arizona and NASA's Jet Propulsion Laboratory. In June, the Phoenix robotic rover identified frozen water in a Martian soil sample, which was hailed as one of the biggest discoveries in history. Phoenix made the announcement over its Twitter feed.

Like the other solar-powered Mars rovers, Phoenix exceeded its expected lifetime, and continued to relay data after all its planned experiments were carried out. The mission was ended in 2010.

The current mission to Mars is called MSL, for Mars Science Laboratory. Of course, we called it Curiosity. That's the nickname of the newest Mars rover that has captured the world's imagination, possibly because of its strange and different method of landing, which was publicized in a video called Curiosity's Seven Minutes of Terror.

But the Curiosity rover landed exactly as was planned. Here's what the rover saw as it approached and landed on the planet.

Curiosity is bigger and heavier than previous rovers, and its mission is to assess whether conditions have ever been right for the existence of life on Mars, and to collect data for a future manned mission. You can follow the Curiosity Mars rover mission at NASA. 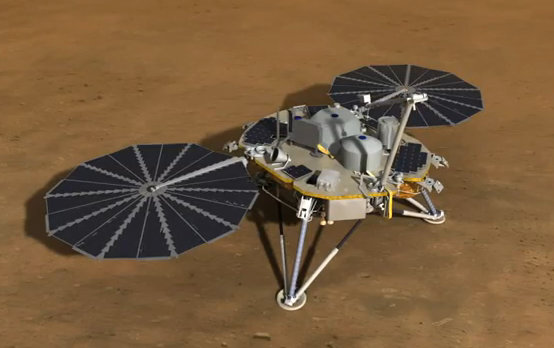 The next mission to Mars is named InSight, and its launch is planned for the year 2016. It promises to be as exciting as all the other Mars missions.