Last week I noticed that I'd seen more than one awesome cake decorated on the theme of the TV show Game of Thrones. Actually, I could count several, so obviously there were even more such cakes on the internet. Has any other TV show inspired so many bakers to make cakes? Maybe Star Trek, but that's a much older show (and an idea for another list). Here are eleven Game of Thrones cakes for your admiration. Possible spoilers ahead for those who plan to watch the already-aired episodes in the future.

1. Redditor jeffois posted this picture of an Iron Throne cake made by a friend -not a professional baker. The throne was hand-made out of swizzle-stick swords! But of course, the first thing everyone notices is the spilled blood, er, I mean sweet red icing garnish. 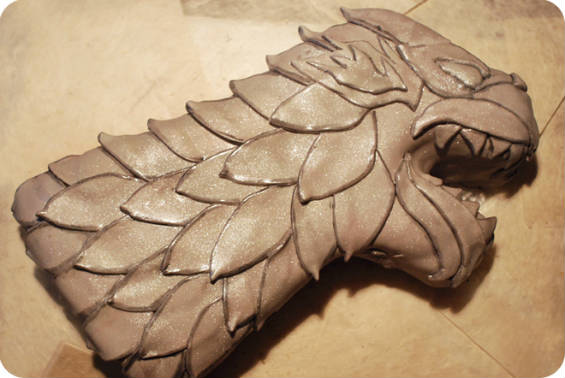 2. Melissa at Suburbanitis made a cake for her husband's birthday featuring the direwolf sigil of the House of Stark. The shiny finish is the result of using pearl dust, which she describes as "edible dust glitter." Purely awesome! 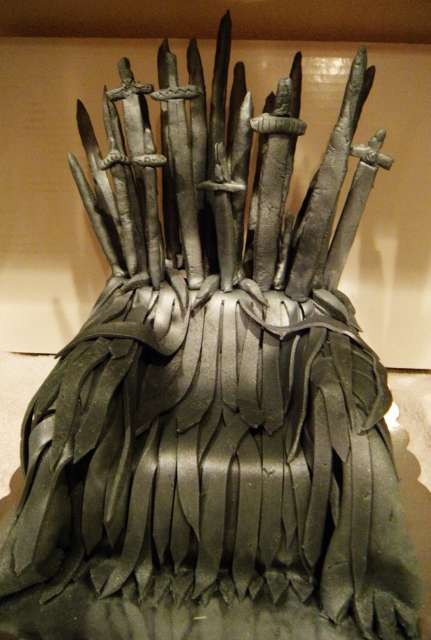 3. The Iron Throne cake created by Stephanefalies is decorated with fondant, popsicle sticks, and spray-on color. She posted all the steps for making it at Instructables. 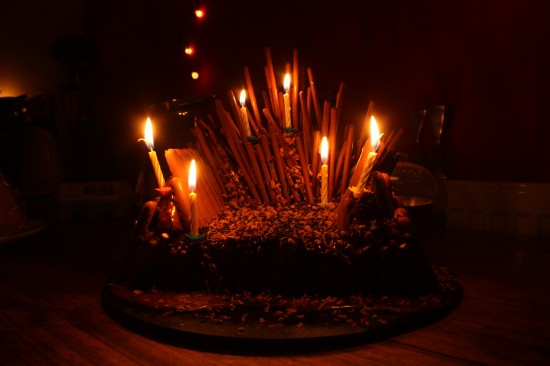 4. Charlotte Narkiewicz made a Game of Thrones cake for Zef’s birthday party. There are no baking details, but it appears the throne is made of pretzels and birthday candles. 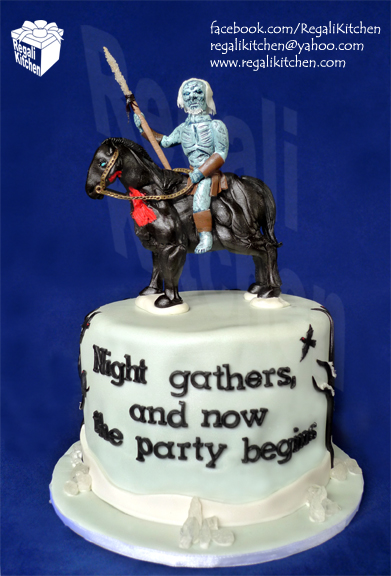 5. Merle and Justine ordered a White Walker cake from The Regali Kitchen in the Philippines to celebrate their 4th anniversary. White Walkers are a legendary race featured in the Game of Thrones mythology. 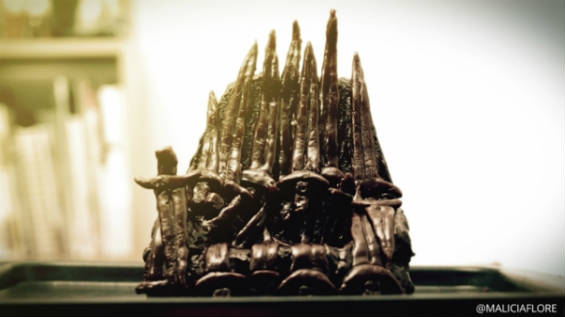 6. Malicia Flore made this throne cake of chocolate! The swords are caramel, and the finished cake is covered in chocolate ganache. Follow the baking and decorating process in a video at Instructables in French (English subtitles available). Yes, her complete recipe is posted in English at Group Recipes. 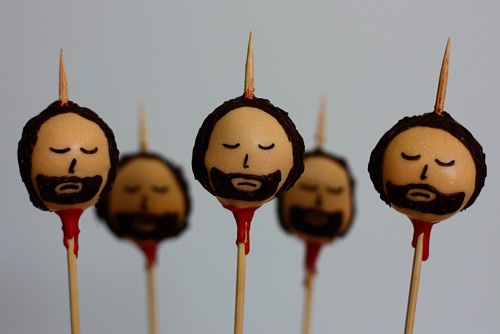 7. After getting over the shock of seeing these Ned Stark Cake Pops, you might want to go to Not Your Momma's Cookie to see exactly how Bakerella made them so you can do it, too! 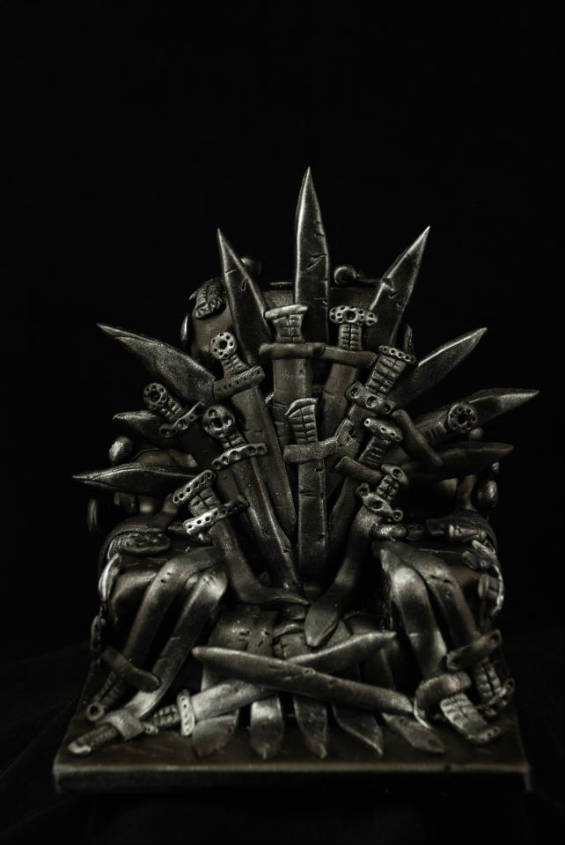 8. Kensei Yonzon posted this photo of a cake he made at The Bunny Baker cake studio in Manila, Philippines. The fondant decoration was made from marshmallows and chocolate. He said it "tastes like lies and deceit, according to the folks we made it for." But we know better. 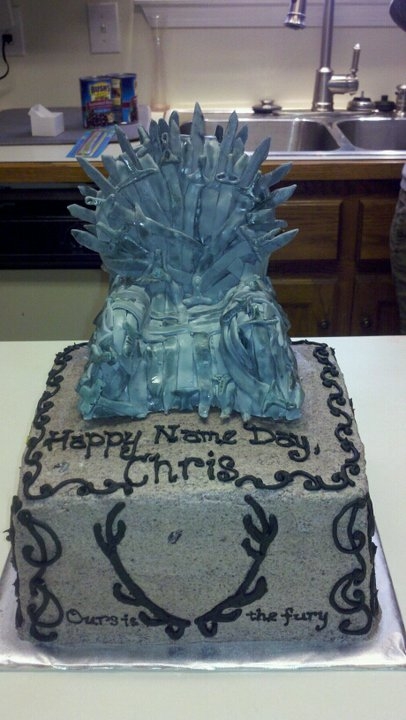 9. This cake was made by audairymaid and posted to Cake Central. It's a cookies-and-cream cake topped with a throne made of RKTs and fondant. RKTs are Rice Krispy Treats. I'm sure the cake was delicious. 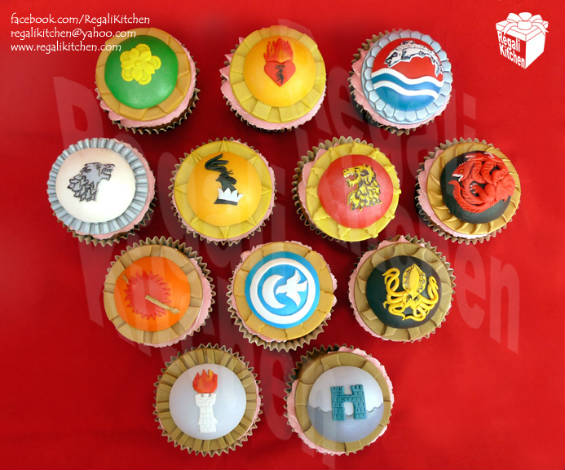 10. Game of Thrones symbolism lends itself to cupcakes, too. The Regali Kitchen made quite a selection of cupcakes with significant logos and symbols on them for Khristian's birthday earlier this year. They even made a video recreating the opening sequence of the show starring their cupcakes! 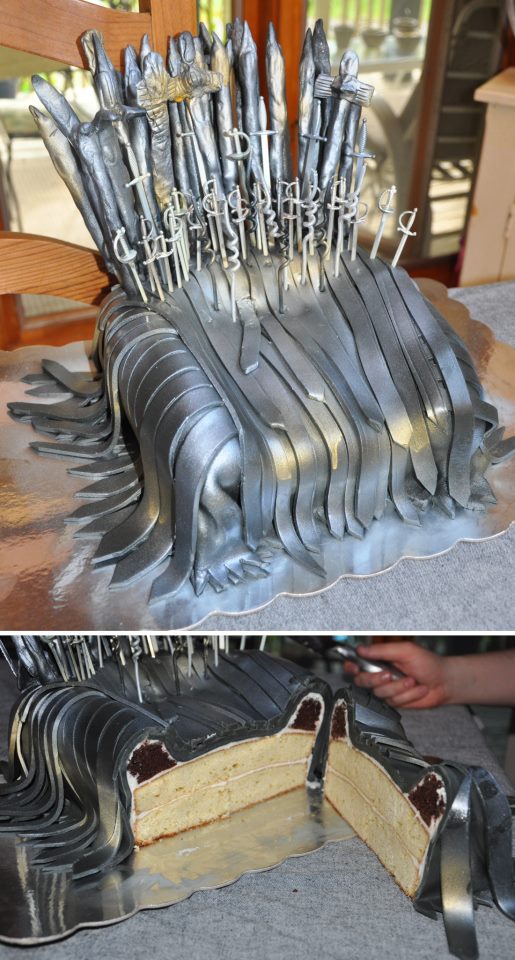 11. Redditor Craptacularama posted this birthday throne cake that was made by a friend's mother. You can see after cutting that there are two flavors of cake underneath the fondant.

There are at least as many Game of Thrones-inspired cookies, which will be another list on another day. There's just something about Game of Thrones that makes people want to cook -or eat!