This is the third installment of legendary monsters of North America, as everyone has their local favorite -or has even seen one of these creatures! Previous posts have legends of other parts of the world, too. Here are more monsters from the stories told around the campfires -and on the internet- in North America.

In 1988, 17-year-old Christopher Davis reported the first sighting of the Lee County Lizard Man. Davis was driving home from work, and had to stop about 2AM near Scape Ore Swamp in South Carolina to change a flat tire. As he was leaving, a 7-foot-tall bipedal creature ran up and jumped on his car! Davis said it had glowing red eyes, green skin, and three clawed fingers on each hand. Davis swerved to throw the monster off, and later found scratch marks on his car. After his tale was told, others came forward with accounts of the creature, and some had auto damage as well. Footprints were found, but were never sent for analysis. Davis took a lie detector test (arranged by his publicity agents), but the results were not released. Stories went nationwide, and tourists came to look for the Lizard Man, but the hubbub died down by the end of the summer of 1988. There are occasional sightings to this day. 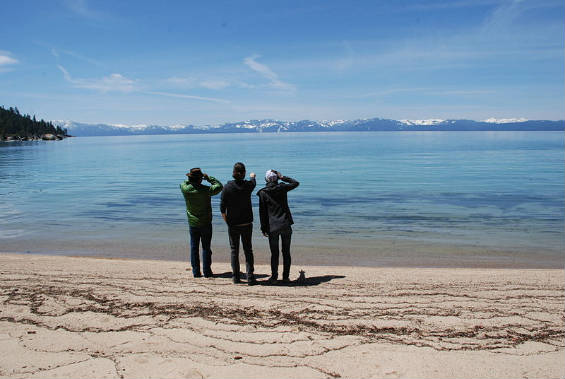 Lake Tahoe is an extremely deep lake in the mountains along the border of California and Nevada. Every year there are several sightings of a monster known as Tahoe Tessie. Reports of the monster go back to Washoe and Paiute legends before the West was settled. Tessie is described as serpentine, which puts her in the same class as Champ in Lake Champlain, Mussie in Muskrat Lake, Chessie in Chesapeake Bay, and other lake monsters. Photograph by Wikipedia user Sierranevadaart. 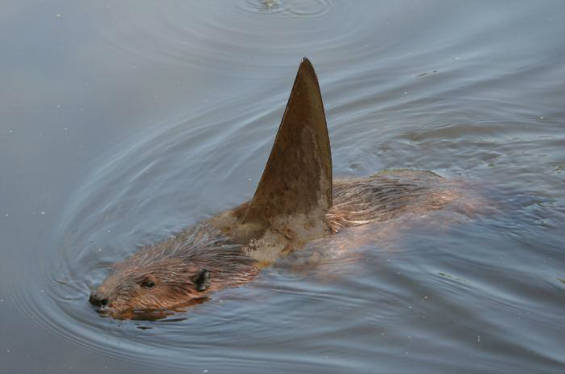 The Beavershark (Maximus bitemus) lives in Black Mountain, North Carolina. Or Pine Mountain, Georgia. Or Maryland. Or South Carolina, depending on where you happen to visit. This creature is three to four feet long, and comes in two varieties: one has the head of a shark and the body of a beaver, the other has the head of a beaver and the body of a shark. You can guess that the former is the more dangerous subspecies. The beaver shark's preferred environments are youth summer camps, especially those with boating classes. However, they also live near tourist destinations and are sometimes found in gift shops.

4. The Beast of Busco The town of Churubusco, Indiana, is called Turtletown due to the obsession with a snapping turtle called the Beast of Busco, which locals just call Oscar. The first reported sighting of the giant turtle was in 1898, by farmer Oscar Fulk. No one else saw the turtle then, but Oscar owes his name to the farmer. Then in 1948, the turtle was seen again, in Fulk Lake. One of several people who reported the giant turtle was the owner of Fulk Lake, Gale Harris, who vowed to find the monster. Witnesses said the shell was as big as the roof of a car! Newspapers picked up the story nationwide, and Churubusco found itself on the map. People came from all over, and on one day alone, 3,000 tourists joined in the search on Harris' farm. No giant turtle was found, but the turtle the newspapers called Oscar is credited with boosting the town's economy, and you'll find artful turtles decorating Churubusco to this day. Churubusco has an annual festival called Turtle Days. Photograph by Flickr user Andy Simonds.

The Pacific Northwest Tree Octopus (Octopus paxarbolis) is an amphibious creature native to the Olympic National Forest in Washington State. They are very elusive and difficult to catch, but predatory birds eat them and have greatly diminished their numbers. The octopus is an endangered species, with an organization devoted to its survival. The site has been used in studies to determine how easily people believe what they see on the internet. 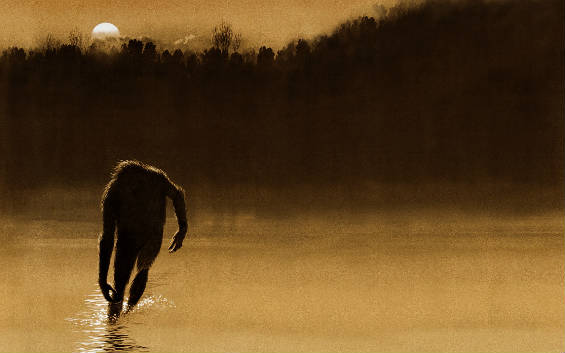 The Fouke Monster is named after the town of Fouke, Arkansas. Sightings have been reported since the 1940s, with a whole slew of sightings between 1970 and 1974. The Fouke Monster is a 7 to 10 foot tall ape-man with long shaggy hair and bright red eyes. It also has a foul odor. An attack on Bobby and Elizabeth Ford in 1971 sparked a frenzy of monster hunting. Three-toed footprints were found around the area, but later exposed as a hoax. The attack by an unknown animal on the Ford family inspired a movie entitled The Legend of Boggy Creek. The 1972 movie is available at YouTube. 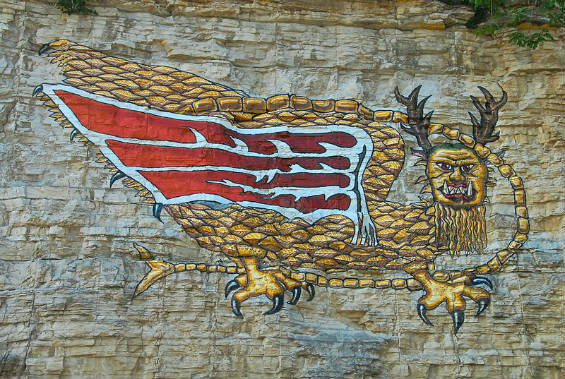 In 1673, a giant pictograph was spotted on the cliffs near Alton, Illinois. The Native American painting depicted a creature described as a dragon bird. If locals were asked about the picture, their answers were not recorded. The bird became known as the Piasa Bird, after a nearby place by that name was documented on a 1797 French map. Other sightings were described, but the image itself was destroyed in the 1870s when lime was quarried there. The story behind the creature is unknown, but there is speculation that it may have been painted by Cahokians, a society that flourished along the Mississippi River, peaking around 1200 CE. An account was publish in 1836 by John Russell that wove a story about the bird that lived on the cliffs and ate people, but most historians presume that he made the tale up. We don't even know for sure what the pictogram looked like, as no photographs are known to exist, and contemporary sketches have been lost -but not before they were copied by hand. These copies were used to recreate the painting on a cliff not far from the original site. Photograph by Wikipedia user Burfalcy.

8. The Melon Heads of Kirtland 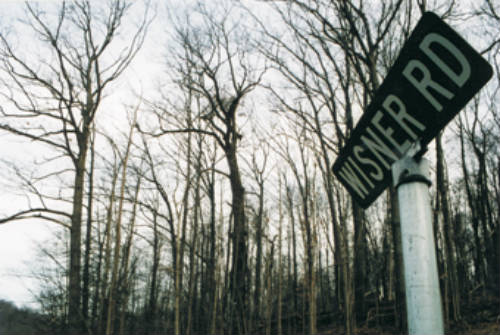 Kirtland, Ohio, is a suburb of Cleveland. The story of the Melon Heads has been told for generations. A doctor named Crowe ran a facility in the 1800s (as the story goes) where he kept 1. hydrocephalic children, or 2. unwanted children used as experimental subjects, in which he injected them with a substance that made their heads swell. In some versions of the story, the government funded these experiments. In any case, Dr. Crowe either died or was killed when his charges rebelled against him, and they ran out into the woods, where they still live today (or they are the ghosts of children killed when the orphanage burned). The Melon Heads are short and have big round heads. Sometimes the story is set in more recent times, with the addition of "someone who knew Dr. Crowe." The Melon Heads stay near the wooded area of Wisner Road, where teenagers often go to look for them on dark nights, possibly as an excuse to wrap their arms around each other in fear. There are similar legends of Melon Heads in several other states. 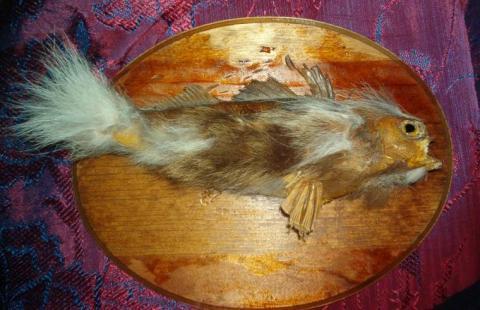 Fur-bearing trout are native to Montana and surrounding states, and in some regions of Canada. They developed fur to keep their bodies warm in the cold northern streams where they live. However, another theory exists that the fur is the result of "four jugs of hair tonic" that were accidentally spilled into the Arkansas River in the 1870s. A third explanation comes from 17th-century Scottish settlers:

One settler wrote home remarking about the abundance of "furried animals and fish" in the new land. Asked to provide more information about the furried fish, he duly sent home a specimen.

Fur-bearing trout pose no danger, and in fact have been overfished and are near extinction, although they can be seen in taxidermy shops on occasion. The same species is also sometimes called beaver trout.