We've shown you many strange and different musical instruments, but there are always more to be discovered. Here are some that you won't find in your average high school orchestra, unless you want to introduce them to the class yourself!

A hydraulophone is an organ powered by water. When a hydraulophone is not being played, it is a water fountain. The music starts when you cover one or more of the water jets, which forces the water through a calibrated pipe. Many such fountains are part of civic fountain installations. Shown here is the Teluscape, a hydraulophone at the Ontario Science Center. Hear music played on the Teluscape's water organ in this video. Image by Flickr user sousveiller.

Originally developed by African slaves in Peru, the cajón is a wooden box used as a percussion instrument. One side of the box has a sound hole, and another side is made of thinner wood (usually plywood). The cajón is slapped on the thin surface, but other sounds can be made by striking other parts of the box. You can have a cajón custom built or you can build your own. Hear a demonstration of this instrument at YouTube. Image by Wikipedia user Gluckstadt.

The wooden lur is a Viking wind instrument from the Middle Ages that was used like a trumpet to sound war calls. Made of wood and bark, it resembles a vuvuzela somewhat. You can hear the modern lur played here, and see a performance in the last minute of another video.

A friction harp is a harp played not by plucking, but by rubbing (with rosined gloves). The friction harp shown here was built by John Deagan in the 1920s. It uses hollow pipes.

Tom Kaufman built his own friction harp of solid  aluminum rods. As you see, Kaufman's instrument is played horizontally. Hear it in performance videos at his website.

The branching corrugahorn is an experimental instrument made from flexible corrugated pipe, the kind you might find in the pulmonary care ward of a hospital or in a mechanic's shop. These tubes are useful because they can be stretched and bent without breaking. As a musical instrument, they produce sound as air rushes over the internal corrugation. The branches of the instrument are different lengths to produce different tones. The branching carrugahorn was developed by Bart Hopkin; you can hear him play one here. 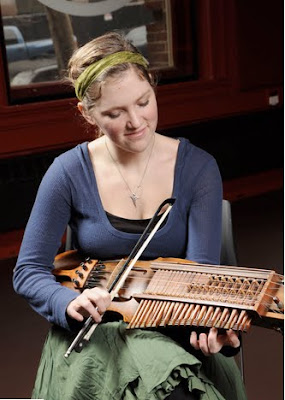 A Zeusaphone is what you get when you create music with Tesla coils, although some call this instrument a Thoremin. Both are puns made by applying mythological gods' names to earlier instruments (Sousaphone and theremin). The term  Zeusaphone is trademarked by a company that sold and rented singing Tesla coils, but no longer maintains a website. The best-known Tesla coil band is ArcAttack. They use two homemade Tesla coils to send arcs up to twelve feet long between them, and lately they even include humans wearing Faraday suits in the coils' performances. Hear a variety of tunes at the band's website.

The word pyrophone literally means "fire sound." The instrument is a series of pipes like an organ or calliope, but the sound is made by applying combustion to the pipes, usually with propane or gasoline. The pyrophone is, essentially, the dangerous opposite of the hydraulophone. Early pyrophones of the 18th and 19th centuries resembled pipe organs, although they worked like steam calliopes powered by internal combustion generators. Modern pyrophones are more likely to be homemade experiments in explosion technology, as you can see in this video performance. Nathan Stodola designed the pyrophone pictured here, which he named the Thermoacoustic Organ, or Fire Organ. The heat is provided by propane, and the pipes are cooled with liquid nitrogen. The cooling allows the pipes to be played and then replayed sooner than other pyrophones. Watch Stodola's Fire Organ in action in this video.