Like most memes, you've either seen it everywhere you go on the internet, or you are totally unaware of it -until now. Nyan Cat (also called Pop Tart Cat) is an 8-bit animation produced by the artist at LOL-COMICS who goes by the name prguitarman. The cat was published on April 2, 2011 and became an instant hit. The original image is accompanied by an endless loop of music, and in fact has a timer included. I have opted to use a video for illustration here, so you can start and stop it as you please. The first video version is closing on ten million views now, so you can imagine how many people have visited the Nyan Cat page -and the many spinoffs and tributes.

Introducing Nyan Cat with just a static image would not do, as the music is an integral part of the meme. Once you have the song in your head, then you will hear it any time you encounter the Pop Tart Cat image. The song is "Nyanyanyanyanyanyanya!", a tune made with the Vocaloid synthesizer that became popular in Japan for creating songs by fictional characters. This song is attributed to Momone Momo, a housekeeping robot with pink hair. What's important to know is that "nyan" is the sound a Japanese cat makes. The English equivalent is "meow." If you want to play the song yourself, sheet music for the piano version is available for download.

Why did Nyan Cat go viral so quickly? Because it has so many tried-and-true viral hit components in one place, yet they are combined into something new. We all know how popular cats are. Rainbows are nice and colorful. Pop Tarts are not only sweet, they are the comfort food of childhood for much of the internet generation. Pop Tarts are also hand-sized and ready to eat out of the box, and thus serves as sustenance for computer geeks, ranking somewhat below Cheetos, but consumed by the ton anyway. Retro 8-bit animations are also a bit of nostalgia for '80s kids, as they recall both classic video games and Geocities websites. Then there's that song... addicting to many and endlessly annoying to some. The tune is catchy, but for goodness sakes, it's a synthesizer singing "meow" as fast as possible into infinity. Or three minutes and 49 seconds, whichever comes first. Put all these components together in the cutest way possible, and you can't go wrong. 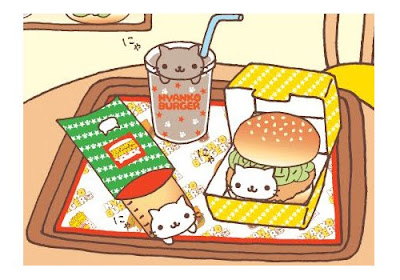 The cat+food components that make Nyan Cat what it is are tried and true. Nyan Nyan Nyancos are Japanese cat characters that are also other objects, most often food items. The San-X company has produced such characters for decades for toys, cartoons, and other products. 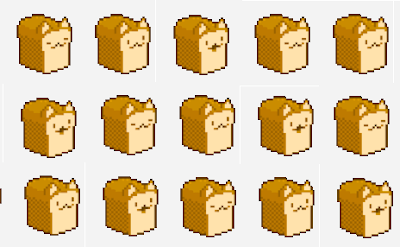 You might recall the drawing called Catbread or Kittyloaf (Nekopan in Japanese), which is etched on our minds from the 2004 YTMND loop called Cuppycake Gumdrop. 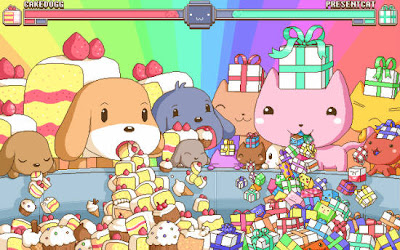 There's also the image of Cakedogg and Presentvat created by Paul Robertson in early 2009 that combines cute animals, food, and rainbows.
*

The Japanese meme of dancing anime models doing cat imitations has been around for a few years now. However, this meme was kicked up a notch when daniwellP produced just such an animation last summer (shown here) using the Nyan song. It led to a flurry of similar projects using the song (with or without the vocal) in the fall of 2010. 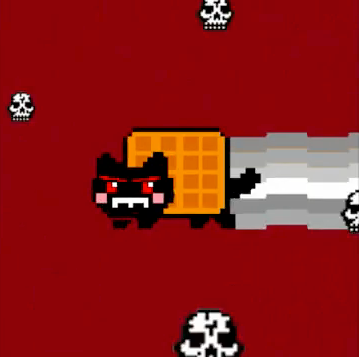 Search at YouTube for "nyan cat" and you'll get over 5,000 videos returned. Add the word "remix" and you'll still get hundreds. One that particularly stands out is the nyan song dubbed over the video for Slipknot's song "Psychosocial." The comments under the original video indicate the popularity of the overdub. The dubstep version is a strange marriage of European and Japanese music trends. Pictured is TACNAYN, Nyan Cat's evil twin. 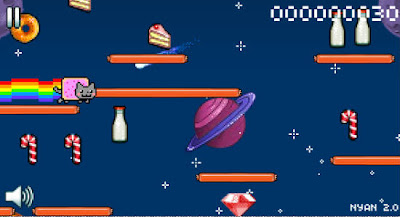 The little cat was immediately designed into video games. I found five in just a few minutes! Your cat can can jump and shoot, avoid asteroids. shoot dogs, eat candy (show here), or eat candy and avoid vegetables. Now you can order a free iPhone game as well.

Of course, the first thing you do with a viral image is put it on a t-shirt. But that was only the beginning. Hey Chickadee has Nyan Cat jewelry: earrings, necklaces, and phone charms featuring the cat with the rainbow. 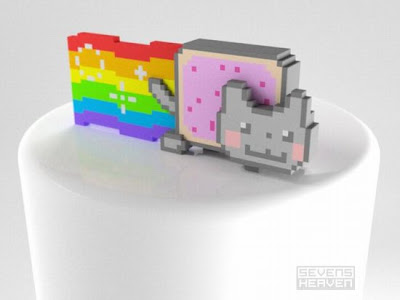 You can get a 3D statue of Nyan Cat in full color sandstone from Shapeways. 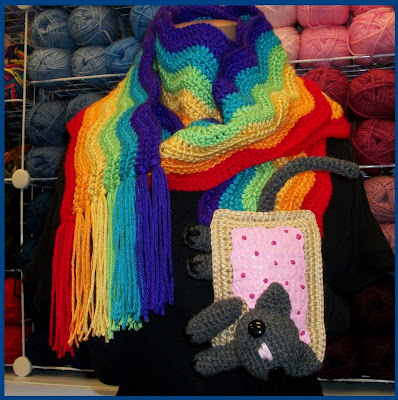 DeviantART member MasterPlanner made a rainbow scarf, complete with a detachable Pop Tart Cat! You can buy one for $75 plus shipping. 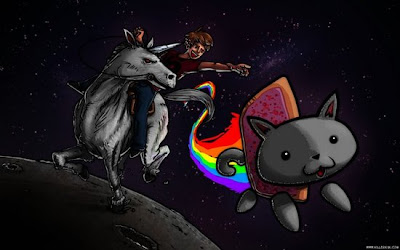 Artists all over paid tribute to the idea of Nyan Cat, like this unicorn painting from KillerKun. 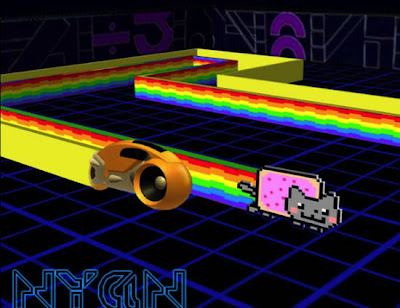 Many other renditions have been submitted to Nyan Cat's Facebook page, including a TRON version. 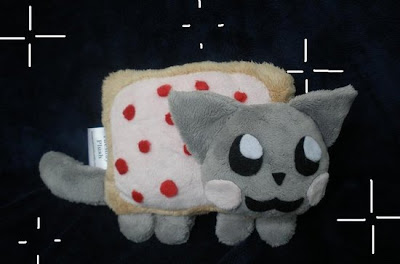 And a plush cat from DeviantART member Lonepichu. See more here. How long will the Nyan Cat meme last? Even if it dies out tomorrow, it will be remembered as a classic.

See our articles on other memes: The LOLcat of Death, You’ll Like This Alot, 6 Founding Members of the Internet Zoo, and All Hail the Fail Whale!