Earlier this week I was working on a list of science fiction-inspired furniture when I became distracted by a number of creative science fiction quilts. When I returned to the matter at hand, I found quite a few ways to take your home "out of this world."

An unnamed craftsman in New Zealand built a very special bed for his son. By day, it’s a life-size TARDIS (the time machine from Doctor Who) disguised as a police box. By night, it’s a fold-down bed! It has a working police light, pulsing LEDs, and a talking telephone. It made news when it went up for sale at Trade Me, but for one reason or another it didn't sell. 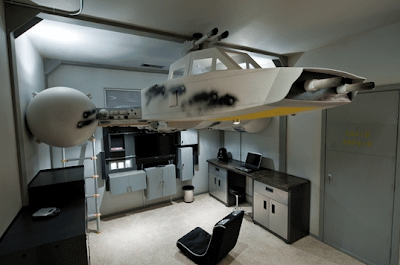 Another home-crafted project that has been lost to time is this elevated Y-wing Bed, like those of the Rebel Alliance in Star Wars. It was spotted in a real estate listing a couple of years ago that has since been deleted, so we may never know who actually built it. 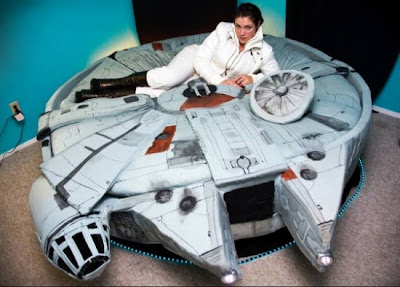 Kayla Kromer, who gained fame for the Hamburger Bed, also designed and built the Millennium Falcon Bed. It is a one-of-a-kind. Image by Heather Leah Kennedy.

Instructables member BykManDan says he is not a carpenter, yet his constructed this AT-AT Imperial Walker loft bed for his son and captured the imagination and envy of Star Wars fans worldwide. 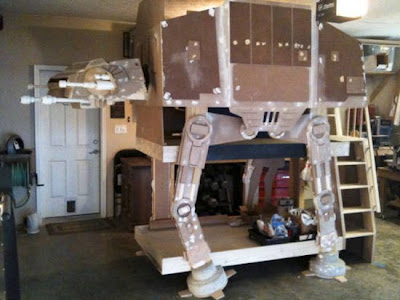 Jonathon used the same idea for his son's bunk bed, but made his AT-AT (seen in the film The Empire Strikes Back) a three-level bunk bed! You can see more details at YouTube. The child presumably has no trouble getting friends to sleep over. 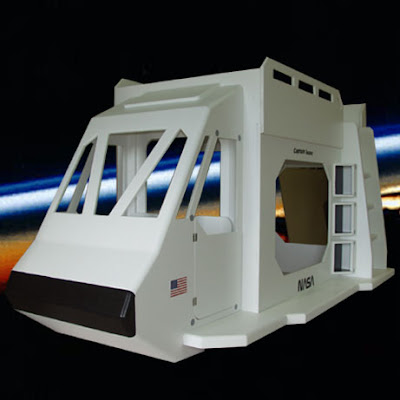 Custom space beds are wonderful, but if you don't have the skills or time, you can buy a Space Shuttle Bunk Bed. It has the NASA decals, but more closely resembles a shuttlecraft from the original Star Trek series. 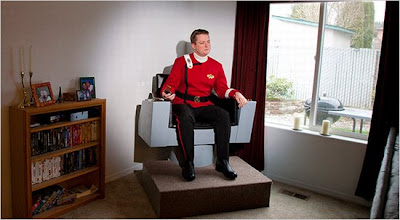 The one piece of furniture that will most make you feel like part of another world is Captain Kirk's Chair (NYT link). And even better, you'll be in total control of that world! There were once several outlets that sold replicas of the original captain's chair, including Hammacher Schlemmer, but all seem to have discontinued the item. However, if you take a good look, you'll see that the various captain's chairs used in the different Star Trek series and movies often resemble high quality but readily available office chairs modified to sit on a stable base, such as this one used by Captain Picard in several movies. Image by Susan Seubert for The New York Times. 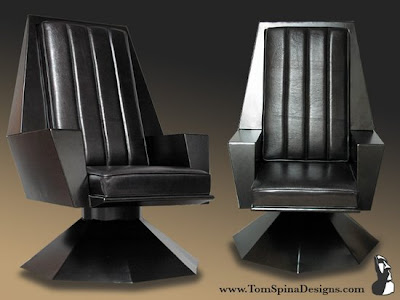 The Galactic Throne from Tom Spina Designs puts you in control, whether you're the Emperor, Darth Vader, or some other evil overlord in a spaceship. Or just a person watching them in your home theater. 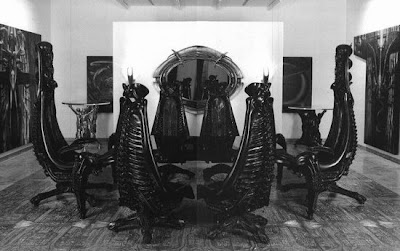 If you are looking for furniture that evokes the creepiness of the movie Alien, you are in luck, because the Swiss surrealist H.R. Giger,who designed the alien queen, also does furniture. However, you will have to contact the his agent for prices, so don't expect a bargain. 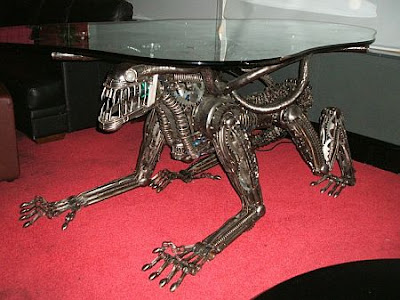 There was a company that made tables and chairs incorporating the Alien queen a few years back, but the manufacturer seem to have disappeared. 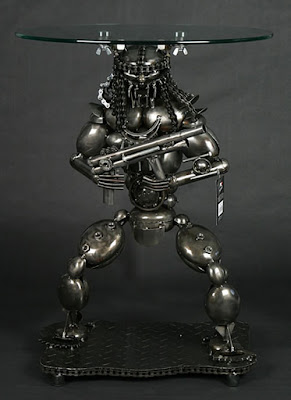 However, you can find a glass top table held up by the alien from the Predator movies. Pro Mech Racing has them in several styles. 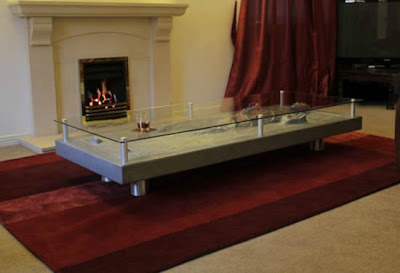 R-9 Studios brings us the Han Solo in Carbonite Coffee Table as well as the Millennium Falcon Coffee Table. Your guests probably already know your favorite films, but they'll still be impressed one way or another.

See also: Gifts for the Geek Home and 10 Ways to Game Up Your Home.