Some years ago, I wrote about 8 Wacky Fall Festivals, which didn't even scratch the surface of the roster of odd municipal celebrations around the USA. At one time, most of these fairs and festivals were scheduled for harvest season, to show off the bounty and recognize the finest produce and livestock with ribbons. Now, to maximize participation and profits, festivals are held year-round somewhere or other. Let's look at eight festivals that strive to stand out from the rest.

Go ahead and make political jokes, you can be sure the festival participants do. The Wisconsin State Cow Chip Throw sounds like an athletic event (and it is), but it's also a two-day festival coming up in September in Prairie du Sac, Wisconsin. The Cow Chip Throw itself is the headline event, in which adults, children, and teams compete separately. Cow chips are provided by the Meadow Muffin Committee. There's also the Tournament of Chips parade, a craft fair, concerts, and a 5K and 10K run. See more photos at the festival's Facebook page. 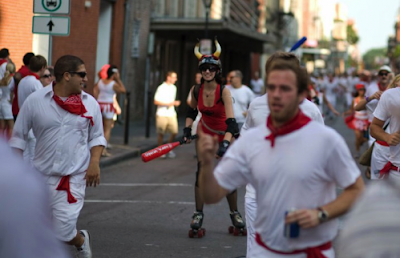 San Fermin in Nueva Orleans happens the same weekend as the famous Running of the Bulls (Encierro) in Pamplona, Spain. In New Orleans, the festival celebrates in the same way, with one big difference: the "bulls" at this festival are roller derby athletes! The Big Easy Rollergirls and guests from other roller derby teams dress as bulls and chase festival patrons through the streets of NoLa.That's just one of many events at the annual festival.

The Hatfields and the McCoys feuded across the Tug River for generations. A hundred years after the famous fights, their descendants officially ended it with a party that became an annual festival. The Hatfield & McCoy Reunion Festival is held on one day in two states and three communities: Matewan and Williamson, West Virginia and Pikeville Kentucky. The centerpiece event is a marathon run that passes through historic sites in both states where feud events occurred. The festival also features bus tours of those historic sites, as well as concerts, crafts, food, and a gun show. 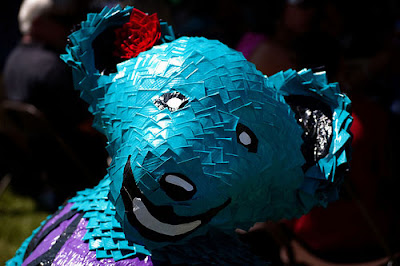 The Avon Heritage Duct Tape Festival celebrate the tape that holds the world together. Duck Brand duct tape is produced in Avon, Ohio, and the company sponsors the festival on Fathers Day weekend every year. In addition to the usual concerts, parade, and carnival rides, the festival features duct tape fashions, sculptures, and a craft contest. The parade floats are even made of duct tape! Image by Amy Preneta; see more of her pictures of the Duct Tape festival. 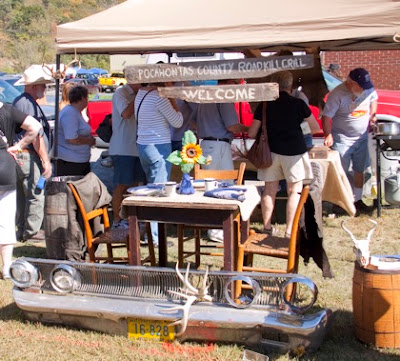 The West Virginia Roadkill Cook-Off & Autumn Harvest Festival is coming up September 24th in Marlinton, West Virginia. The festival is all in one day, yet has a full schedule of the usual festival events -plus the cook-off. The rules state:

1. All entries must have, as their main ingredient, any animal commonly found dead on the side of the road –groundhog, opossum, deer, rabbit, squirrel, snake, etc. Pigs, cows, chickens, horses, and goats are also in that category. However, it need not actually come off the side of the road (and most of the judges would prefer that it didn’t).

You can register up to the day of the event, but the entry fee is higher the longer you wait. Image from the Pocahontas Times. 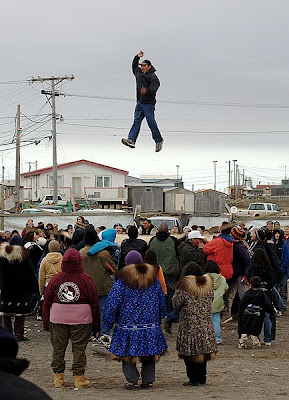 The Nalukataq is a festival to celebrate the completed whaling season, held each June in the northernmost U.S. city of all: Barrow, Alaska. In the Arctic Circle, a summer festival can go on 24 hours a day without artificial lighting! Whale meat and blubber are distributed to community members, and the festival continues with dancing, storytelling, feasting, and the traditional blanket toss. Other communities have their own, smaller Nalukataqs. Image by Wikipedia user Floyd Davidson.

We brought you the story of Mike, the Headless Chicken some time ago. Mike lives on in his namesake festival. Mike the Headless Chicken Days (now called just Mike's Festival) takes place every May in Fruita, Colorado. A lot of chicken dishes are served. There's also a car show, foot races, carnival rides, an egg toss, and eating contests featuring chicken wings and Peeps. Chick-fil-A is one of the major festival sponsors. 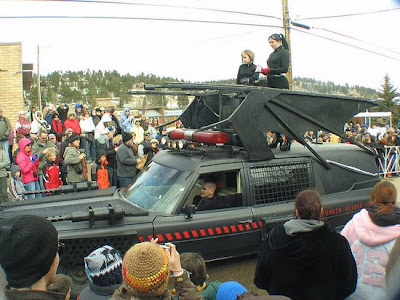 The Nederland, Colorado, Chamber of Commerce has been staging the Frozen Dead Guy Days annually for ten years. The name comes from the corpse of Bredo Morstoel, who died in 1989 and has been stored in dry ice in the area since 1993. The festival, which attracted 15,000 people this year, includes a coffin race, a parade of hearses, and more typical events as well. Nederland is looking for a buyer to take over the festival for next year. Image by Flickr user Erik Johnson.