When you see these names, you tend to say to yourself, "Does that mean what it sounds like?" In most cases, no.

You've seen the sign, if not from the highway in Wisconsin, then on the internet. And you've heard the jokes about "recreation" involving either a water pipe for marijuana, or more recently a funnel for drinking beer. But if you follow the signs, you'll find the name of the place is actually the Richard Bong State Recreation Area. Its namesake, Major Richard Ira Bong, was called the "Ace of Aces." He flew 200 combat missions in the Pacific during World War II, scoring 40 victories. Bong was presented with the Medal of Honor in 1944, on top of a number of other wartime medals. He then became a test pilot for the Air Force and flew the P-80, which malfunctioned during a flight in 1945. Major Bong bailed out of the plane, but was too close to the ground for his parachute to deploy properly, and he died on impact. The Richard Bong State Recreation Area is just one of many memorials to the flying ace. 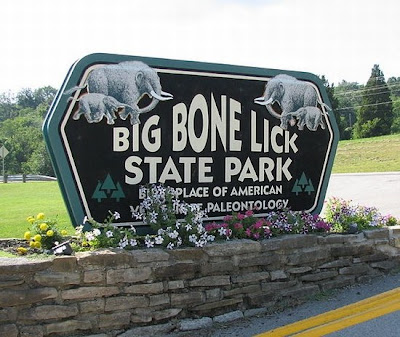 Big Bone Lick State Park in northern Kentucky is famous for its name alone. It should be more famous for its fossils, since the area was once a swamp and home to all kinds of huge prehistoric animals like mammoths, mastodons, and ground sloths. A salt spring in the area attracts animals, who would come and lick the salt that was difficult to get in the rest of their diet. Hence, it was a "lick", the same name that sticks with other such areas. Native Americans also got salt there, and passed this tip on to a French Canadian named Baron de Longueil, who explored the area in 1739. A 1744 map marks the spot as the "place where they found the elephant bones in 1739." By then, the bones found at the lick were used for all kinds of purposes. Image by Wikipedia user Mattguyver. 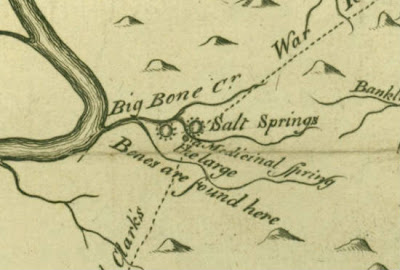 When John Filson published the a map of Kentucky in 1784, the lick was labeled, as well as Big Bone Creek and "Salt Springs and Medicinal Spring the large Bones are found here." 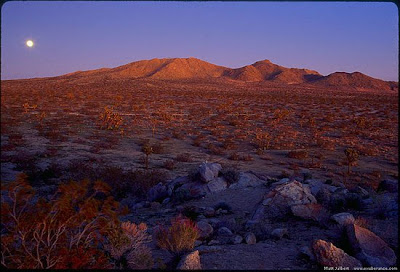 Saddleback Butte State Park near Lancaster, California might give you pause when you see the sign. When I saw this state park listing, the name struck me as a medical condition along the lines of tennis elbow, since the last time I spent all day in a saddle my butte was quite sore. It could also be a descriptive term for the appearance of a person's posterior, although not a flattering one. But this butte is pronounced beaut, which Americans should know because of the small city of Butte, Montana. It's a term for a geological formation, a hill distinguished by steep sides and a flat top, like a large rock set on a relatively flat plain. Those who've been to Saddleback Butte (or who've seen the pictures) say it looks nothing like a saddle and is hardly a butte. Someone lost to history thought up the name. Still, the park offers hiking trails up the hill to an elevation of 3,651 feet, with the reward of a spectacular view. Image by Wikipedia user Matt Jalbert. 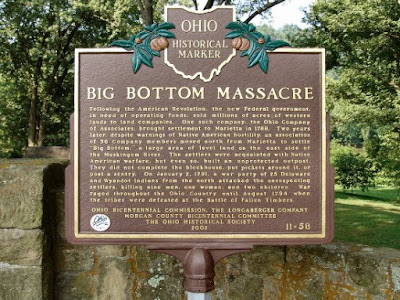 Big Bottom State Memorial Park in Stockport. Ohio is a park that commemorates the Big Bottom Massacre of 1791, a skirmish between Wyandot Indians and Ohio Company settlers that resulted in the deaths of 14 settlers. The Native Americans attacked in part because they resented the settlers encroachment upon the large fertile area on the Muskingum River. A "fertile area" on a river floodplain was commonly called "bottom land", and since the floodplain was extensive, the settlers called it Big Bottom. However, in the modern usage of the term, you don't want to pose with the sign if you are insecure about your weight. 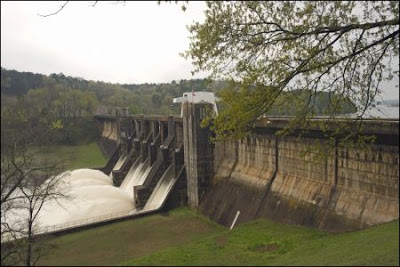 Nimrod State Wildlife Management Area is named for Nimrod Lake in Arkansas. The lake was built by the Army Corps of Engineers in 1940-42 by damming the Fourche LaFave River. They named the lake after Nimrod, the grandson of Noah, who, according to the Bible, was a mighty hunter. The area surrounding Lake Nimrod has plentiful game. Little did they know that the name Nimrod would later be a slang term for a clueless person. Bogus Bason State Park in Boise County, Idaho, is one of those names that, yes, means exactly what it sounds like. Bogus Basin was once a destination for gold miners. However, that gold was actually pyrite, or "fool's gold," which led to the name. Miners warned others away with the name, but colorful tales sprung up to explain the exact circumstances. In one, "Pan Handle Pete" and "Jughead Jake" sold the mining rights and skipped town in a hurry. Other legends have hucksters planting gold dust in the mines or broadcasting their nugget sales to fool other prospectors into buying a claim. Image by Flickr user Disodium.

Ha Ha Tonka State Park is near Camdenton, Missouri. If the name were spelled Hahatonka, we would all assume it has native origins like Minnesota or Mississippi. But the real story is even more interesting. Land speculator Robert Scott bought up a lot of Missouri wilderness in the 1890s, and wanted a better name for the area than Gunter Springs, so, inspired by the Longfellow poem "Hiawatha," he came up with Hahatonka. Scott said it was an Osage Indian name meaning "laughing waters," but there is no evidence to back up his story. Wealthy Missouri businessman Robert Snyder purchased 2,500 acres from Scott in 1904 and started building a castle, intending it as a resort area. But Snyder died in 1906, and the castle (completed in 1922) burned in 1942. When the state park was founded in 1978, the state Parks Division put spaces in the name, either to distance it from the fake Osage term or to highlight the laughing waters idea. Or both. Image by Flickr user Amazing Brian. Humbug Mountain State Park in Oregon takes its name from the mountain. It was first known as Sugarloaf Mountain until Captain William Tichenor brought a group of explorers and settlers in the 1850s. He sent out an exploratory party with instructions for climbing the mountain, but they disregarded his directions and became lost. The men named the hill Tichenor's Humbug (according to Tichenor) "to palliate their gross failure." The name was later shortened to Humbug Mountain. Image by Flickr user Mark Hillary. Frozen Head State Park in east Tennessee is named after Frozen Head Mountain. There are no corpses associated with the place name, despite stories told to children of the area. Settlers name the mountain Frozen Head because the peak is 3,324 feet high, and the top is covered with ice and snow in winter -unlike smaller hills in the area. Image by Flickr user Michael Hodge.

A couple of notable suggestions for this post should be included, even though they are not state parks. Head-smashed-in Buffalo Jump is a Canadian provincial park and a UNESCO World Heritage site. A buffalo jump is an area in which buffalo were herded over a cliff to their deaths by hunters. The only reference to the name Head-Smashed-In I found was an unsubstantiated legend about a Blackfoot who was killed by falling buffalo through his own foolishness. Then there's Beaver Dick Park in Rexburg, Idaho, which is a county park, so you can read the story of the name on your own.

See also: Part One and Part Two of this series.