A Tribute to the Grilled Cheese Sandwich

A grilled cheese sandwich is a staple food for children because it's simple, quick, and cheap to make. Kids like simple food, and an American cheese slice on white bread is as simple as it gets. Melt it by frying it in butter, and that adds a dose of love to the dish. When we get older, the pleasure that sandwich brings stays with us, even as we add adult touches like gourmet bread, a variety of cheeses, and extras like vegetables and spices. A grilled cheese is both vegetarian and kosher, but if that's not a concern it is certainly acceptable to add meat as well. Your basic American chain restaurant knows this, which is why the patty melt, a grilled cheese with a hamburger patty and sauteed onions on rye bread, became so popular. Image by redditor thebeefytaco.

Grilled cheese goes naturally with another comfort food from your childhood, tomato soup, which made at least one author relate the sandwich to artist Andy Warhol. Add another side dish or two (raw veggie sticks or potato chips), and you have an inexpensive family meal. I invested in a large electric griddle (in part) so I can made a dozen sandwiches at a time for my family of six -it requires precise timing, but it can be done. That just makes us part of a world of grilled cheese lovers -and they are all over the internet. Image by Flickr user dave milsom. Folks have been melting cheese on bread ever since cheese and bread were invented. The earliest pizzas were mainly cheese baked onto a disc of bread dough. The grilled cheese sandwich we know has been common since the 1920s, when sliced bread and American cheese became available in groceries. It was a direct descendant of both the toasted cheese sandwich (which is not fried) and the Cheese Dream, an economical open faced hot sandwich in which the main ingredient was melted cheese. The earliest publication mentioning the Cheese Dream seems to be from 1918, but the recipe became popular during the Great Depression. Image by Flickr user hmmlargeart. 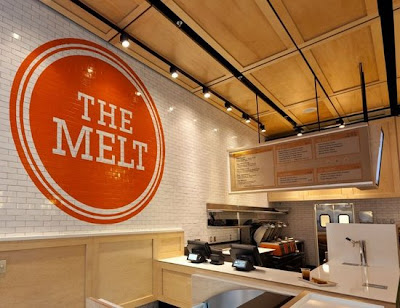 Today, this simple comfort food and all its grown-up variations are more popular than ever. So popular, in fact, that you can find restaurants that specialize in grilled cheese sandwiches. Just this week inventor Jonathan Kaplan, who developed the Flip camera, open a grilled cheese restaurant in San Francisco called The Melt, which he hopes will become a chain. It won't be the first. The American Grilled Cheese Kitchen already serves San Francisco. Chedd's Gourmet Grilled Cheese is open in Austin, Texas, and Sioux Falls, South Dakota. In Maryland, you'll find Grilled Cheese and Co. There's Cheesie's Pub and Grub in Chicago. Melt Bar and Grilled is preparing to open their third location in Ohio. The Grilled Cheese Grill has two outlets serving Portland, Oregon. And the Melthouse Bistro is planned for Milwaukee. 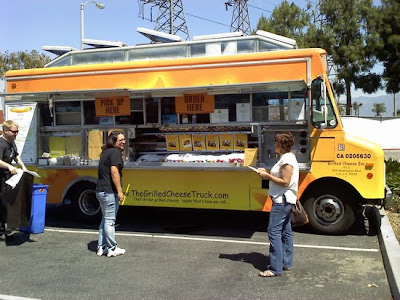 If you can't get to a restaurant for a grilled cheese, maybe one will come to you! The Grilled Cheese Truck is a sandwich truck specializing in, of course, grilled cheeses, and makes its rounds in the greater Los Angeles area. Image by Arnold Urtiaga Jr. 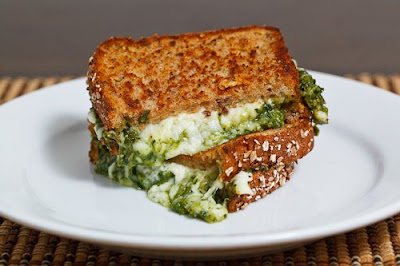 Of course, a grilled cheese sandwich is easy to make at home when you're there. It's just a matter of making a cheese sandwich, buttering the outside, and cooking it until the cheese melts. After that, there are so many variations and possibilities for added ingredients that there are entire websites devoted to grilled cheese recipes -and everything else to do with the humble but beloved grilled cheese. The Wisconsin Grilled Cheese Academy is "an institute dedicated to deliciousness," where you can find recipes for all kinds of sandwiches and a guide to Wisconsin cheeses. Many blogs sooner or later posts lists of the best or most outrageous grilled cheese recipes (examples here, here, and here), but there are also entire blogs dedicated solely to the grilled cheese. Pictured above is the Spinach Pesto Grilled Cheese Sandwich from Closet Cooking. 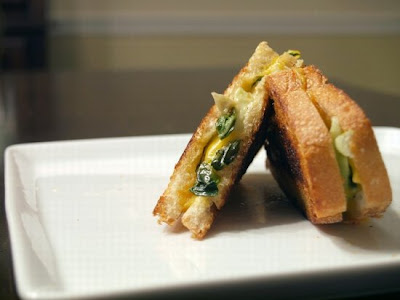 Shane Kearns at Grilled Shane blogs about everything to do with the sandwich, from recipes to news to opinions to art and music -all about grilled cheeses. The sandwich pictured is a recipe Shane posted featuring Tillamook cheddar and baby bok choy. Another blog, The Quest for the Perfect Grilled Cheese Sandwich reviews grilled cheeses at restaurants all over. 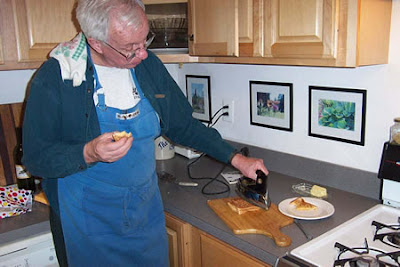 One of those blogs, Grilled Cheese Social, has plenty of recipes, but the latest post is about making grilled cheese with an iron. You might recall seeing this done in the 1993 movie Benny & Joon, which led Roy (shown here) and Laura to recreate the scene just to see if it could be done. The verdict: yes. 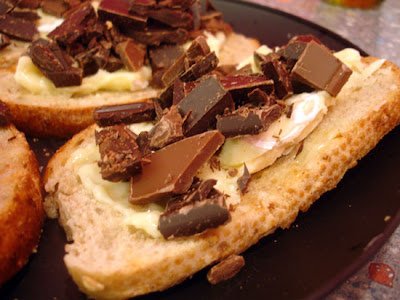 There's even a grilled cheese dessert recipe, although maybe not as sweet as, say, ice cream. The recipe for the sandwich pictured above uses brie and dark chocolate on sourdough bread. A post elsewhere proves you can talk about sex and make your audience hungry for a grilled cheese sandwich. 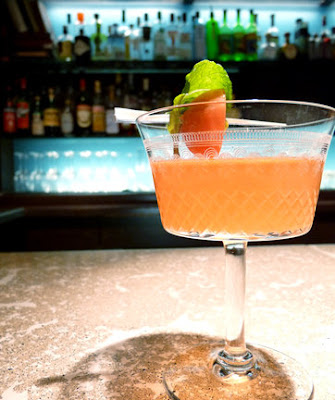 Even stranger is the grilled cheese martini, which is supposed to replicate the taste of the sandwich (and tomato soup). Australian bartender Shawn Soole at Clive's in Victoria, BC, achieves this taste by infusing rum ahead of time with a real grilled cheese sandwich. Beecher's Handmade Cheese in New York City developed their own recipe using vodka. Now it is also available in Seattle and probably other places. Image by Shawn Soole. With all this love for the grilled cheese, it only makes sense that Americans would have a competition about it. Behold The National Grilled Cheese Invitational, held in Los Angeles every year during National Grilled Cheese Month (April). A maximum of 300 competitors have 50 minutes to create sandwiches in up to four categories, separated into amateur and professional divisions. There are also non-cooking competitions at the event, such as the costume contest, poetry contest, and a "cheese-calling" contest. Image by Flickr user Alexi Kostibas.