My husband and I were watching some apocalyptic group building an underground shelter on TV, and I remarked that living underground is quite cozy and pleasant -as long as you have ready access to the outside (of course, being trapped is a nightmare). My father was a geologist, and I grew up in cave country, so I find that being underground is like having Mother Earth wrap her arms around you. There are plenty of places where you can stay temporarily to find out if you feel the same way.

Beckham Creek Cave Lodge in Parthenon, Arkansas offers lodging that doesn't interfere with the natural Ozark surroundings. There are five bedrooms and five baths, some windows, and all the usual hotel amenities -plus plenty more natural cave passages in back you can explore. The cave has been inhabited for a couple of hundred years. A cabin was built inside during the Civil War, and outlaws and bootleggers used it for a hideout. John Hay, the founder of Celestial Seasonings tea company, bought it and began remodeling the save to use as a Cold War bomb shelter. Successive owners have all added more modern features, but you're still staying in a cave. Beckham Creek Cave Lodge is for sale, if you want to get into the cave hotel business. 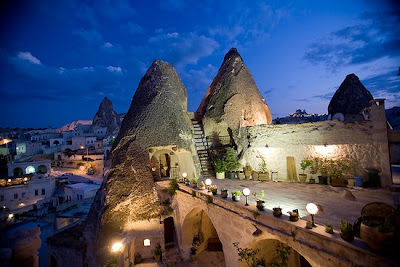 The Cappadocia region of Turkey is renowned for its many caves. Volcanic activity led to the creation of caves and fairy chimneys, which were made into home since ancient times. The Kelebek Special Cave Hotel in Goreme, Turkey was once a family home. Now it has guest rooms in both caves and in the fairy chimneys. 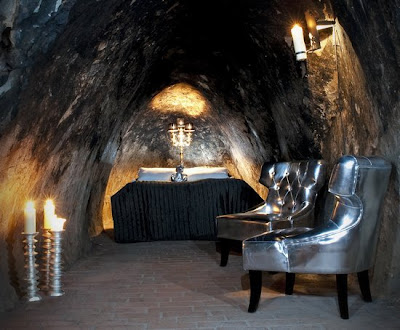 The Sala Silver Mine in Sala, Sweden was a working mine off and on for 400 years! It is now owned by the town, and is mostly a museum. However, there is one suite for rent 155 meters down. The mine can also be rented for weddings, meetings, and other events. See more pictures of the Sala Mine. Image by Mattias Johansson/Pappilabild.

The White Cliffs Underground Motel in New South Wales, Australia is dug out of the rock in Australia's opal mining region. It offers a cool shelter from the outback sun. In fact, many of the homes in the town of White Cliffs are also underground! Image by Flickr user Richard Gifford. 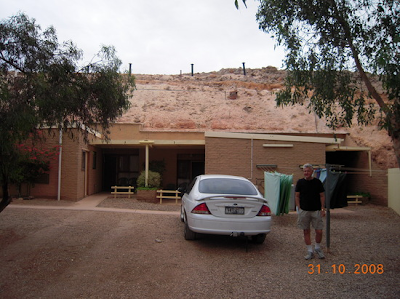 Another dugout inn, The Underground Motel in Coober Pedy, Australia is also in the opal mining region, and was dug out of a sandstone hill. Six standard rooms and two suites are available, all with windows in the front and outdoor verandas. Photo from TravelPod: Off to Coober Pedy 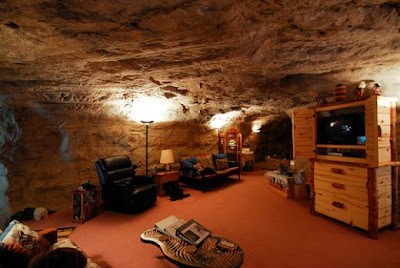 Kokopelli's Cave in Farmington, New Mexico is a man-made cave near the Four Corners area, the only place in the U.S. where four state borders meet. The one-bedroom home includes a kitchen, hot tub, carpet, and more floor space than many houses. 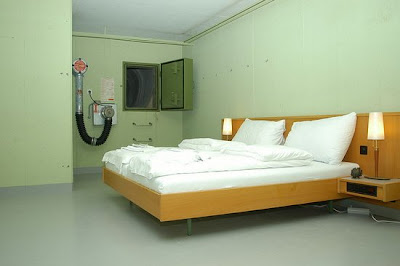 The Null Stern Hotel in Teufen, Switzerland was an experimental art installation in which a full-service luxury hotel was made out of a nuclear bunker in 2009. After a year, it was turned into a museum, but the founders are looking for other locations to expand the concept. Image by Wikipedia user Künstlersohn. 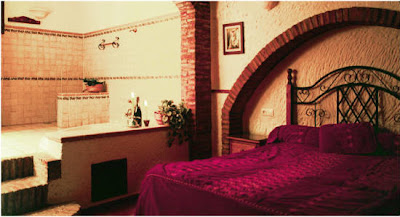 The cave rooms of Cuevas Pedro Antonio de Alarcón in Guadix, Spain were once individual homes. The owner bought the series of caves to keep them from deteriorating. The 23 cave accommodations include suites with multiple bedrooms, one especially adapted for the disabled, bridal suites, a special "private" suite for parties, and they all promise an authentic experience of Guadix. 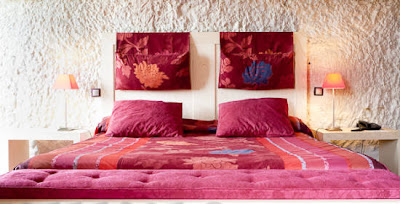 "France's leading luxury Troglodytic hotel," Les Hautes Roches in Loire, France looks like a lovely manor house. It has 14 rooms, two in the main building, and 12 carved from the rock of the hill on the banks of the Loire River. The caves were once the dormitories of the Marmoutier Abbey and were renovated into an inn in 1991.