Depicting a person we all recognize takes talent when you use a pencil or paintbrush. Doing it with LEGO blocks takes a particular kind of talent because of the restrictions inherent in the medium. I am no art critic, just an art fan. Neither am I a LEGO expert -in fact, I have never owned a set of LEGO bricks! But I can appreciate the talent that goes into recreating real life in bricks. It's like working with pixels, except your pixels are limited to specific sizes, shapes, and colors. And these artists do wonderful things with them!

The 20th anniversary of the death of Freddie Mercury inspired Iain Heath (Ochre Jelly) to build a likeness of the Queen singer in LEGO. He unveiled it in a post about Mercury's life and accomplishments. This figure inspired this post, because I marveled at how a LEGO artist could take a set of preformed blocks and choose just the right ones to set in the right places in order to recreate a human figure we all recognize, apart and separate from the many human figures we see every day. Image by Flickr user Iain Heath. 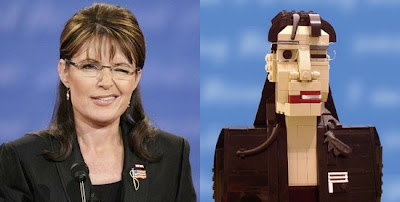 Heath is no beginner in recreating real people in LEGO form. In 2008, he sculpted then-vice presidential candidate Sarah Palin doing her signature wink at the camera. 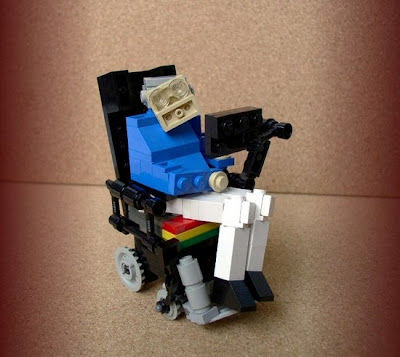 But Ochre Jelly's best known LEGO sculpture is one that internet surfers recognize, even if they don't know who did it (I didn't, until I researched this post). Heath sculpted Stephen Hawking in LEGO in 2007, then shared the building instructions. This creation amazed us because of the minimalist method that still conveyed exactly who the figure is. See more pictures here.

Mythbusters and Other Science Figures

There have been a few LEGO minifigures that are based on real people (ignore the fact that Santa Claus is included in the list). Most were only available for sale for a short time, or were never sold to the public, instead appearing in films or video games. However, LEGO artists are pretty good at altering existing minifigs to look like someone in particular. Maia Weinstock enshrined your favorite internet scientists, science bloggers, and other science personalities in Lego! The project is called Scitweeps, as each person is identified by their Twitter feed. How many do you recognize? See the entire collection in her Flickr set. Shown here is Weinstock's version of Mythbuster's Adam Savage and Jamie Hyneman. Get a closer view of the Mythbusters minifigs in another picture. Image by Flickr user pixbymaia.

Mark Twain and Other Historical Figures 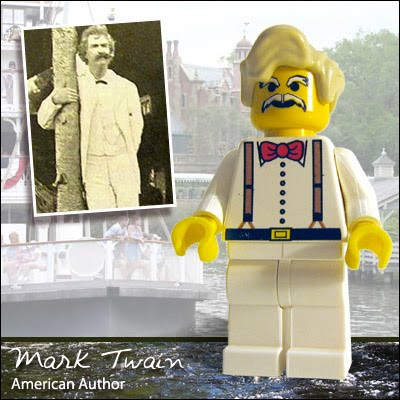 Fine Clonier, a LEGO customization site, held a competition in 2007 in which artists customized minifigs into historical figures. This Mark Twain was the overall winner. See the other entries at Flickr.

Miracle on the Hudson 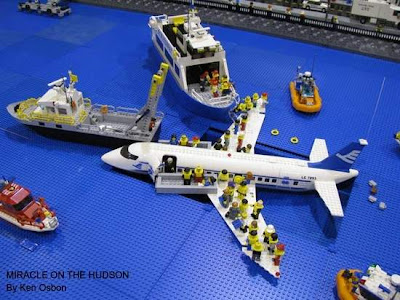 Real-life people and events can be recreated without customizing any minifigs at all when the perspective is different. Anyone who was around three years ago when Captain Chesley Sullenberger landed US Airways Flight 1549 in the Hudson River will recognize this scene from the news coverage. Ken Osbon of Goshen Township, Ohio created this Lego version of the incident for BrickExpo 2010. The details are all there, from the debris in the water to the passengers on the wings.

Minifigures were used in this recreation of the cover of the 2005 album Push Barman to Open Old Wounds by Belle and Sebastian. Once again, the details around the minifigs make the LEGO version work. You can see an entire gallery of iconic album covers redone in LEGO at The Toy Zone. It only happened recently, but we've all seen the pictures. Doc Pop spent seven hours creating this LEGO diorama featuring Lt. Pike pepper-spraying a line of protesting UC Davis students. It was installed in one the many abandoned newspaper bins in San Francisco. Someone removed it less than four hours later, but the photographs remain. This scene reminds me of another campus protest incident 40 years ago that was also recreated in LEGO. Image by Flickr user docpop. 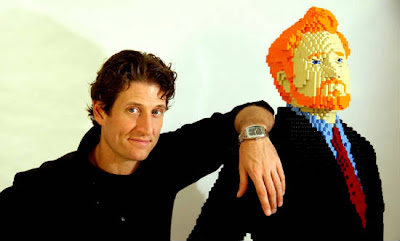 Full-size human LEGO sculptures are another example of working in pixels, in which the shape of the bricks matters less than the placement, yet the overall effect is the same as working in pixels -just on a different scale. Brick artist Nathan Sawaya makes full-size sculptures as well as smaller artworks and mosaics. Here he poses with his full-size Conan O'Brien sculpture containing thousands of LEGO bricks. Sawaya has 1.5 million more bricks in his New York studio! Last summer, Sawaya made another sculpture of Conan in his superhero mode.

See more of Sawaya's works in his gallery. Henry Lim and Sean Kenney are other brick artists who build large-scale LEGO sculptures and mosaics that you should check out.

Of course, there are hundreds, if not thousands, of talented LEGO artists who recreate fictional characters, movie scenes, architecture, classical artworks, and more. See some of them at Brothers Brick, The Living Brick, and MOCpages, as well as other LEGO art sites.