The first episode of Doctor Who aired 50 years ago today! Celebrate with this round-up of homemade TARDISes from the archives.

TARDIS is an acronym for Time And Relative Dimension In Space. In the Doctor Who universe, they are vehicles for Time Lords to travel through time and space. Besides its function, the most striking feature of a TARDIS is the fact that it is bigger on the inside, because the door is "a dimensional gateway to a micro-universe." Most such vehicles change their appearance to blend in with the location and era to which they travel, but the somewhat obsolete model the Doctor uses is stuck in the form of a British police call box. Therefore it has become an icon for Doctor Who fans. And there are many Doctor Who fans who want a TARDIS that works, even if they have to make their own.

The blogger at Time Machine Yeah moved into a house with two roommates and needed a refrigerator that's bigger on the inside (and who doesn't?), so she converted her unit into a TARDIS. Watch the transformation process in a time-lapse video. Oh, and it's perfectly functional -as a refrigerator. 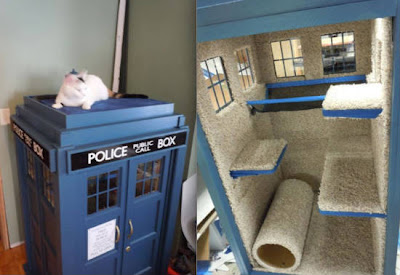 Astromark first built a 1/6 scale TARDIS cat toy as a gift, then decided to build a 1/2 scale TARDIS for his own cat Kaylee. The result was the most elaborate toy/shelter a cat could ever ask for. Kaylee finds it nice to sit on top of, or inside where there are plenty of climbing, sleeping, and scratching surfaces. This one is very functional -to a cat. 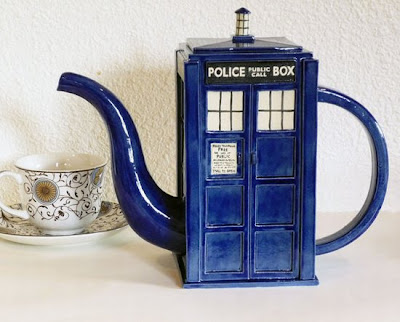 Rebekka Ferbrache makes these beautiful ceramic TARDIS teapots to sell in her Etsy shop. They are each made to order, which takes about ten weeks of lead time. As you can see in this video, it functions perfectly well -as a teapot. 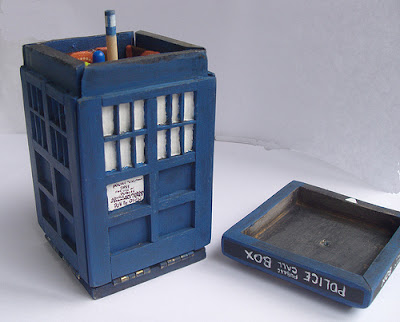 Craftster member Joesuplicki made a small TARDIS to hold a variety of sewing tools and supplies for whatever disaster may befall you on your travels. After the top comes off, each side folds down to reveal what you've stashed away. The center pole can hold spools of thread as well. This is really functional -as a sewing kit. 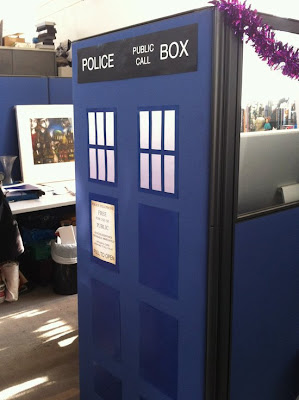 DeviantART member deezoid thought his office cubicle needed more room. There wasn't much he could do about it, but a makeover turned it into a TARDIS and it certainly feels bigger inside! And it's perfectly functional -as an office cubicle. 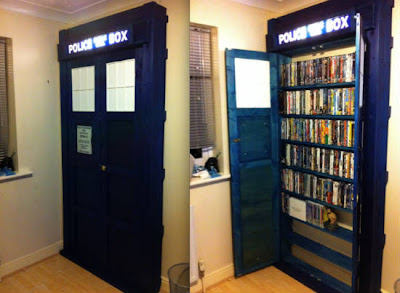 Hannah's father built this TARDIS bookcase to hold her collection of DVDs, because she needed plenty of room on the inside. The lighted sign on top really grabs your attention. You can get some details on the build in this video. Oh, you can bet it's functional -as a bookcase. 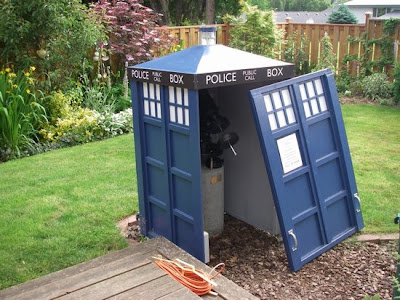 Duncan Kitchin is a stargazer and a Doctor Who fan. He also has a rather large telescope that’s too big to easily take inside and back out often. So he built a TARDIS as a telescope shed! One side comes off, and the rest rolls away on wheels. When Kitchin is through with the telescope, he just covers it up again and the instrument is protected from the weather. See more pictures at Astro Imaging Blog. Yes, it's functional -as a telescope cover. 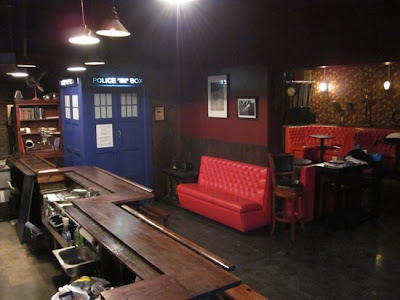 The Way Station is a Doctor Who-themed bar in Brooklyn that has a TARDIS sitting right in the middle of the room. This is handy because it's the restroom! Patrons will tell you it is wonderfully functional -as a toilet. Normal Jean and her husband scalpod put a TARDIS right in their living room, insuring that it will always be bigger on the inside -which is the outside, meaning the great outdoors! This project was part of a TARDIS competition a few years ago. You can see more pictures of the building process in her Flickr set. This TARDIS is quite functional -as a door.

MAME is a piece of software you run on a PC that lets you run and play thousands of old arcade games. It works by emulating the hardware necessary to run the original game ROM files. So the games aren't a simulation of the originals. They ARE the originals. The aim of the MAME development team is to ensure the old games aren't lost as the hardware becomes more rare. Note that their purpose is to preserve these items of electronic history as exactly as possible. They aren't trying to make every game playable on your regular home PC. The fact that most games are playable is just a nice side effect for people who love the classics.

The resulting product is a complete game arcade inside a TARDIS. Yes, it's functional -as a game arcade.

A man in New Zealand built a very special bed for his son. By day, it’s a life-size TARDIS disguised as a police box. By night, it’s a fold-down bed! It has a working police light, pulsing LEDs, and a talking telephone. The bed was put up for auction in 2010, but unfortunately did not sell. However, you can still get some build details at the auction site. It's is very functional -as a bed.

Note: The plural of TARDIS is a subject of some argument. I borrowed the title usage from the site The Who Universe.