A dalek is a science fiction character found in the British TV series Doctor Who. They are evil alien mutants who travel inside cyborg shells and try to exterminate other beings. They are also funny-looking, and have inspired many cooks to recreate their appearance in tasty treats!

Navaboo made daleks from Oreo cookies, cake, pretzels, almonds, candy, and frosting for a Doctor Who Series 6 kick-off party. The directions are posted at Flickr if you'd like to try these yourself! Image by Flickr user Navaboo. 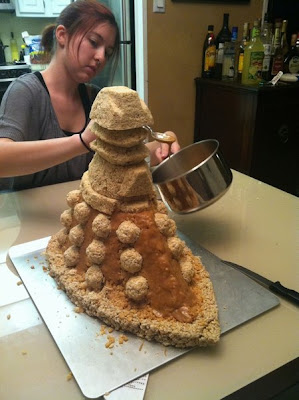 Shawn Musho and Laura made a dalek out of Rice Krispys for a friend's Doctor Who-themed birthday party. The project took

...six boxes of rice krispies, a giant tub of peanut Butter, six bags of mini marshmellows, and tons of butter and corn syrup.

Of course, some of that got eaten along the way, but the end product was a great big tasty dalek! See pictures of the process in this album. These blue dalek cakes were made by Kyle, Raven, and Evan for Raven's birthday. Image by Flickr user hep svadja. Alicia made cupcakes decorated with black and white daleks to enjoy while watching the Doctor Who season finale in 2008. Yes, the ball bearings are edible! Image by Flickr user ginnerobot. 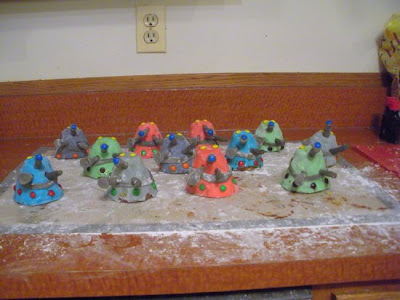 Corinne was inspired to not only try some dalek cupcakes, but also to post pictures and instructions on her blog sparecake. The one on the right aiming way up was named Derp. 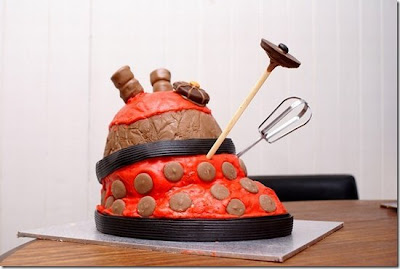 Sarah Slaven made a dalek cake with a surprise inside. The top is a dome of chocolate, laid over two layers of cake decorated with cookies, candy, and marshmallows. 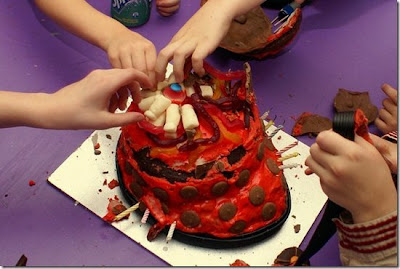 During a Doctor Who-themed birthday party, Eli used a Sonic Screwdriver to smash the dome and reveal the tentacled dalek monster that controls the robotic dalek shell! The process of building this cake is laid out in pictures and instructions. 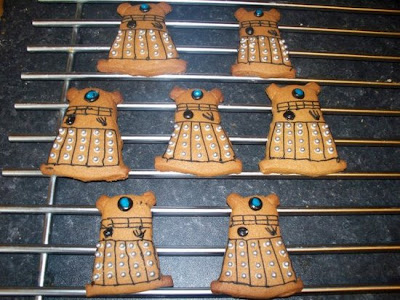 Nell at Snacks-acoricofallapatorius hand-cut these gingerbread daleks. And she used edible ball bearings. That takes artistry dedication. The rest of us can just use dalek cookie cutters. 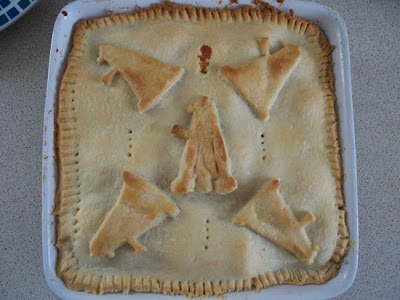 Once you have the cookie cutters, you can make anything in the shape of a dalek! This photo is from dazmania83, but there is no other information, like what kind of pie it is -but it sure looks good! Not only dalek cupcakes, but a TARDIS cake to accompany them! These were the centerpiece treats at Gary's birthday party in 2011. Image by Flickr user marence1. 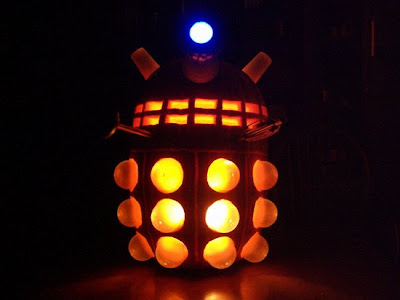 This stretches the meaning of "edible" just a bit, but a pumpkin is a fruit, after all! Julian carved this dalek-o-lantern in 2010. See more pictures in this photo album.