9 Pre-Lenten Treats from Around the World

Today is Shrove Tuesday, the last day before Lent in many Christian traditions. Eastern Orthodox Christians begin Great Lent on a slightly different calendar. The day is also called Mardi Gras, Carnival, Pancake Tuesday, and many other names in various languages. What these days have in common is a tradition of a final feast of foods that will be forbidden for the period of Lent which leads up to Easter. Many cultures have developed traditional recipes to use up the household supplies commonly given up for Lent, in order to reduce temptation and waste. That means sugar, eggs, oil, meat, and other calorie-laden staples.

In Sweden, semla is the traditional treat for fettisdag. Semla is a sweet bun laced with cardamon and filled with almond paste and cream, an unbelievably sweet treat eaten with plenty of coffee to wash it down. In Sweden, bakeries compete fiercely to offer the best semla of the season. The semla of the Middle Ages was a rather plain bun eaten up before Lent, but with the Protestant Reformation, Swedes began eating it during Lent as part of the protest. When the fillings were added, it became so rich that it gradually moved back to being a pre-Lenten treat. Similar sweets are offered in other Scandinavian countries by other names, with slight variations in the recipes. In Finland, buns are sometimes filled with raspberry jam. In Denmark, the buns have whipped cream and jam inside. Other versions include raisins or orange peel. Photograph by Flickr user Johan Dalenius. Malasada is traditional in both Portugal and Hawaii. The recipe was imported when laborers from Madeira and the Azores worked in sugar plantations in Hawaii. The Shrove Tuesday treat consists of deep-fried balls of yeast dough that are sprinkled with sugar and resemble fluffy doughnuts without the hole. Some recipes call for passionfruit filling. They are best eaten hot from the fryer, with a cup of cocoa. Photograph by Flickr user joyosity. In Poland and in communities with Polish roots, Shrove Tuesday is known as Ostatki. The most common traditional treat is p?czki, a deep-fried jelly doughnut dusted with powdered sugar. They are different from your everyday doughnut in that they contain more eggs, and some recipes call for a little bit of alcohol in the dough, which keeps the oil from penetrating too deeply. P?czki is traditionally eaten on Fat Thursday in Poland, almost a week before Ash Wednesday, but in the U.S., p?czki is common through the Carnival season up through the day of Ostatki. Photograph by Flickr user Tomek Augustyn. Iceland celebrates Sprengidagur, which translates to Bursting Day. It's a day in which you eat to the point of bursting! The traditional feast is salted lamb and peas, or split-pea soup. You can try the recipe if you are comfortable with a mechanical translation. Note that it calls for salt salt. Photograph by Flickr user Ralf Smallkaa. Romanian pre-Lenten feasts are held on Cheesefare Sunday in the Orthodox tradition. This is the last day dairy products are eaten before Lent. Treats include gogosi, which is another deep-fried doughnut, and papanasi, which is a cottage cheese dumpling. The cheese is mixed with sugar and other ingredients and fried, then served with sour cream and jam. Photograph by Flickr user Ana ADI.

Even communities that do not observe Lent will enjoy a traditional Pancake Day, for fundraisers or just for the fun of it. It's a good time to try out some new pancake recipes or techniques. Photograph by Flickr user Rachel. 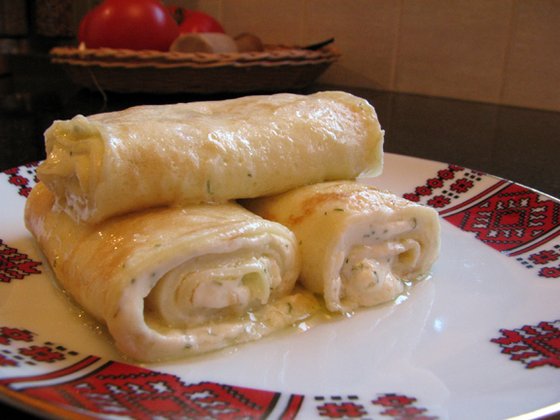 In the Ukraine, Cheesefare Sunday feasts feature nalysnyky (crepes) that are rolled up with the cottage cheese that must be finished before Great Lent. This type of nalysnyky is eaten as a main course, as observant Orthodox adherents have given up meat already by Cheesefare Sunday. Nalysnyky can also be filled with fruit or orange sauce as a dessert. See how nalysnyky is made at Claudia's Cookbook. In Alabama, Louisiana, and other places that celebrate Mardi Gras, the King Cake is the traditional sweet. The King Cake started as a Christmas treat in Europe, and was named for the visit of the Magi. A dried bean was baked into the cake, and the person who was served the part containing the bean became the "king" of the celebration. As Christmas stretched to Twelfth Night, the cake continued to be served, and that tradition stretched into Carnival season. In the U.S., the bean began to be used on Twelfth Night to designate who would be the Queen of the Ball for Mardi Gras. Over time, the bean (or sometimes a coin) was replaced by a small ceramic or plastic baby. In the last 50 years, a tradition developed in which neighborhood parties were held every weekend from Twelfth Night to Mardi Gras, and whoever got the baby would bake the King Cake for the next party. Photograph by Flickr user Logan Brown.

This is just a short overview of some pre-Lenten treats from different places. The list of traditional foods goes on and on. Which are your favorite treats?