Fish normally are found in three places: in the wild water, in aquariums, and on our dinner plates. But fish can move from one of these worlds to another. Fish imported to eat or to keep as pets sometimes get into the local ecosystem, which is not their native habitat. The population controls of the species' native environment might not be present in the new place, or they may take over another species' spot in the food chain. That's pretty much the story of the snakehead fish.

The Northern Snakehead (Channa argus) is a fish native to China and Korea that will eat all the fish in a pond, then start on the other animals living there. In Asia they are grown for food, and they are kept in rice paddies in order to kill pests that may damage crops. Photograph by Flickr user Brian Gratwicke. 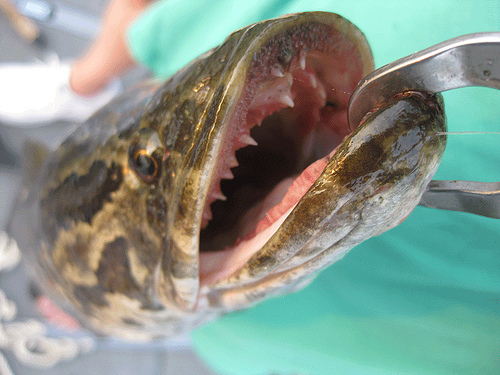 The snakehead is traditionally considered to have medicinal value. In 2000, a man in Crofton, Maryland ordered two snakeheads from a fish market in New York to make soup for his ailing sister. However, the woman recovered, so he put the live fish in his aquarium. When they grew too large for the aquarium, he let them go in a nearby pond. The snakeheads thrived and reproduced. Two years later, the infestation was discovered and officials made the decision to kill all the fish in the pond with the poison rotenone to eradicate the invasive species. The dead fish included six adult snakeheads and about a thousand juveniles. Photograph from the Maryland Department of Natural Resources.

But here's the kicker -snakeheads can walk.

They can travel from one water source to another by maneuvering on their fins, and young fish can survive days without water, as they have tiny sacs above their gills that can draw oxygen from air! In 2004, snakeheads were found in the Potomac River. You can't just poison all the fish in a river like they did at the Crofton pond. 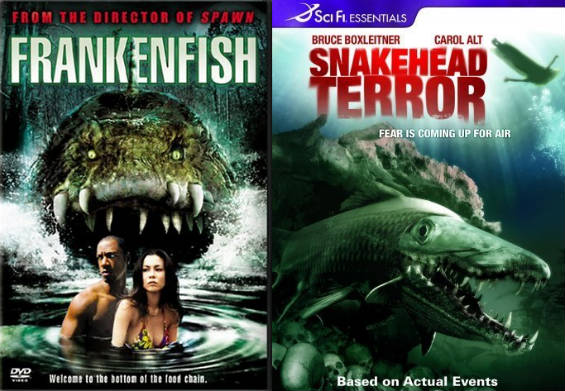 The Crofton incident inspired two movies. One was the 2004 film Frankenfish, about genetically-engineered man-eating snakeheads that escaped and bred in the bayou country. It was released on home video about three weeks after debuting in theaters. The other, the SyFy Channel movie Snakehead Terror, also from 2004, is about snakeheads that grow to monster size after growth hormones are dumped in a Maryland lake. The fish crawl out onto the land searching for food. And, of course, that means people! 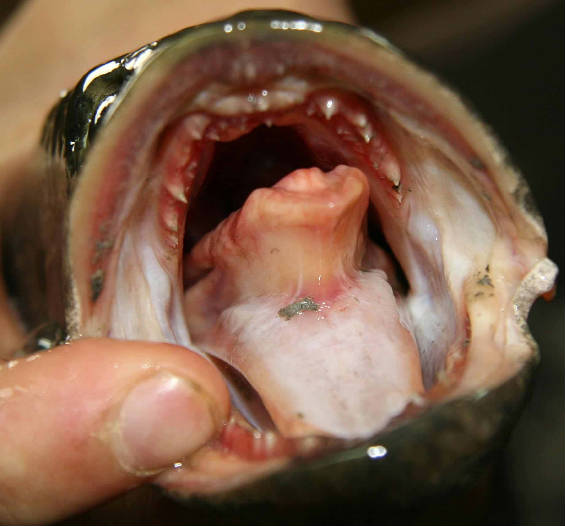 Snakehead importation was banned in 2002, and some authorities believe that people who owned live snakeheads at the time may have dumped them into public waters to get rid of the evidence. Northern Snakeheads were spotted in Piney Creek in Lee County, Arkansas in 2009. The source may have been a nearby fishery that once raised snakeheads for consumers, but "disposed" of them in 2001. Years later, a farmer found one wiggling across the road, and more in a ditch on his farm. The state Game and Fish Commission went into attack mode after the sightings, and poisoned Piney Creek and its tributaries, all 400 miles, with rotenone, which kills all fish. Native fish were restocked after the kill. Photograph from the Arkansas Game and Fish Commission.

The Giant Snakehead (Channa micropeltes) is native to Southeast Asia, notably Malaysia and Indonesia. They can grow to over a meter in length! A 24-inch Giant Snakehead was caught in Wisconsin in 2003, but was thrown back before it was identified from a photograph. It was not seen again, probably because the tropical fish couldn't deal with the climate, but environmentalists are concerned that they could flourish in warmer industrial runoff sites. A 2008 report of a Giant Snakehead sighting in England turned out to be a hoax. Photograph by Flickr user Mohd Fahmi Mohd Azmi. 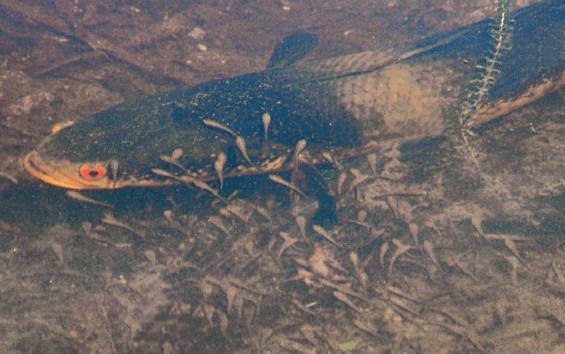 The Great Snakehead, Cobra Snakehead, or Bullseye Snakehead (Channa marulius) is indigenous to India and all of South Asia. Specimens were discovered in Florida waters in 2000, and are now part of the permanent ecosystem. Fishing for snakeheads is encouraged and embraced, as they get pretty big. Throwing them back is illegal. 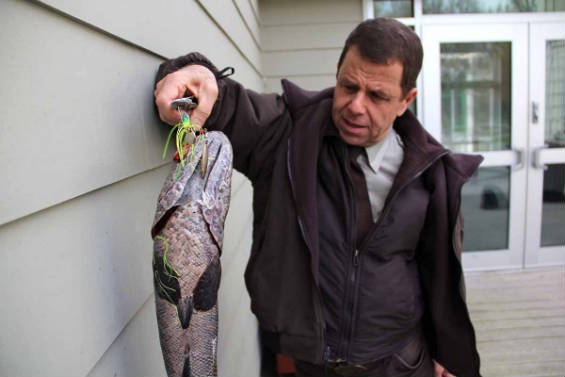 Snakeheads have been found in Massachusetts, Maine, and Rhode Island, but those are believed to be isolated incidents of abandoned aquarium fish. Officials hope that New England waters are too cold for their proliferation. But a little further south, they thrive. Snakeheads were found in New York in 2005. Just a couple of weeks ago, a Northern Snakehead was found in the John Heinz National Wildlife Refuge in Tinicum, Pennsylvania. It was the second sighting in the refuge, as one was reported found last year. Photograph by Emma Lee for NewsWorks.