8 Wild and Wonderful Stone Giants Around the World

A few years ago, I wrote about some interesting rock formations in the post Nature's Stone Giants. Then there was a followup: Rocks that Rock: 8 Stone Giant Sites. As usual, commenters had more suggestions for wonderful rock formations worth checking out. From a long list of rocks, here are eight that lie outside the United States.

Dore Holm is a small rock island off the coast of Eshaness in the Shetland Islands of Scotland. The natural arch makes the rock look like a horse that is drinking from the water. It is thought that the name "Dore" is derived from "door," and "holm" is a word of Scandinavian origin that means island. The 36-meter-tall island does appear to have a door right through it. Peña de Bernal in San Sebastián Bernal, Mexico is a rock almost 2,000 feet tall and provides a backdrop for the historic town. It is the third tallest rock in the world, and the second most massive (after Uluru). The volcanic rock is estimated to be about 100 million years old. Peña de Bernal is popular with hikers and climbers, but is only accessible to about half its height. The abundance of crystals (amethyst, quartz, obsidian) gave rise to many legends about Peña de Bernal's magical qualities. Photograph by Flickr user Kelly Hart.

The Sleeping Giant in Thunder Bay, Ontario is a formation of rocks on Lake Superior that looks like a reclining man when viewed from the city. It is the focal point of Sleeping Giant Provincial Park, which offers all kinds of nature-based tourist activities. Photograph by Flickr user Peter Vanderheyden. The range of mountains called the Bungle Bungle in Purnululu National Park in Western Australia was once a river bed of sediment. Around 350 million years ago, it was lifted up in one big block, but weathering has formed it into a series of rounded mounds with stripes showing the original sedimentary layers. The name is actually Bungle Bungle, given to the formation in 1930 after a nearby station named Bungle Bungle, but many people call them the Bungles. Photograph by Flickr user David Busch. 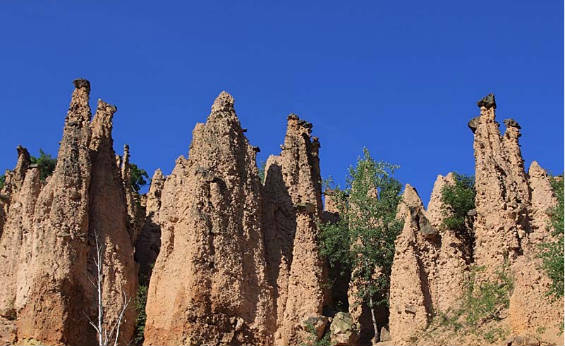 ?avolja Varoš is Serbian for "Devil's Town." The group of stone pillars near Kursumlija, Serbia, was formed by erosion. The towers rise up to 15 meters tall, some with heavy capstones on top. The local legend is that the pillars were once a wedding party that was suddenly turned into stone by the devil himself. The area also has two acid mineral springs, and is protected as a natural monument. Ha Long Bay is an inlet in the Gulf of Tonkin in Vietnam. There are some 1,600 small islands made of limestone pillars that present a spectacular sight. Most are uninhabited because they are so steep. Erosion by seawater has cut a distinctive notch into the formations, in some places so deep as to form caves and grottoes. Ha Long Bay is a UNESCO World Heritage site. Photograph by Flickr user Rory OBrien. Milos Island, Greece is the location of beautiful volcanic cliffs. The two volcanoes that created the island have been extinct for only 90,000 years. Milos lies at the edge of the Eurasiatic tectonic plate, which is on a collision course with the African plate. Milos has some tall volcanic plugs, formed when magma solidified in a volcanic pipe, then the mountain around it wore away. The east and southeast areas of the island also have geysers that release hot sulfuric gasses. Photograph by Flickr user Jacopo Della Porta. Uluru is a miles-wide monolith of sandstone in the desert of central Australia, 200 kilometers from Alice Springs. As huge as it appears, more of the rock lies underground than is visible above, making it the largest known single rock in the world. Archeological evidence shows that people have been present there for thousands of years. The rock is sacred to the Anangu Aboriginal people, who own it. One of the most spectacular features of Uluru is how the rock appears bright red in the sunrise and sunset. Legend has it that anyone taking rocks from Uluru will be cursed, and those who have taken souvenirs sometimes go to great lengths to return them after experiencing some misfortune. William Gosse was the first white man to explore Uluru in 1873, and he named it Ayers Rock, although the A?angu had always called it Uluru. The area was set aside as an Aboriginal reservation in the early 20th century. In 1985, ownership of the rock was handed back to the A?angu on condition that they would lease it to the National Park Service for 99 years. In 1993, it was officially renamed "Ayers Rock/Uluru" and in 2002 that was changed to "Uluru/Ayers Rock." The area around Uluru and the former Mt. Olga is now called Uluru-Kata Tjuta National Park, and is a UNESCO World Heritage site. There is a continuing effort to manage tourist activities in order to balance access to the site with the damage tourism does to the ecosystem. Photograph by Flickr user ernieski.