When I posted 7 Fairy Tale Castles, there were quite a few castles that didn't make the cut. Some were just too frightening to think of as part of a children's princess-type story, but the legends behind them make great tales for telling around a campfire on a dark and spooky night.

Dalhousie Castle was built in the 13th century on the banks of the Esk River in Scotland, not far from Edinburgh. The first resident was Simon of Ramsay, and the castle stayed with the same clan for almost 800 years until 1977. Legend has it that a Ramsay lord of the 16th century had a mistress named Lady Catherine. When his wife found out, she imprisoned Catherine in the castle and starved her to death. Her ghost is said to haunt Dalhousie Castle to this day, sometimes tapping guests on the shoulder. Dalhousie is now a luxury hotel and a popular spot for weddings. Ownership of the castle changed hands just a couple of months ago. Photograph by Flickr user John Ross. 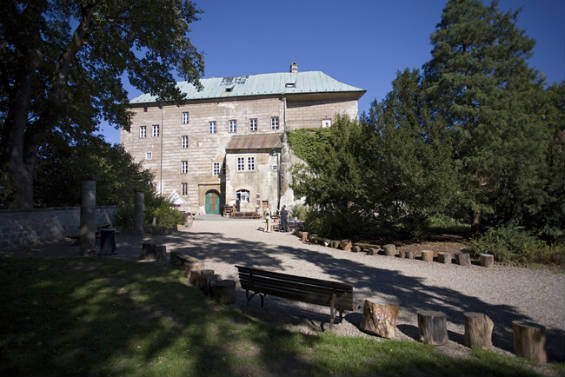 Houska Castle is nicknamed The Gateway to Hell. Built in the 13th century in what is now the Czech Republic, it is said to have been constructed over a bottomless well that is a portal to hell, and therefore the structure was built to contain it instead of protecting residents from outside forces. The legend says:

When construction of the castle began, local prisoners who had been sentenced to death were invited to the site and offered a reprieve for being lowered down into the cave and then reporting there findings.

The first volunteer was lowered down, and after only a few seconds after disappearing into the darkness his screams were heard above. When unfortunate fellow was pulled to the surface his hair had gone white and he was still screaming. The prisoner was sent to an insane asylum where he died two days later from unknown causes.

The current owners have renovated the castle, and opened it to the public for the first time only in 1999. Houska Castle was the subject of the TV show Ghost Hunters International in 2009. Leap Castle is in County Offaly, Ireland. It was built by the violent O’Carroll clan in the early 1500s, and was the scene of numerous murders, often among family members. The victims are said to still walk the halls, and even move things around. Another legend says that the castle was built over a druid initiation site, and maintains the spiritual energy that caused it to be chosen for that purpose. The most common apparition at Leap Castle is called the Elemental, although who it is supposed to represent is still debated. Photograph by Flickr user ChiaLynn. Predjama Castle in Slovenia is built into the entrance of a cave system that runs through the mountain, making it a siege-proof fortress. It was first constructed in the 14th century, and expanded several times. Predjamski Castle has its own railway and concert hall! You can see panoramic photos of the castle interior and the cave under the castle. The cave beneath has three entrances, handy for exit in case of attack. There is reportedly a torture chamber inside the castle, and a deep pit with ancient murder victims at the bottom. Photograph by Flickr user Sergio Morchon. Chillingham Castle is in Northumberland, near the England-Scotland border. Originally built in the 12th century as a monastery, it became a military stronghold in the medieval battles between the two nations. The current owners claim that it is the most haunted castle in Britain, with sporadic appearances by the “blue boy,” Lady Mary Berkeley, and other ghosts. Photograph by Flickr user Jo Jordan. 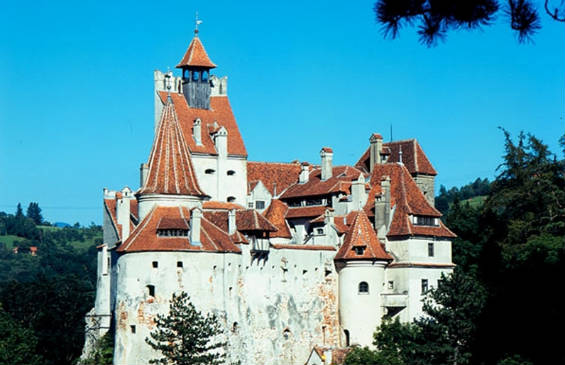 This is Bran Castle near Brasov, in the Transylvania region of Romania. It has become famous as "Dracula's Castle," but historians don’t think the despot Vlad the Impaler ever actually lived there. According to some accounts, he spent a couple of days in the dungeon of Bran Castle as the guest of the Ottoman Empire. However, Bran Castle inspired Bram Stoker’s writings, and it was also used in some Dracula films. It's scary-lookingenough! 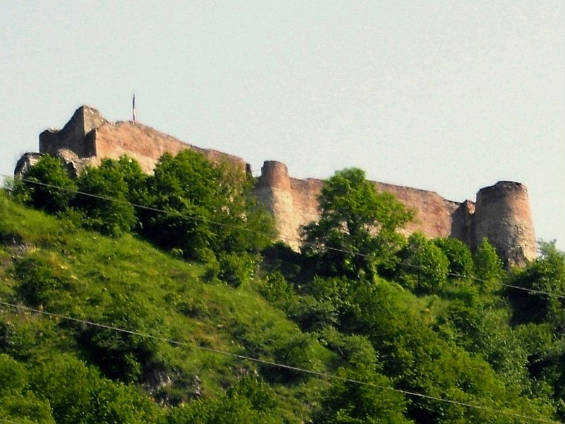 Vlad Tepes actually lived at Poenari Citadel in the Wallachia region of Romania. High on the side of a mountain, it was an imposing military fortress. Poenari was abandoned in the 16th century. A landslide in 1888 brought down some of the walls. To see the ruins of Poenari Castle, you must climb 1,426 steps (or just click here). You can also see a speculation on what the fortress looked like at its peak. When you consider the thousands of people Vlad put to death here, the site becomes chilling. Photograph by Wikipedia member Beata Jankowska. Hunyad Castle (Castelul Huniazilor) is in Hunedoara, Romania, a Transylvanian town. It was built by King Carol Robert of Anjou (also known as Charles I) in 1307 and completed in 1315. It was restored in the mid-15th century and modified many times since then. It also goes by the name Corvin Castle (Castelul Corvine?tilor) and even more names in other languages. This castle was in Hungary when it was owned by King Matthias Corvin, a contemporary of Vlad III. Corvin, a former friend, imprisoned Vlad in Hunyad Castle for seven years, but then became allies again and Vlad was set free. Vlad's lengthy stay in the castle gives it a valid reason to be called "Dracula's Castle," which lends itself to tourism. The British TV show The Most Haunted Live! filmed for three nights in the castle in 2007. Photograph by Flickr user R Sears.
Miss Cellania
FACEBOOK 0
TWITTER
EMAIL
Subscribe to our Newsletter!
SIGN UP NOW
MENTAL FLOSS
ABOUT RSS CONTACT US PRIVACY POLICY COOKIE POLICY TERMS OF SERVICE
The Players’ Tribune FanSided 90MIN DBLTAP The Big Lead
MentalFlossVideo on YouTube @mental_floss on Instagram @mental_floss on Instagram @mental_floss on Twitter
Subscribe to our Newsletter!
SIGN UP NOW
The Players’ Tribune FanSided 90MIN DBLTAP The Big Lead