Some people play with their food, while others make a game out of cooking -literally! Tetris is great for all kinds of food preparation because it's simple, recognizable, colorful, popular, and fun. Some of these you can try out yourself!

A batch of colorful cookies were made from dough shaped into Tetris blocks before they were baked by andromache. The icing is enhanced by a thin outline to accentuate the Tetris shapes. Photograph by Flickr user mache. Artist Eva Funderburgh mostly works in ceramics, but also made cookies with Tetris blocks built right inside! It's part of her pixel cookies project, in which she explains through photographs how it's done. How fun is it? Well, you start with a Play-Doh extruder. Really. Photograph by Flickr user Eva Funderburgh. 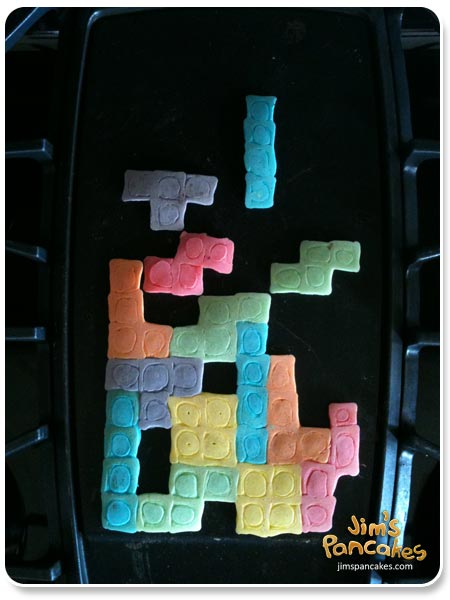 A bento box by Night-thing uses cut vegetables on a bed of rice to inspire young gamers to eat their lunch! Photograph by Flickr user Night-thing. 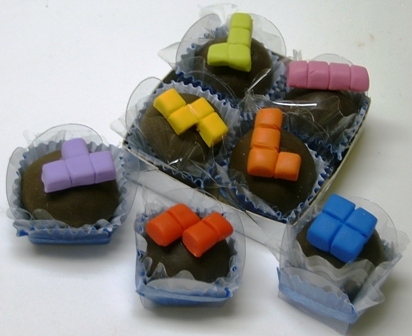 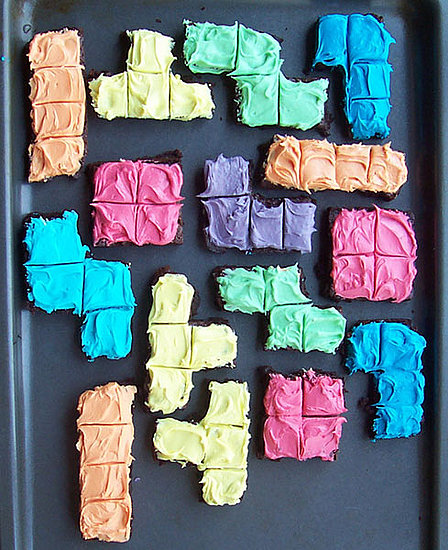 Fraske Designs posted instructions for making Tetris brownies. Make your brownies thinner than normal, and color small batches of frosting to set them off. The hard part is cutting the shapes, but at least you can eat your mistakes! 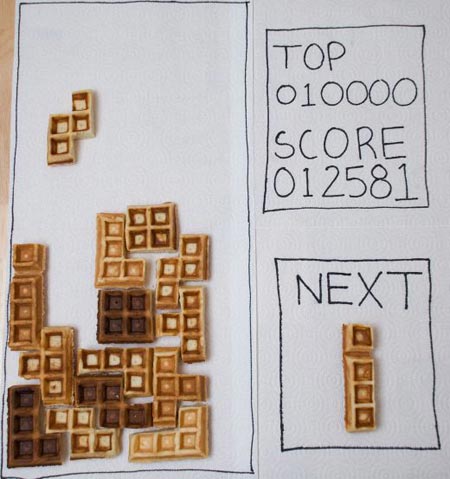 Since waffles are already made in a grid, it should be relatively easy to cut out pieces to make a game of Waffle Tetris! The addition of syrup would make a real mess, though. 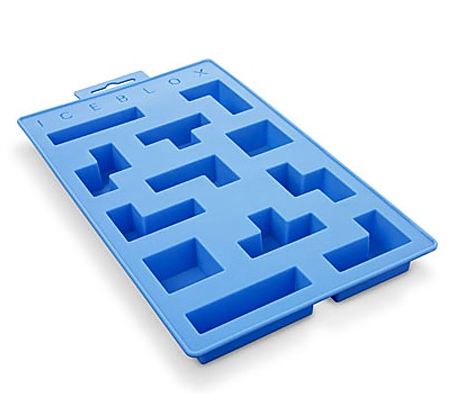 You can get a pliable silicone rubber Tetris-shape ice cube tray and form blocks of the various block shapes. Take the time to color your water and make the shapes in different colors for an impressive addition to a video game-themed birthday party. Joakim cut a batch of gingerbread into Tetris shapes and, just in case someone didn't catch the video game theme, added a Pac-Man to the middle! Another picture shows the cutting process. Photograph by Flickr user Craig Morey. This clever Tetris cake was served in 2008. According to the photographer, the top of the "video screen" is to the right, so what we see is the groom figure waiting for his bride to arrive sitting on a falling tile! That idea "just fits." Photograph by Flickr user bea & txema.

As a bonus, here's a video by Sam Q. Kim that uses Gummi Bears to recreate various video games (including Tetris) in stop-motion form. Ten pounds of Gummis were used, and then eaten.

This post is about video game-themed food. If you want to read about food-themed video games, see Playing with Your Food: Fast Food Videogames.