Libraries are quiet places visited by children and literary-minded people and sometimes the occasional mouse. That makes them wonderful places for cats to hang out. Many libraries have resident cats that become quite the local characters -and sometimes even famous! We posted about some of them before; now here are nine more library cats.

Tober lives at the Thorntown Public Library in Thorntown, Indiana. Librarian Karen Niemeyer adopted Tober in 2008, but her dogs had a problem with that, so Tober took up residence in the library. He says:

I have one Assistant Boss and a bunch of Assistant Assistant Bosses, one of whom is a Lergic. Apparently Lergics can't be around Cats a whole lot, but luckily I don't bother them too much, because all sorts of Lergics visit the Library and don't even know I live here.

You can follow Tober's continuing adventures on his blog. The Schoharie Free Library in Schoharie, New York has a lovely ginger cat named Andy. Since at least 2007, he has been spending time at the library and charming patrons although he officially lives at a nearby home. Those days ended when the library was damaged by hurricane Irene in 2011. The library has been rebuilding since, and Andy came for a visit to inspect the progress just this week. Photograph by Flickr user Schoharie Library. 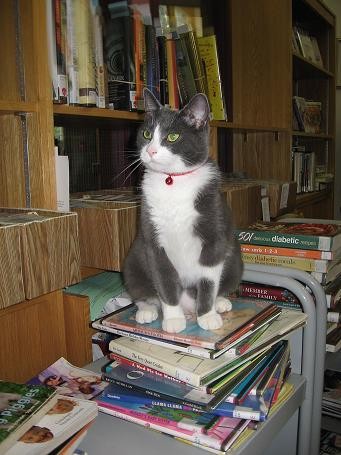 The Cazenovia Public Library in Cazenovia, New York had always welcomed cats. The current library cat Page has been welcoming patrons to the library since 2009. Wesleyan College in Macon, Georgia has a library cat at its Willet Memorial Library.  The current cat Libris was a feral feline adopted to replace the longtime library cat Squeakers, who passed on in 2008. Photograph by Flickr user Courtney McGough. The Central Library of the Victoria University of Wellington in New Zealand had a cat named Sandy Rankine for many years. Sandy suffered from diabetes in his later years, but library patrons and fans did what they could to help with his medical needs. Photograph by Flickr user Jonathan Ah Kit. 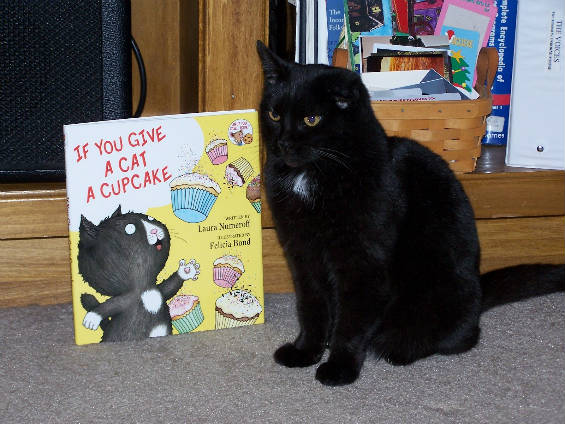 The Mooresville Public Library in Mooresville, Indiana is home to Cauli Le Chat, who is sometimes called Kit Cauliflower due to ear damage from a fight. She does not live at the library full time, but goes home with an employee at night. During the day, she is the library's "roving reporter," lending her name to a blog about everything that goes on at the library. Cauli also has an alter-ego, a cardboard cutout of herself called Flat Five (short for Cauli V), which travels to other libraries and interesting places. 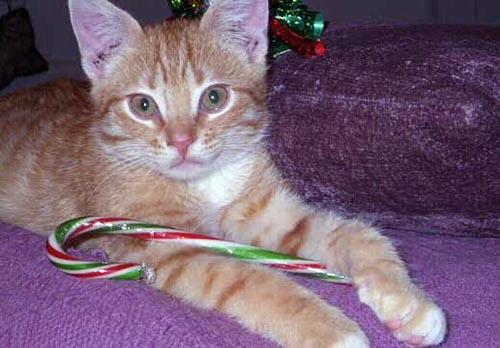 The Arkansas School for the Blind has a formal library cat program that goes back more than ten years! It was a natural idea, as librarian Susan Loesch is also involved with the organization Feline Rescue and Rehome. It all started with Piper, a kitten rescued from a drainpipe in 2000. Piper moved into the library, interacted with the students, and even lent his name to the prizes for the accelerated reading program. He was soon joined by Big Footsie in 2001. Current cats at the library include Alex, Shadow, and Bob. 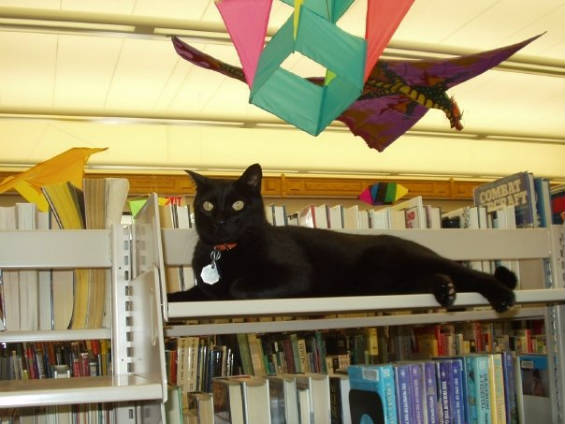 The library in Pine River, Minnesota, welcomed Browser in 2002, and he has been going strong ever since. Browser has his own blog and Facebook page. 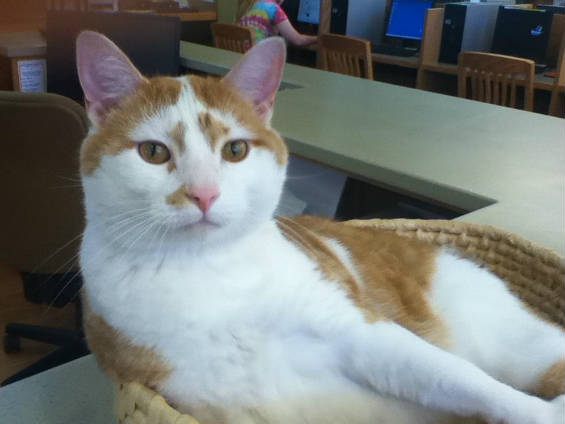 Anna Porter Public Library in Gatlinburg, Tennessee named the cat Porter C. Bibliocat, whose visage graces the library's Facebook page. Porter was named after the library's founder, and the "C" stands for "Catalog." He was adopted in 2009. There were some complaints about a cat in the library, but the board decided Porter would stay, although if a patron requests, Porter will be taken to a secluded area while they browse the books.

See more library cats in our previous post 8 Library Cats, and you may also enjoy our extensive series on Bookstore Cats.