The races are strange, but the title refers to the boats. With a little ingenuity, you can build a boat, loosely defined as a "flotation device," out of anything!

The Beer Can Regatta is an annual event at Mindil Beach organized by the Lions Club of Darwin, Northern Territory, Australia. The participating boats are all made of beer or soda cans! The highlight of this year’s regatta, held Sunday, was the appearance of Extravacans, an enormous motor-powered boat constructed of 30,000 cans! A new category was created for the much bigger “superboat,” which it won as the only entry. In the main race, called The Battle of Mindil, the winner was The Flying Posties. There were other races and competitions in various categories. As you can see here, it is customary to slow down one’s competition by any means available. Photograph by Brad Fleet. 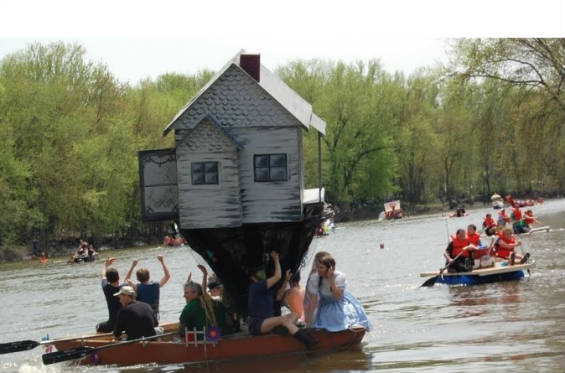 The New Paltz Regatta is for homemade boats of all kinds. This year's race took place on April 29th in New Paltz, New York. The annual event began in 1955 when it was launched by the the Delta Kappa Fraternity of SUNY (State University of New York). Now the race is open to anyone, and accompanies a downtown festival. The only rules are that the boats must be human-powered and homemade.

The 21st Annual Schooner Wharf Bar Minimal Regatta was held in Key West over Memorial Day weekend. These boats are made of a sheet of plywood, a couple of 2x4s, and duct tape. A few other insignificant materials are allowed, but the results are always good for a laugh. Prizes were given for boats that won the race, boats that sank, creative designs, best costumes, and other categories. See pictures of the event. The building of canoes out of concrete began as a challenge for engineering students to design a boat to demonstrate the principles of physics. However, this exercise grew into an exercise in designing better materials; i.e. improving concrete. Intramural competitions began in the 1960s, which expanded to competitions between schools in the 1970s. The American Society of Civil Engineers sponsors a nationwide Concrete Canoe Competition. The winner of the 2012 championship was California Polytechnic State University, San Luis Obispo, for the third year in a row. Photograph by Flickr user Student Design and Experiential Learning Center. Several communities stage autumn events in the sport of Pumpkin Paddling, in which you make a boat out of a giant pumpkin and race against other pumpkin boats. One of the biggest competitions is the Damariscotta Pumpkinfest & Regatta in Damariscotta, Maine. The pumpkinfest has contests for growing, decorating, and carving pumpkins, but the regatta is the biggest draw. Watch a video to see how it’s done. Photograph by Flickr user Chiot’s Run. 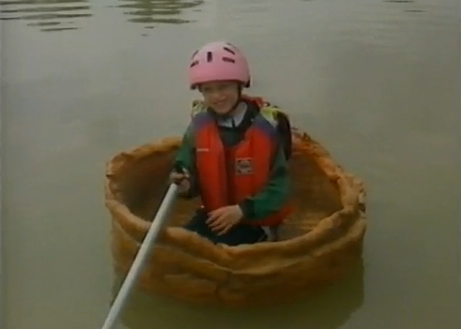 Many years ago, Simon Thackray dreamed of floating down a river on a Yorkshire pudding. That eventually led to a 1999 event in which people built boats out of Yorkshire pudding. Now it's an annual event in Brawby, North Yorkshire, England, sponsored by The Shed. The boats are constructed of flour, water, and eggs, and given a good coat of shellac to make them fairly waterproof. Watch the boats in action in this news report.

Teams from 15 schools competed in the Solar Splash World Championship race at George Wyth State Park in Waterloo, Iowa. Crossing the finish line first does not guarantee a win in this race: technical inspections, design, and craftsmanship are among the several parameters that count toward a win. The winning team came from Istanbul Technical University. See a promotional video about the event. 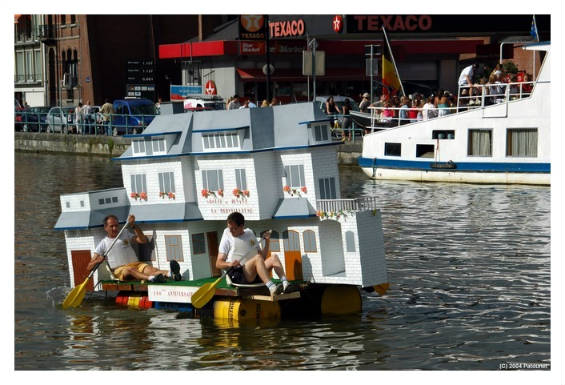 La Regate des Baignoires (The International Regatta of Bathtubs) is held every August in Dinant, Belgium. The boats must contain a bathtub and no motor, but beyond that, creativity is the word. Prizes are awarded for "beauty, novelty, and representation of the town" as well as who manages to cross the finish line first. Photograph by Julien Dolhet.

The Milk, Bread, and Honey Festival is an end-of-August tradition in Jelgava, Latvia. One of the biggest events of the festival is the Milk Carton Boat Race, now in its tenth year. Last year, 36 human-powered boats made completely of milk cartons raced, and also competed for prizes in the most original and funniest crew competitions. The event aims to promote both dairy consumption and recycling. The building of cardboard boats originated in 1962 at Southern Illinois University as an exercise in engineering design. The idea spread, and now many regattas are organized under the supervision of The Great Cardboard Boat Regatta. They'll even give you tips on building your own boat out of cardboard. The picture above is from a cardboard boat race in 2010 in Hollywood, Florida. Photograph by Flickr user Experiment 33.