Just a couple of days ago, we had 10 Strange and Wonderful Boat Races. Readers suggested other boat races, hinting that a list of ten was not enough. So here are ten more events in which you can enjoy some awesome and unusual boating, floating, and racing.

The Minneapolis Aquatennial festival features Milk Carton Boat Races which were held last weekend. Entrants who build boats floating on milk cartons can compete in different races and events, including one in which boats are decorated as cows! The festival itself continues through this Saturday. Photograph by gomattolson via Wikipedia.

Kaljakellunta is a Finnish term that sort of translates to Beer-Floating. Held annually in waterways near Helsinki since 1997, it is essentially a party held on rubber rafts or other floats. Kaljakellunta 2012 will be on July 28th. If you are in Finland, or can read Finnish, you'll find more information at Facebook. A more comprehensive video that is a little NSFW can be found here. 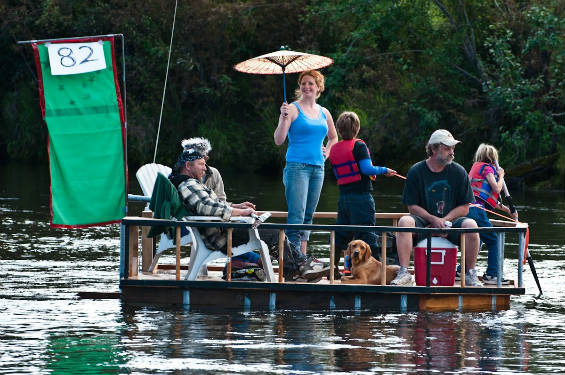 The Red Green Regatta in Fairbanks, Alaska, is not a race, but a showcase for boats made of duct tape. The 2012 race is this Sunday! There's still time to register, but do you have time to make a boat and get to Fairbanks? The rules for boat building are quite lenient; all that is required is that you use a minimum of one roll of duct tape. Prizes are awarded for creativity and construction, seaworthiness, and how the craft incorporates the Red Green theme. Red Green himself will be on hand to help select winners. Photograph by Andrew and Jennifer. The Denny's Seafair Milk Carton Derby was held last weekend as part of Seattle's Seafair, which continues through July 29th. Although all boats are made of milk cartons, different sizes, speeds, and classes have their own races, as well as a special class of races for "entries where design took precedence over speed." See pictures from this year's derby here. Photograph by Flickr user scalpel3000. 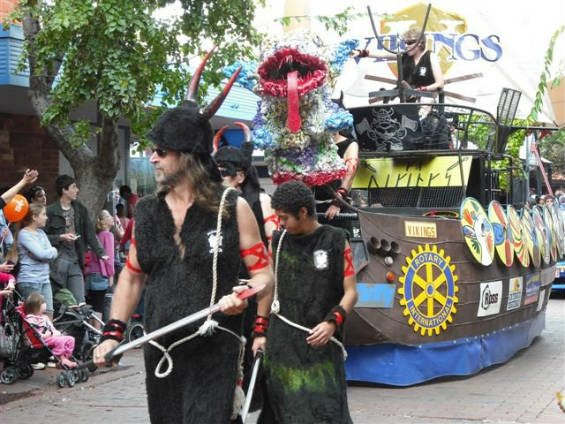 The Henley-on-Todd Regatta will take place in Alice Springs, Australia, on Saturday, August 18th. This is a boat race without water, held on the dry Todd River bed. The annual event began in 1962 as a parody of the Henley-on-Thames race between Oxford and Cambridge Universities, with the difference being that this race is in the desert. Having no body of water, the boats are bottomless so the sailors can race with their feet. There are competitions in many classes, for different size crews and even a motorized event, which is limited to members of the Rotary Clubs who sponsor the regatta. Photograph from Henley-on-Todd Inc.

6. Anything That Floats Regatta

The Anything That Floats Regatta takes place annually in Key Largo, Florida. This year's event is scheduled for August 17th and 18th. Build a boat out of anything and compete for the fastest in the races, best decorated boat, or best looking crew categories. Last year, there were also winners for categories such as most people on a boat without sinking and best hard luck story. 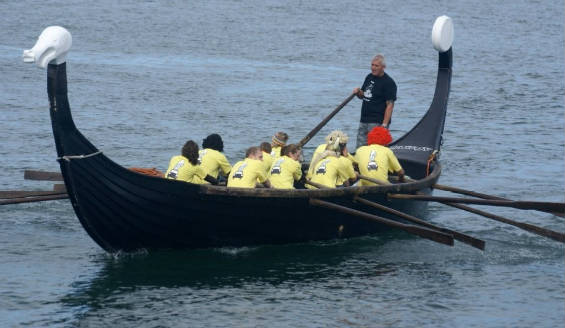 The World Championship Viking Long Boat Races take place in Peel Harbour on the Isle of Man. This event has been held since 1963, and the 2012 event is this Saturday, July 21st. Seventy teams of ten people are expected, each heaving 11-foot-long oars in the manner of Vikings. This is one boat race in which the participants do not build their own boats; four existing Viking boats are used. Each weighs around 2.5 tonnes! Pictured is Team CabCard, which won the Best Newcomer award in 2010. 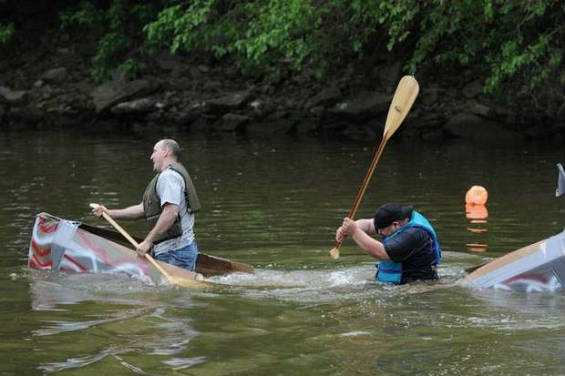 The BAGM Redneck Regatta is part of the Celebrate De Pere festival in De Pere, Wisconsin in May. The boats are human powered and homemade, of very specific materials:

Allowable building materials include cardboard (including “sonotubes”), wood glue, duct tape or packing tape and spray paint. Nothing else! 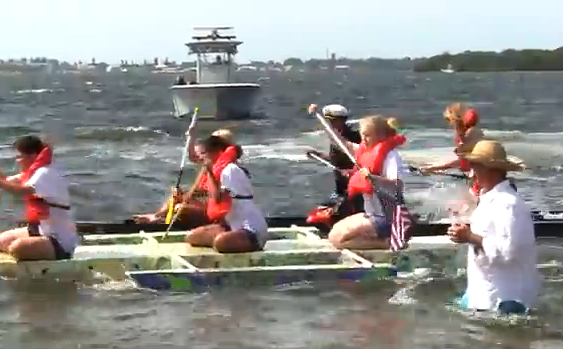 The 2012 De Soto Bottle Boat Regatta in Bradenton, Florida, took place on April 14th. The annual event is sponsored by the Hernando DeSoto Historical Society. The boats are homemade and depend on plastic bottles for floatability. Prizes are awarded for the fastest to paddle across the finish line and for style, construction, and crew costumes. See more photographs of this year's race at the Bradenton Herald. Image from YouTube. 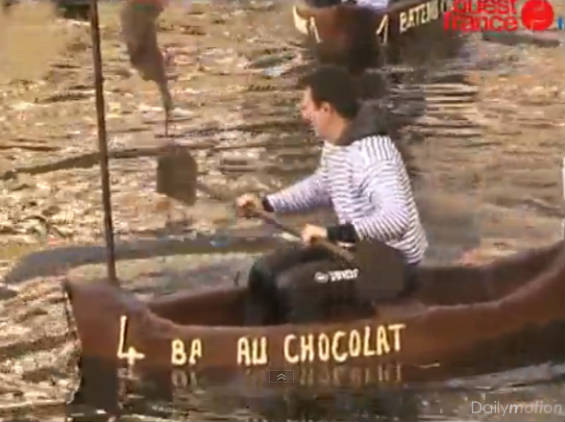 In 2010, French master chocolatier Georges Larnicol made a boat out of chocolate as a publicity stunt. A year later, he went one better by staging a chocolate regatta, featuring seven chocolate boats, all made by his company. Three of the boats sank, but the crowd enjoyed it and the headlines were worth it. This is one regatta that is not likely to become an annual event.