July 22 is Pi Approximation Day because pi's fractional approximation is 22/7. To celebrate, here are some math foods Miss C rounded up last year.

Food is often used to illustrate shapes, and recipes are used to introduce children to measurement and proportions. But if you really care about your mathematics -and your food- there are ways to take the marriage of math and food to the next level!

The simplest way to incorporate math into food is to bake a Pi Pie. Meg made this lovely Pi Pie to celebrate Pi Day in 2004. It's a normal fruit pie with the pi symbol carved into the top crust. Then the numerals of pi were cut from pie crust and added to the rim of the pie. Yummy! 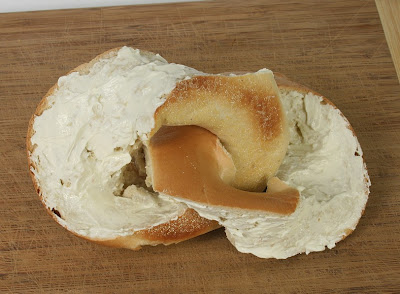 George Hart, who I've run across before, has turned breakfast into a puzzle with a bagel that has been sliced into two halves that are linked together! The secret is that the cut itself is a two-twist Möbius strip. If you can't quite visualize that, there are explicit instructions for this project. This is sure to impress your mother-in-law, one way or another. Lenore at Evil Mad Scientist Laboratories made cookies in the fractal pattern of the Sierpinski Carpet. These are made with butter cookie dough, a portion of which was colored with delicious cocoa powder. The dough is shaped, stacked, and stretched, then stacked and stretched again, and when the fractal is at your limit, the dough is sliced to make cookies. Illustrated instructions are included at the laboratory link. Lenore also gave us instructions for making this beautiful fractal cupcake in the Koch Snowflake pattern. This uses the same method of stacking and rolling out iterations of fondant, this time tinted blue or left white. 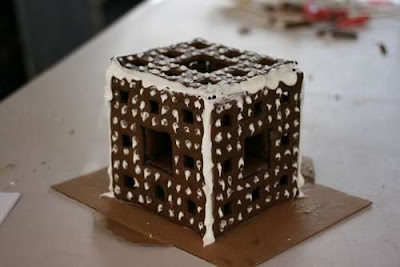 This fractal gingerbread house resembles the Sierpinski carpet a bit, but a Menger sponge contains holes rather than cocoa cookie dough.

A Menger sponge is a 3D fractal that starts with a cube. In each iteration the surface of each cube is divided into 9 sections and the middle section is pushed out.

In the next iteration, you look at the smaller subcubes of the original cube and repeat the same process.

in the picture below you can see the same process. With this gingerbread fractal we'll be making a level 2 Menger sponge and using decoration to make it look like a level 3.

The actual making of the gingerbread is easier than the explanation of the fractal. Understanding fractals can be plenty intuitive when you've seen them built. 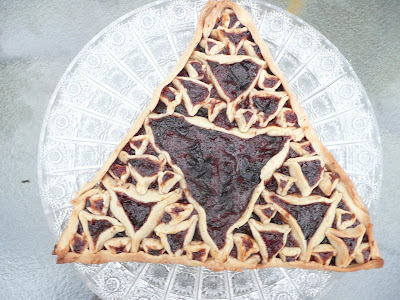 Hamantaschen is a Jewish holiday pastry that comes in a triangle shape filled with prunes, poppy seeds, or other sweet filling. Deborah Gardner took her family's traditional recipe and made "Sierpinskitaschen," or Sierpinski Hamantaschen. This is not pieced together like the cookies, but it begins with a large pastry which is then subdivided as may times as you can. 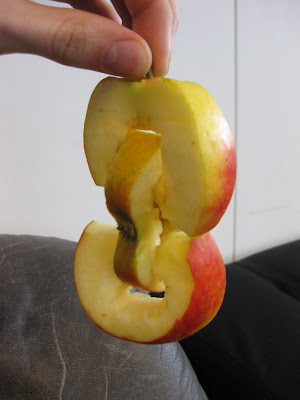 Marius van Voorden enjoys food sculpting. He was inspired by Neil Fraser's soap carvings of links from a single solid, and decided to do the same with apples. You won't find step-by-step instructions, but I suppose it's about as difficult as cutting the bagel above. 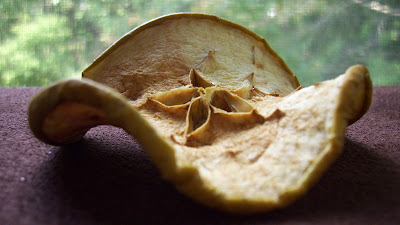 Vi Hart has a gift for making mathematics into something enjoyable, even if you can't keep up with the math. She wrote on The Hyperbolic Nature of Dried Fruit Slices because she found it strange that when sliced fruit dried, it not only shrunk but changed shape completely, in a predictable manner. For example, as it dries, an apple slice curls up into a hyperbolic plane! Hart did some experiments and found that it made no difference whether she cut the apple vertically or horizontally, or whether the peel was removed. The same effect can be seen in potato chips, which are fried instead of dried. See Hart's other posts on slicing apples into mathematical shapes. 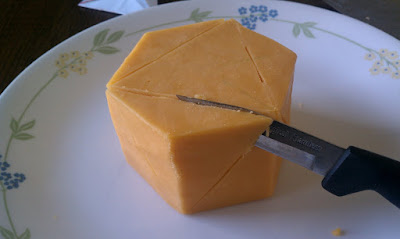 High school senior Luyi does many things with geometric shapes. Recently she cut the cheese into a multitude of shapes. A solid cube of cheese became a hexagonal prism, then with some intricate-but-understandable steps, Luyi was left with "one funky-shaped polyhedron and six small congruent tetrahedra." Then the fun starts, as you can find the volume of your irregular polygon by calculating the volume of the shapes you cut off! Or, you could just get the crackers out and finish off this experiment. 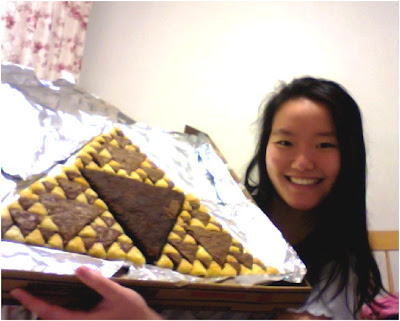