If you want to create something that will appeal to internet surfers, keep this in mind: the essence of comedy is the juxtaposition of opposites, or at least somewhat unrelated things. When you combine the pleasantness of something cute with the excitement of something popular but not cute, you get a surefire hit -that is, if you have the talent to pull it off. Several years ago I posted Cute Little Cthulhu on this same theme. Those mashups came from juxtaposing the horror of Cthulhu with something cute like babies, fuzzy slippers, or Hello Kitty. In more recent years, the "cute" tends to come from the popular toys of the My Little Pony series, which provides the adorably shaped horses and a dose of nostalgia for those that grew up with them. There's no end to the horror that artists will mash with the ponies.

Sara Bean makes customized My Little Ponies any way you want them! These two pay homage to Star Trek, as the Kirk pony wears a proper command uniform and has an Enterprise decal/tattoo/brand on his rear flank. Spock has not only Vulcan ears but also a unicorn horn! You can order yours through her Etsy shop. Check out her Transformers and Boba Fett ponies, too! 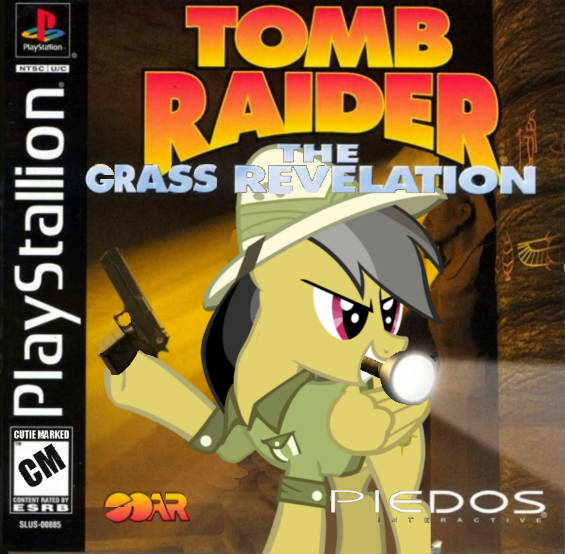 DeviantART member nickyv917 puts My Little Ponies into video games, as least as far as the cover art goes. Would you like to play Battlefriend 3? How about Manecraft? Or Assassin's Steed? There are pages and pages of these! 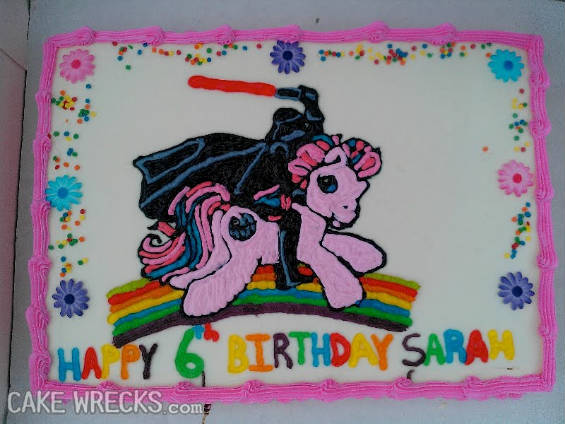 Six-year-old Sarah got a birthday cake featuring her pop culture favorites: Darth Vader riding a My Little Pony! And little girls should get what they like on their birthday cakes. This mashup cake is only one of Sarah's awesome birthday cakes that combine Darth with figures such as Tinkerbell and the Disney Princesses. See the rest at Cake Wrecks. 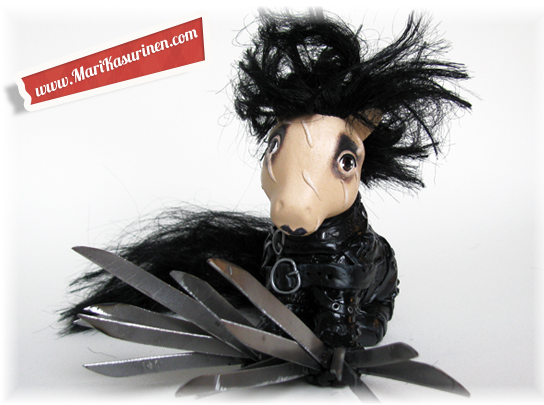 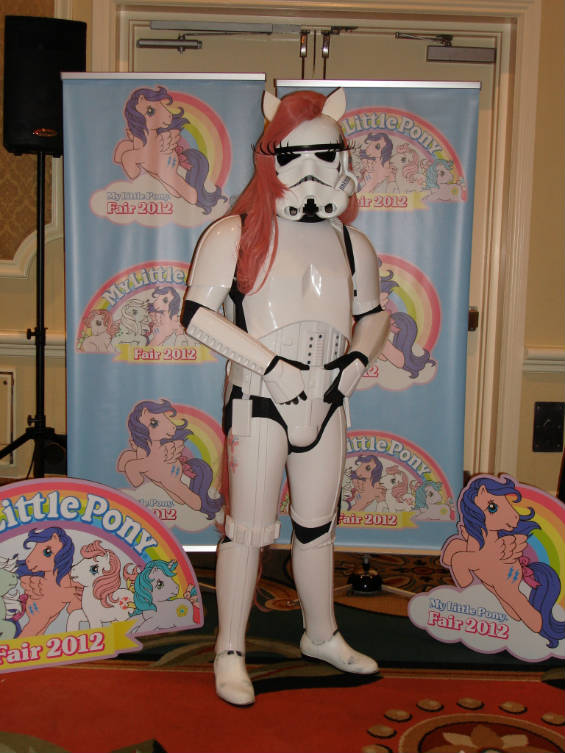 Twitter user Dakster Sullivan spotted this cosplayer who combined his love of Star Wars and My Little Pony by dressing as Flutter Trooper! 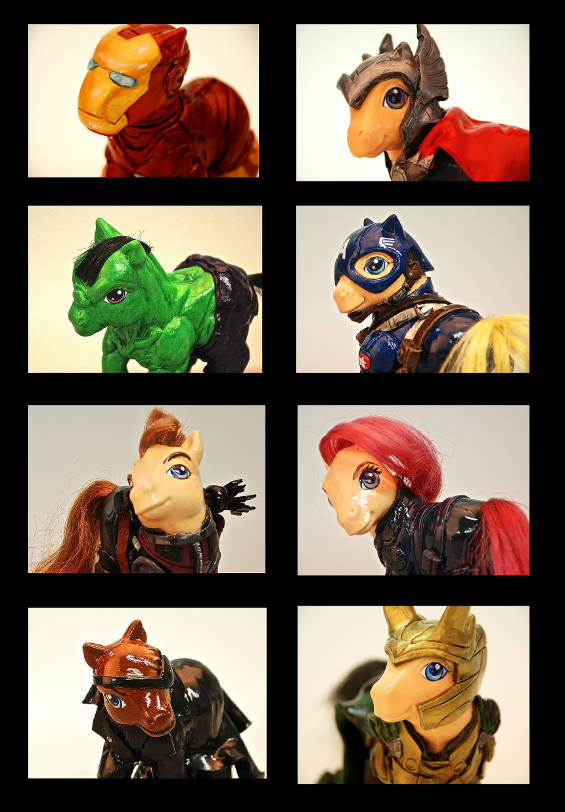 Eight of the characters from The Avengers look good as ponies! Bad guy Loki is outnumbered, but each character stands on its own as well. DeviantART member EatToast made these mashups, and posted each separately and together. You'll find links to each here. 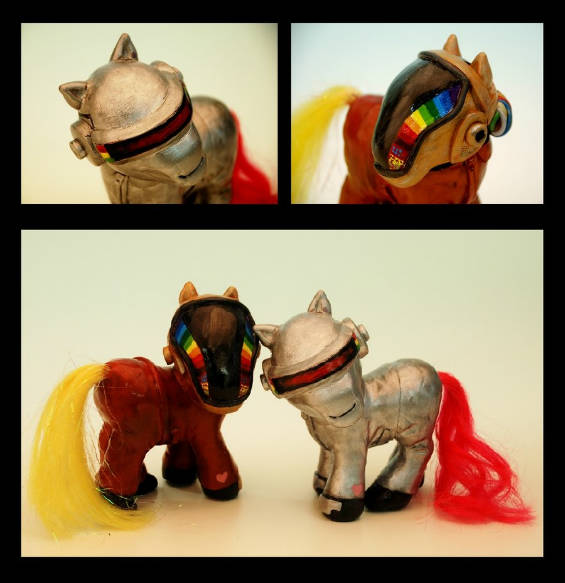 EatToast has quite a portfolio of My Little Pony mashup art, including a lot of Doctor Who ponies, but I was particularly drawn to this pair of ponies based on the musical duo Daft Punk. They are made with My Little Ponies layered with Sculpey and painted with acrylics, recreating the musicians' iconic helmets.

The soundtrack of a The Dark Knight Rises trailer was synched to relevant scenes from the My Little Pony cartoon series to make this wonderful mashup by cloverfieldmoster, who does quite a bit of this sort of thing. Check his YouTube channel, Cloverfieldmoster's Equestrian Network, for more My Little Pony video mashups. Another source for MLP video mashups is Lost in Equestria. 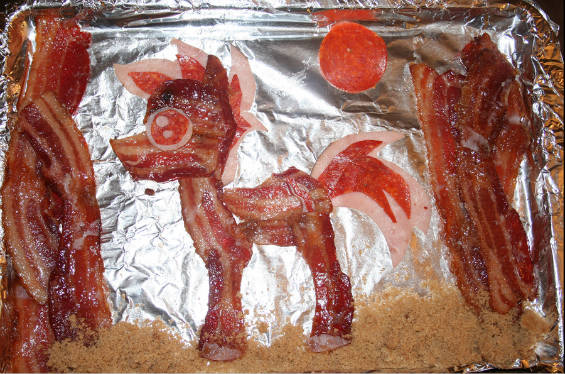 DeviantART member BAwesome-BAcon has lots of MLP-themed art, most of it edible, but is particularly famed for this pony made of bacon.

12. The Four Little Ponies of the Apocalypse 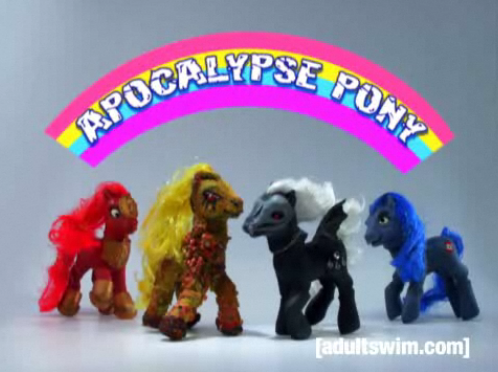 Robot Chicken gave us this video mashup of Biblical prophesy and My Little Ponies called Apocalypse Pony. Favorite quote: "I love you, Pestilence!" It's a parody of an ad for new MLP toys. Get a good look at the actual ponies used in the video at Popped Culture. My Little Pony mashups can be useful! Matt Pinner made this pony called Sparkles with a soldering iron for a horn. It was inspired by an idea from Sean Bonner. 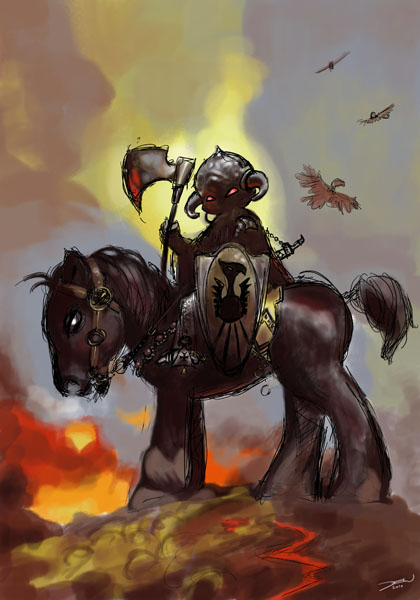 Frank Franzetta painted many pictures of The Death Dealer, but this one is what fans remember best. DeviantART member zedew recreated the painting in a My Little Pony version in homage to Franzetta after learning of his death two years ago. 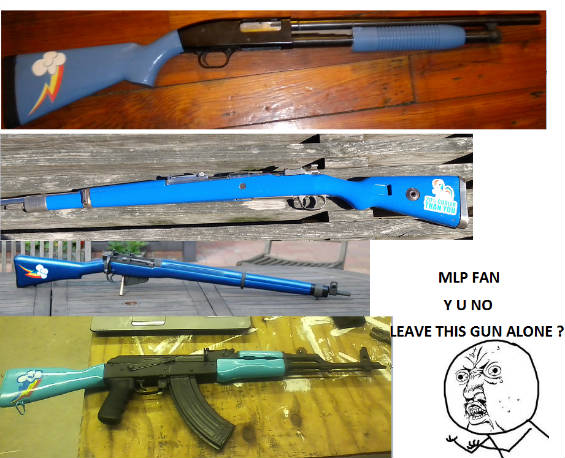 Gunbronies are gun enthusiasts who are My Little Pony fans. They sometimes add MLP designs to firearms to show their allegiance, and their art skills. Erin Palette rounded up pictures of some. She also owns a holster featuring pony Luna on it. DeviantART member Annadill is a member of an Equestria Task Force, which are MLP airsoft gun groups with chapters all over. One of his artworks is a set of grips for a Smith & Wesson sporting the symbol of pony Rainbow Dash. Another is a leather holster with the symbol of pony Applejack.