8 Who Rose to the Challenge

Almost five years ago, I wrote 9 People Who Did It Anyway, about people who excelled in the exact activity they weren't supposed to be able to. A dozen lists later, we still see new stories of such accomplishments. Some take on these challenges to continue what they were doing before they became disabled. Some do it because they don't like to be told they can't. Some do it to show the world that disabled people encompass a wide range of ambition and ability, just like everyone else. Others do it to raise money and awareness of those less fortunate. And some do it just because they want to. Each has a story worth telling.

Nick "Notorious" Newell is an MMA (mixed martial arts) fighter, lightweight category. He was born with a left arm that ends just below the elbow. Newell had a distinguished high school and college career in wrestling, and an amateur MMA record of two wins and one loss. Since turning professional, he has an undefeated record of nine matches. His biggest challenge so far is finding opponents, as many fighters are unwilling to take him on. On December 7th, Newell earned the XFC lightweight championship title by defeating Eric Reynolds in an 82-second fight, which you can see on video.

Zach Hodskins was born in 1996 perfectly healthy, except he was missing half of his left arm. Still, he became a basketball phenomenon in grade school, and a star on his middle school team in Tennessee. Then his family moved to Georgia, where Zach had to explain what happened to his arm all over again.

“Everyone wanted to know how I lost my arm, which is nothing new,” Zach said. “Now if you think about it, that’s funny because what they don’t know is, I never had it. So I got a serious face and I told them that it got bitten off by a shark. The look on their faces was priceless. I like that story; makes me sound tougher.”

As a junior at Milton High School, Zach is averaging 12 points a game and lands 60% of his three-point shots. See Hodskins in action. Ernesto Rabelo is a Brazilian surfer. When his son was born in 1992, he had high hopes for the boy to become a professional surfer, so much so that he named him after surfer Derek Ho. Derek Rabelo was born blind, but the dream remained. Derek has surfed all over the world, including Hawaii's famous Pipeline. Rabelo is the subject of a documentary now in production called Beyond Sight. See Rabelo in action at vimeo. 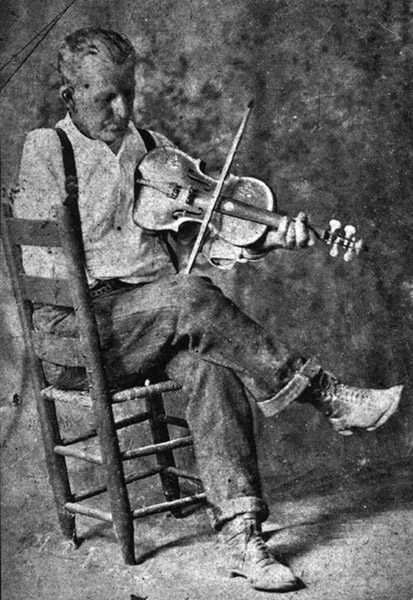 Henderson Brack was born in 1840 and served in the Confederate Army during the Civil War. He was wounded in battle, and his arm was amputated. Brack was an accomplished fiddle player before his injury, and afterward set about finding a way to play again. He held his bow between his knees and moved the fiddle up and down under the bow! Brack became famous across eastern Texas and western Louisiana as the one-armed fiddle player. 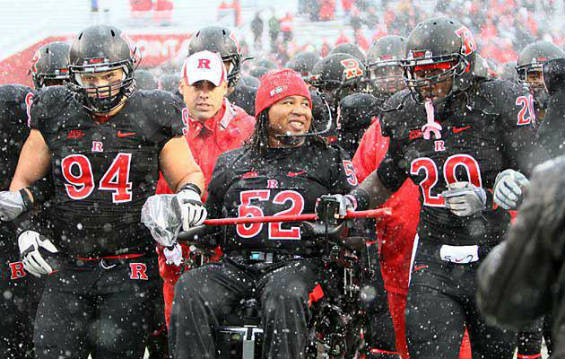 Eric LeGrand was a defensive tackle at Rutgers University until he became paralyzed during a game in October of 2010. His neck was fractured and his spinal cord injured. His mother was told that LeGrand would most likely be on a respirator for the rest of his life, and his chances of walking again were between zero and 5%. However. LeGrand announced his intention to recover. With practice, he developed the ability to breathe on his own within a few months. In early 2011, he had recovered sensation all over his body and could move his shoulders. Within a year of his injury, he began to use his arms again, and could stand with the help of a metal frame. LeGrand also returned to his studies, determined to graduate. Meanwhile, Rutgers coach Greg Schiano moved to the Tampa Bay Buccaneers and signed LeGrand to the team, completing the young player's dream of being part of the NFL. LeGrand accepted, then announced his retirement from football in order to free up the slot for another player. However, LeGrand works as an motivational speaker and appears in ads for Subway. His plans are to become a sports announcer. And to walk again. 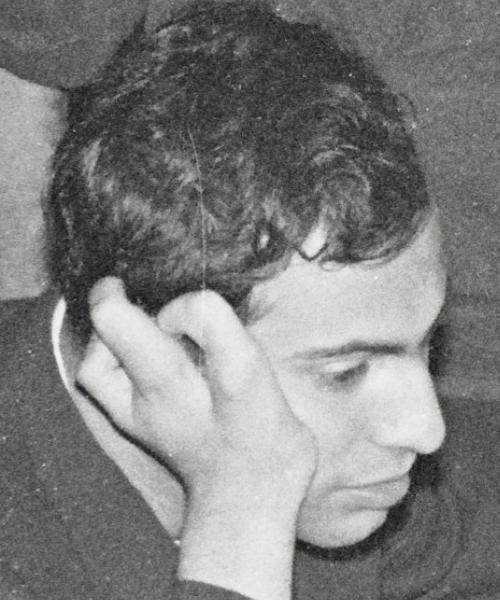 In 1957, Soviet chess Grandmaster Misha Tal became the USSR's youngest chess champion at the age of 20. He went on to become World Champion in 1960. Tal holds the world record for the longest winning streak in chess history -and he also holds second place in that record. Lifelong ill health combined with drug and alcohol abuse led to his death from kidney failure in 1992. Buried among the chess accomplishments in his biography is the fact that Tal was born with Ectrodactyly (Lobster Claw Syndrome) in his right hand, meaning his fingers were fused together. This didn't affect his chess game, but what even many chess fans don't know is that Tal was a piano player as well! Photograph by Wikipedia user Gerhard Hund. 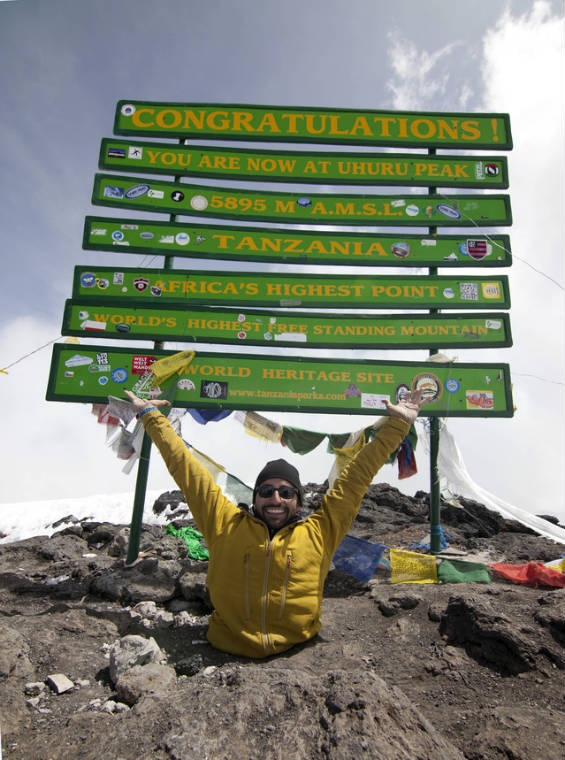 Spencer West has a genetic condition that prevented his legs' muscles from working, so they were amputated when he was a child. Since he has no legs, he walked on his hands. All the way up Mt. Kilimanjaro! West reached Uhuru Peak in Tanzania, the highest altitude in Africa, on June 19th of last summer. From his blog:

The moment the summit was within sight... it was incredible. We looked around - me, David and Alex - and realized that, after seven grueling days of relentless climbing, after 20,000 feet of our blood, sweat and tears (and, let's face it, vomit) we had actually made it. We were at the top. The summit sign seemed almost like a mirage.

Then it sunk in. We made it. To the top of the mountain. The mountain that I promised to the world I would climb. The bleeding fingers and blisters were all worth it. I looked at the guys, my two buddies who dreamed up this crazy plan with me, and realized we actually finished what we started.

West's announcement can be heard in a video from the BBC. His climb was not only a personal accomplishment, but it raised funds for West's charity, Free The Children, to bring clean water to villages in Kenya. 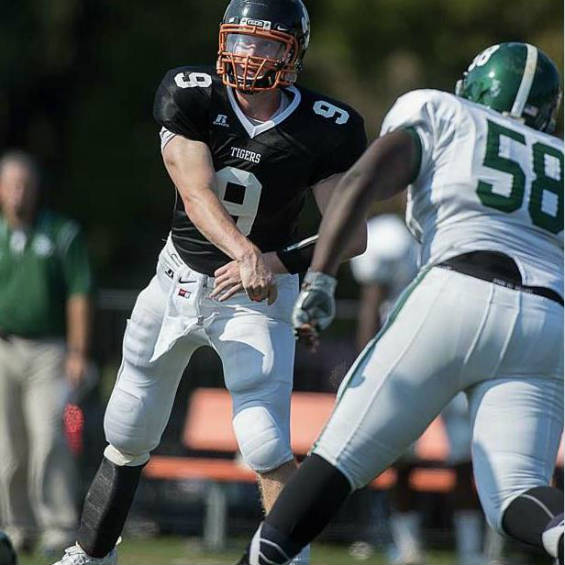 Jacob Rainey was playing quarterback on his high school football team last year when his leg was broken, but much worse, an artery was ruptured, which cut off his circulation. His leg was amputated a week later. Rainey wanted to return to football, and play quarterback again, but his therapists doubted that any prosthetic leg would be strong, flexible, and sensitive enough for the required moves. But Rainey worked hard and, with an athletic prosthetic made for skiers, returned to the field as starting quarterback last September at his high school. And just last week, Rainey announced that he will be playing football at the University of Virginia after high school.