If you're resolving to learn something new in 2020, Finland may be able to help. As The Verge reports, the Nordic nation is making its famous online crash course on artificial intelligence free to the European Union (EU).

At the end of this month, Finland will pass off the rotating presidency of the EU to Croatia, and as a parting gift for the holidays, Finland is sharing its class with the continent. The class, called Elements of AI, is being translated into all 24 official languages of the EU, which includes Portuguese, Spanish, Polish, French, and Italian. In its current state, which caters to Finnish citizens, the program is available in English, Swedish, Estonian, Finnish, and German.

By making the class free for all its people, Finland aimed to educate the public on important information that was normally exclusive to tech circles. More than 220,000 students have enrolled in the course since its debut.

Though the gesture is intended for the EU, people from around the world can take the course for free if it's available in a language they speak. The curriculum is broken down into six chapters that examine everything from the basic definition of artificial intelligence to the technology's implications in the real world. The sections are designed to take between five and 10 hours to complete, with the entire program lasting an estimated six weeks.

Elements of AI, which originally launched in 2018, is offered online through the University of Helsinki. You can find more free online classes offered by top schools here.

This Smart Wallet Only Opens With Your Fingerprint

Just about everyone has experienced that moment of panic when you realize you've misplaced your wallet, potentially leaving credit cards, cash, and identification cards out in the open for anyone to take. But what if the next person who picked up your wallet couldn’t even open it? The Cashew Smart Wallet uses fingerprint authentication and integrated Bluetooth to do just that, and you can get it today while it's 32 percent off.

The Cashew Smart Wallet is the result of a Kickstarter campaign that was funded by 382 backers, sending it way past its original fundraising goal. In addition to the fingerprint tech, the wallet itself uses Bluetooth to connect to your phone—this allows your phone to send you alerts if you ever accidentally leave your wallet behind.

You can even utilize the smart wallet’s crowdsourced GPS feature, which connects Cashew users and alerts them to be on the lookout for a locally misplaced wallet. The wallet runs on a rechargeable battery that will hold a single charge for up to nine months to keep you connected for longer.

You can get a Cashew wallet for yourself today at a 32 percent discount, which brings the final price down to $100. 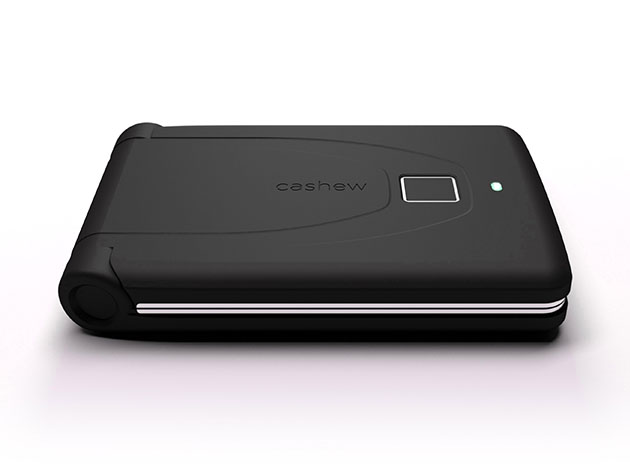