To help an animal, you must understand it. And to understand it, often, you need its poop. Feces is more than just waste—it’s a record of an animal’s diet, health, travels, and interactions with other species.

Collecting animal scat can be difficult on land, but it's really hard in the sea. The second sea-creature poop leaves its maker, it begins to dissolve and disintegrate in the water. So scientists who want to collect, say, sea turtle poop need to get a little creative.

That's why researchers at Australia’s University of Queensland designed custom swimsuits with poop catchers for their 120 kilogram (265-pound) subjects.

Queensland scientists Owen Coffee and Carmen da Silva had previously tried attaching flexible funnels to the back of the turtles’ shells, but the funnels kept falling off. They also caught six massive loggerhead turtles and kept them in saltwater tanks until they pooped, but the poop dissolved before it could be collected.

Coffee mentioned his predicament to the research station’s education officer, Kathy Townsend, who remembered that a previous research team had made tiny swim-fabric harnesses for their sea turtle hatchling subjects, as shown in the photo above.

Inspired, Coffee went to a nearby thrift shop and bought a bunch of rash guards—the full-length swimsuits surfers wear to keep their limbs safe from sunburn and scrapes. Coffee cut the arms and legs off the rash guards and stitched them into custom swimsuits, complete with removable collection bags—essentially, turtle diapers. 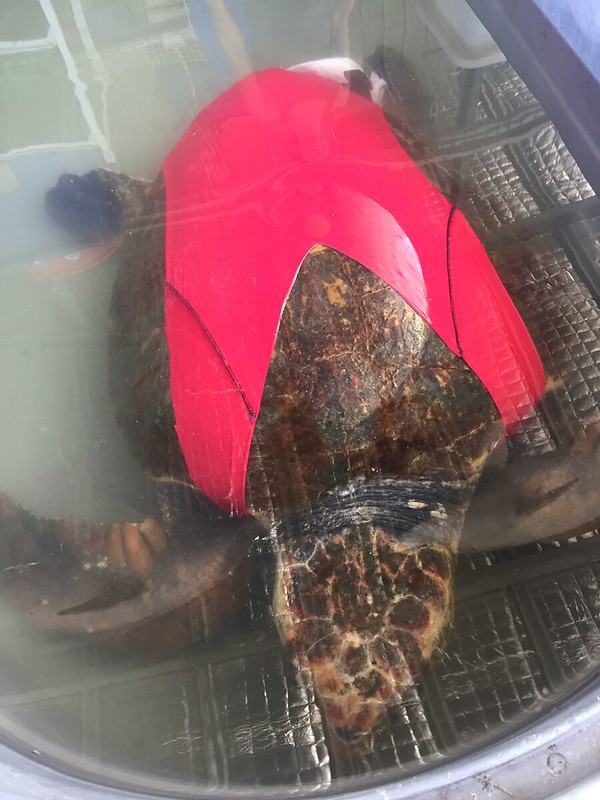 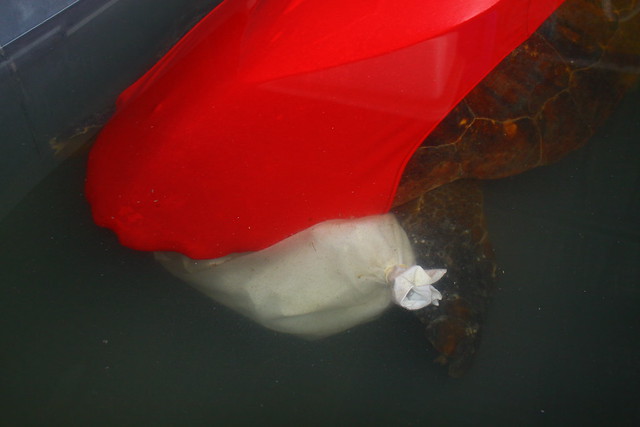 And like a child’s swim diaper, a turtle bathing suit allows its wearer a full range of motion in the water while keeping any special deposits safely contained. The difference is what happens when the collection bag is full. While a parent will keep the child and throw away the dirty diaper, Coffee and da Silva saved the collection bags and released the now-naked turtles back into Moreton Bay. 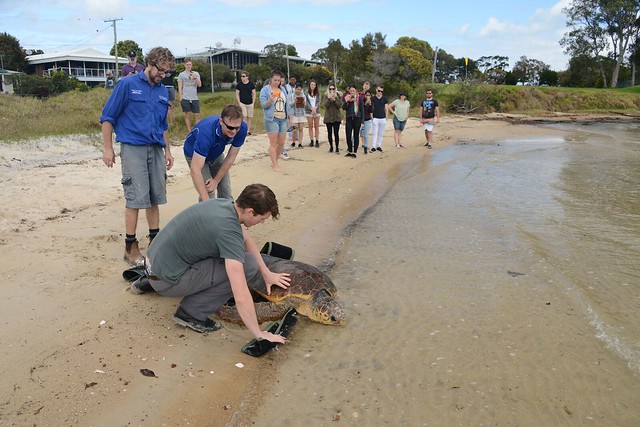 The researchers will now analyze the feces to figure out what the turtles have been eating and where they’ve been foraging, information crucial to protecting them.

Coffee is satisfied with his collection, and Townsend was impressed with his needlework. In a recent press release, Townsend said that not only were the swimsuits easy to put on and comfortable for the turtles, but they also “looked great.”

All images embedded via the University of Queensland Flickr page