Why There Are So Many Bicycles in the Netherlands

Though Sunday is ostensibly a day of rest, in practice, it's usually a day for errand-running, church-going, and family-visiting. In other words, while most people aren't commuting, they're still putting plenty of miles on their cars. Not so for citizens of the Netherlands during the last handful of Sundays in 1973. Whatever the Dutch were up to, they did it on two wheels, not four—and not by choice.

Although the bicycle had long been a common mode of transportation in the Netherlands, the popularity of the car continued to grow after the war, just like in the U.S. Unfortunately, more cars also meant more car accidents. More than 3000 citizens were in fatal wrecks in 1971, 450 of them children. The tragic deaths sparked a national movement called Stop de Kindermoord—“Stop the Child Murder.”

But even the increase in fatalities wasn’t enough to put the brakes on cars; what finally brought the situation to a head was the oil crisis of 1973, when the Organization of Arab Petroleum Exporting Countries (OAPEC) proclaimed an oil embargo. In an attempt to conserve resources, the government announced Car-Free Sundays. Where 3 million sedans and vans usually roamed, bicycles and even horses took over the streets. Children roller skated down the middle of formerly busy thoroughfares. People had picnics on freeways. And only a few people disobeyed; just 239 vehicles were impounded the first day. 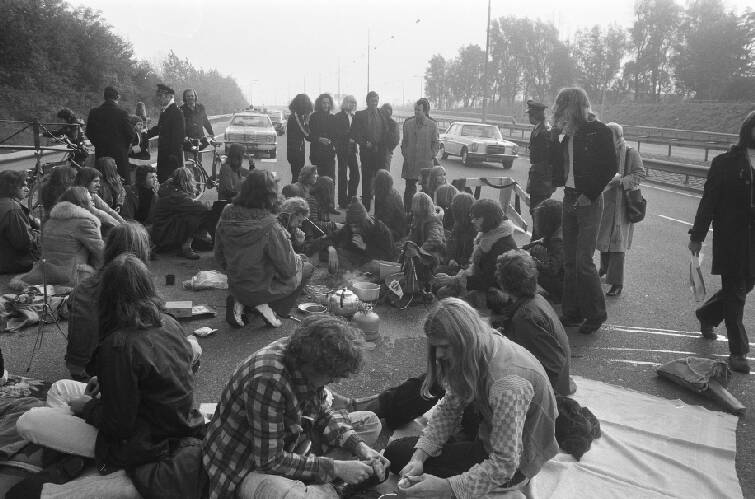 The official mandate was lifted just a couple of months later on January 6, 1974, but many people continued to use alternative means of transportation (although the roller skating down packed avenues probably stopped). With so much public support for the movement, the government and urban planners worked together to make roads more cycle-centric than car-centric—and the plan worked. These days, there are tens of millions of bikes in the Netherlands—and only 8 million cars.