Not many travelers view the hotel as a highlight of their vacation, but guests checking in to these delightfully geeky rooms may never want to leave. From superhero to 007-themed, we’ve gathered 15 of the most impressive pop culture-inspired rooms and suites from hotels across the globe.

For a month in 2013, a piece of the final frontier landed in the Sheraton hotel in Sao Paulo, Brazil. As part of a promotion for Star Trek Into Darkness, the hotel transformed one of their suites into a Trekkie’s paradise. The room was decked out with scenes of the cosmos, pillows emblazoned with the delta shield, and LED lights that performed various effects via remote control. Sadly, the room was only available for a limited time, so it’ll be hard to get there without some serious knowledge of temporal mechanics.

The land-locked state of Colorado isn’t the first place you’d think to go for a taste of island living. Luckily, parrotheads passing through Denver can check into the Jimmy Buffett suite at the Curtis Hotel. Ocean-blue tiles adorn the floor and a hand-painted mural covers the wall with allusions to top hits like “It’s Five O’Clock Somewhere.” Naturally, margaritas are included as part of the amenities.

Just because you never received your letter from Hogwarts doesn’t mean you have to miss out on the wizarding school experience. At the Georgian House in London, guests can check into the Wizard’s Chamber for a night taken straight from the Harry Potter books. On their website, the Georgian House describes the rooms as having been “created to transport you to a totally different world!” Magical features include potion bottles, cauldrons, and four-poster beds in true Hogwarts style. Afterwards, muggles can take one of London’s many Harry Potter-themed tours.

If you don’t have the time to visit every hotel featured in the franchise, this 007-themed suite offers a concentrated James Bond experience. If the sleek, futuristic design and retro murals aren’t enough to get you feeling like the man himself, you can watch all of the movies from the room’s flat-screen TV.

No one knows style better than Barbie. For a truly chic Vegas vacation, guests can stay in the Hot Pink Suite at the Palms. The decor includes corseted chairs, Barbie-inspired artwork, and a sunburst mirror made from 65 Barbie dolls. A night in the dream house starts at $3000.

If Bruce Wayne built a vacation Bat Cave, we’re guessing it’d look something like this. The Batman Room in Taiwan’s Eden Motel comes equipped with a bat mirror, a bat headboard, a bat safe, and a bat TV. There’s even a bat signal positioned above the bed.

7. GUEST HOUSE // THE SHIRE OF MONTANA IN TROUT CREEK, MONTANA

The Shire of Montana

Tolkien enthusiasts can stay in this Hobbit-inspired home for a true taste of life in the shire. The partially underground, domed dwelling incorporates a mystical, woodland theme throughout its interior. Unlike an actual hobbit home, the guest house also offers Wi-Fi and HD TV to visitors.

The Despicable Me Kids Suite at the Universal Orlando resort includes a wall full of the beloved characters overlooking two minion-sized missile beds (grownups have to sleep on the queen bed next door).

No one does fairytales better than Disney. This insanely extravagant suite features a canopy bed, a marble foyer, and a mosaic of Sleeping Beauty’s castle above a luxurious Jacuzzi tub.

Oddly enough, this whimsical room is located in an unassuming Radisson off a Pennsylvania highway. With tropical flowers, shell lamps, crates of wine, and a fishnet bed canopy, this is a place guests won't mind getting stranded in. 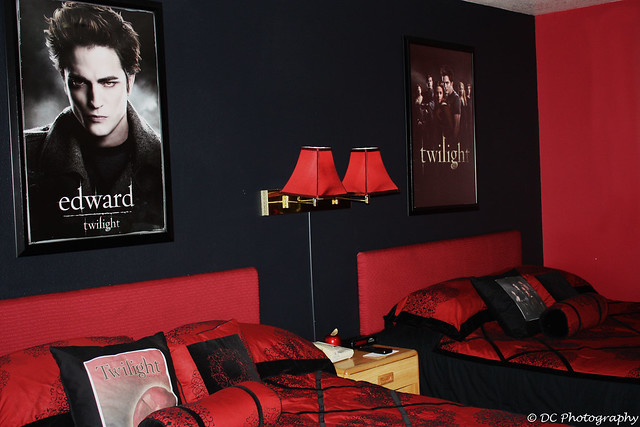 Anyone who goes out of their way to visit Forks, Washington, was probably inspired by a certain vampire series. The Pacific Inn Motel has found a way to capitalize on their town’s newfound fame with their Twilight-themed rooms. The spaces follow the same morbid color motif as the book covers. Above the blood-red bed hang posters from the films. Black curtains block out the sun, ensuring any potential sparkling is kept to a minimum.

There’s a way to experience Eloise’s life at the Plaza Hotel without becoming a permanent resident. Designed by fashion designer Betsey Johnson, the Eloise suite features pink-and-white striped walls, a zebra-print carpet, and a neon light fixture displaying Eloise’s name above the bed.

If you’re looking for a psychedelic place to stay, head to the Cumberland hotel in London. The trippy murals and colorful furnishings transport guests straight back to the sixties. The suite also includes a "Flying V" guitar made to resemble the one customized by Jimi Hendrix himself. Unlike most hotel rooms frequented by rockstars, this spot is too gorgeous to trash.

This is more than just a pirate-themed room; it's a LEGO-pirate-themed room. The interior is meant to feel like the inside of a pirate ship, and elaborate LEGO creations like a Jolly Roger-emblazoned hat and a swashbuckling parrot are hidden around the suite. In addition to their pirate-themed rooms and suites, guests to the LEGOLAND hotel can also book their stay in the "Adventure" or "Kingdom" accommodations.

15. THE LEGACY OF THE RIVER ROOM // ICE HOTEL IN JUKKASJÄRVI, SWEDEN

Each year, Sweden's Icehotel is constructed from scratch to showcase a series of art installations. In 2010, a pair of diehard Tron fans designed a high-tech suite for the hotel ahead of the premiere of Tron: Legacy. Inspired by the futuristic night club scene featured in the sequel, the suite was illuminated by electric blue light circuitry threaded through the icy walls.