Vending machines are ever-present in the United States, and today most of them are filled with snacks and drinks to be consumed on the go. But over the years, people have used vending machines to buy and sell some pretty unorthodox things. From machines that sell seafood to ones that deliver hot meals, here are some of the weirdest vending machines in history. 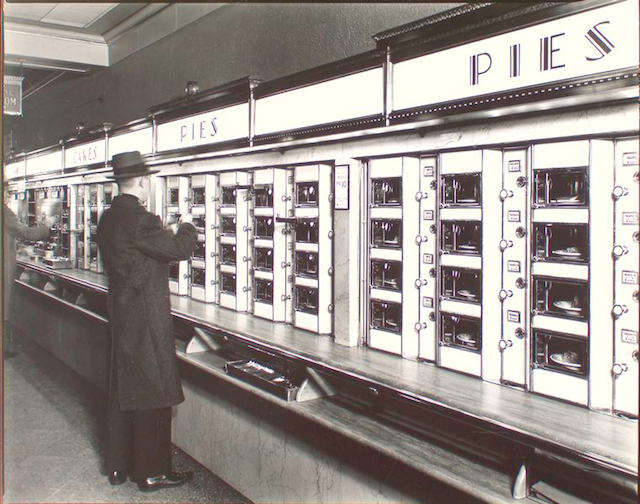 Making its debut in Philadelphia in 1902, the Horn & Hardart company was once at the top of the restaurant food chain, serving an estimated 800,000 people a day. Borrowing a successful idea from German restaurants, the chain used nickel-operated Automat (“self-acting”) vending machines with doors that patrons had to open to reach their meals. Different food options (including pies and cakes) were kept behind different doors so meals were customizable, and hungry workers could grab a hot meal without waiting in line. The machines were also used to sell other products, like nylon stockings and bikinis. The last Automat in the United States closed in 1991, but they can still be found in places like the Netherlands and Spain.

An Italian entrepreneur named Claudio Torghele decided that what the world needed was a machine that could make and cook a pizza in just a few minutes, so he developed these Let’s Pizza machines. There are four kinds of pies to choose from, and the customer can watch the process and have a hot pie in their mouth in about two-and-a-half minutes. Rumor has it that these will appear outdoors in the United States in the future, but for now you have to go to Europe to test them out. 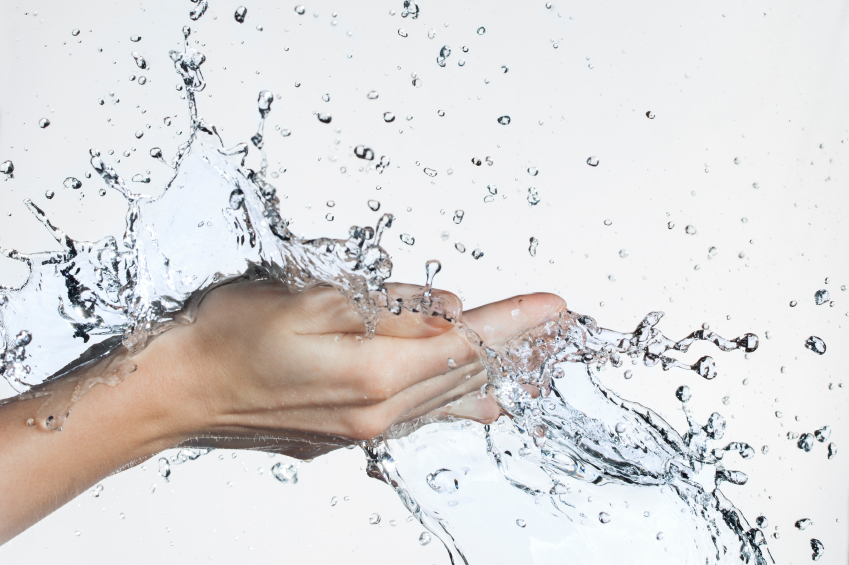 Vending machines have been around since the 1st century, and according to Smithsonian.com, the oldest known machine dispensed holy water. Invented by Hero of Alexandria, the machine was coin-operated and worked with a lever system. Those seeking the anointed waters would insert a five-drachms coin, which would hit a metal lever attached to a string and plugged-up water reserve. A specific amount of water would pour out until the coin fell off the lever. Historians believe that the machine was invented because people were taking more holy water than they were paying for.

In 2014, a company called The Box Brands began testing their Burrito Box machines in Los Angeles. Unlike the Let’s Pizza machine, the boxes delivered packaged burritos, and did not show the customer how they are made. Instead, the vending machines played a music video and dropped the food when it was cooked. In the video above, Zagat blogger Lesley Balla and Midtown Lunch founder Zack Brooks question whether or not the Burrito Box is just a “giant microwave,” or if there are robotic arms making the burrito from scratch.

(Spoiler: they conclude that it’s the former, but that the burritos taste better than standard gas station offerings).

Who needs sodas and snacks when you can grab a couple live crabs from a machine on your way home from work? Found in China, the machines are maintained at a temperature that keeps the crabs alive but sluggish, and the creatures are packaged in special patented containers to keep them from moving and to make them easier to handle. As of November 2010, according to the Associated Press, the owner of the machines was selling around 200 crabs per day at each of his two machines. 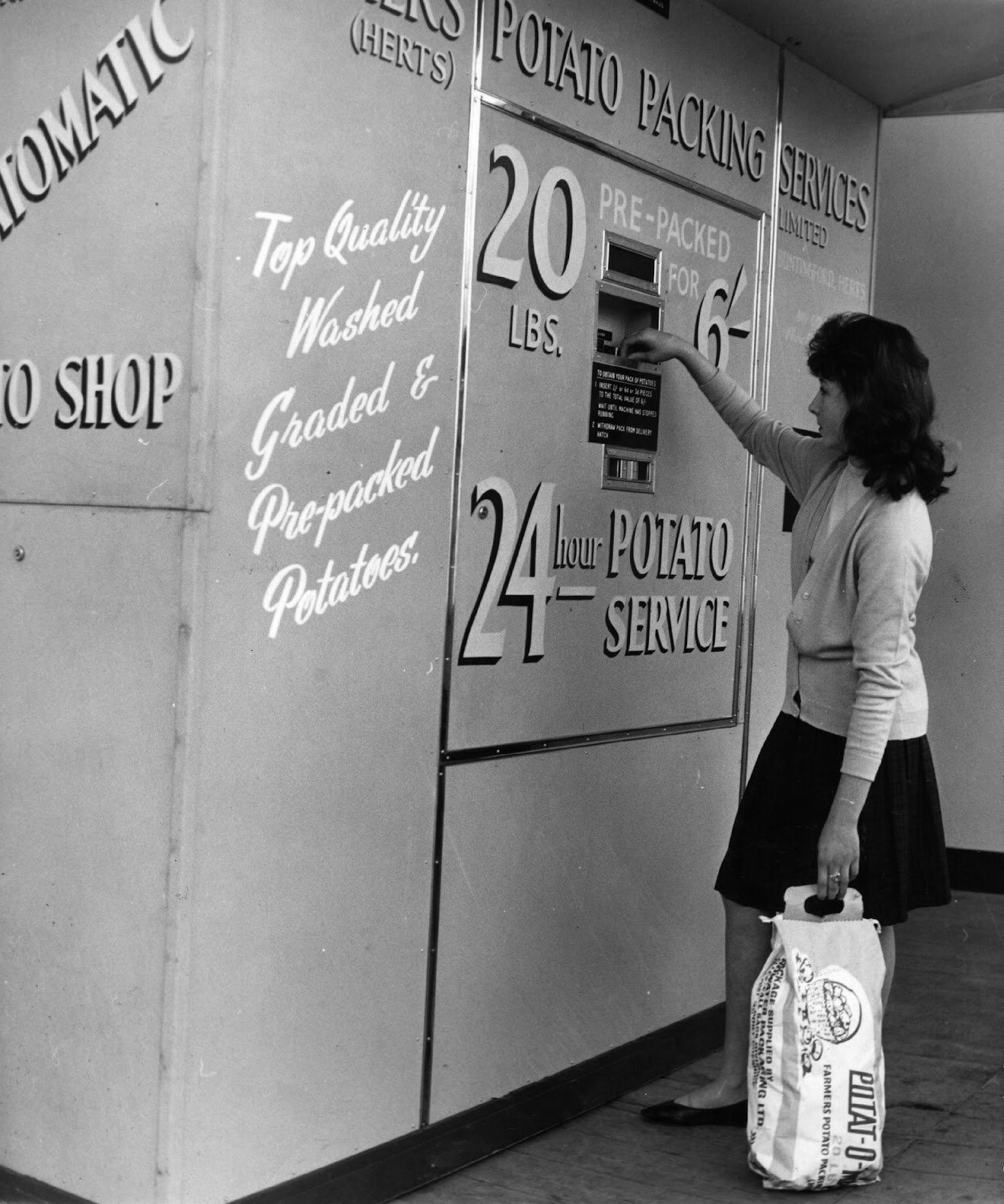 At the grocery store already but can’t be bothered with a trip to the produce section? In the early 1960s, a greengrocer’s shop in Chelsea, London, introduced the world’s first vending machine for 20-lb bags of “top quality, washed, graded, & pre-packed potatoes.” The machine never gained widespread popularity, but according to French newspaper Courrier Picard, a similar machine installed in the Nouvion commune by two farmers saw great success in 2014. 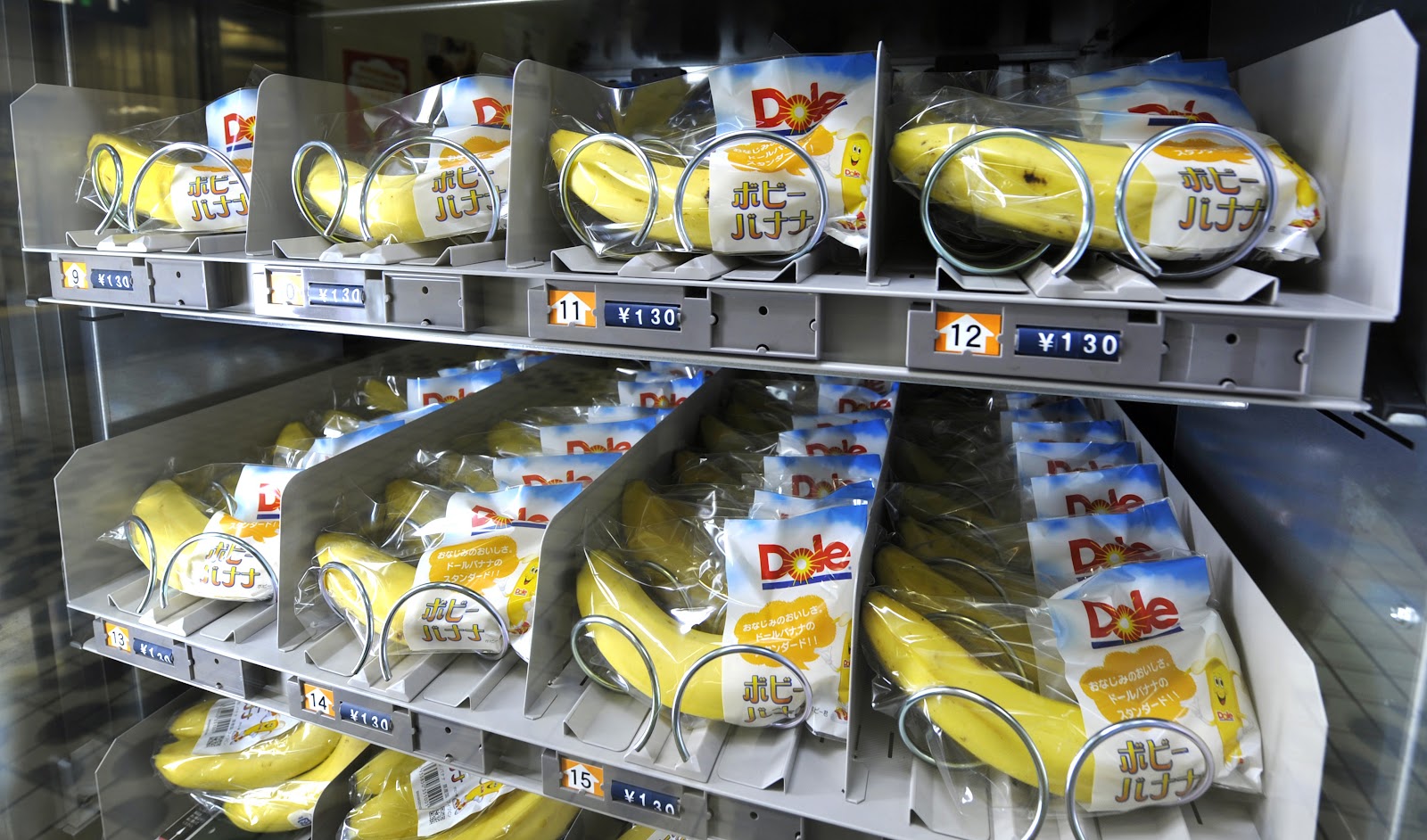 The words “fresh produce” are not often associated with vending machines because of the extra work needed to keep the stock from perishing, but in the summer of 2010, Dole Japan, Ltd. installed a banana vending machine at a train station in Tokyo. According to Getty Images, there are five million vending machines in Japan, so one selling fruit for around $1.50 each doesn't seem that bizarre. 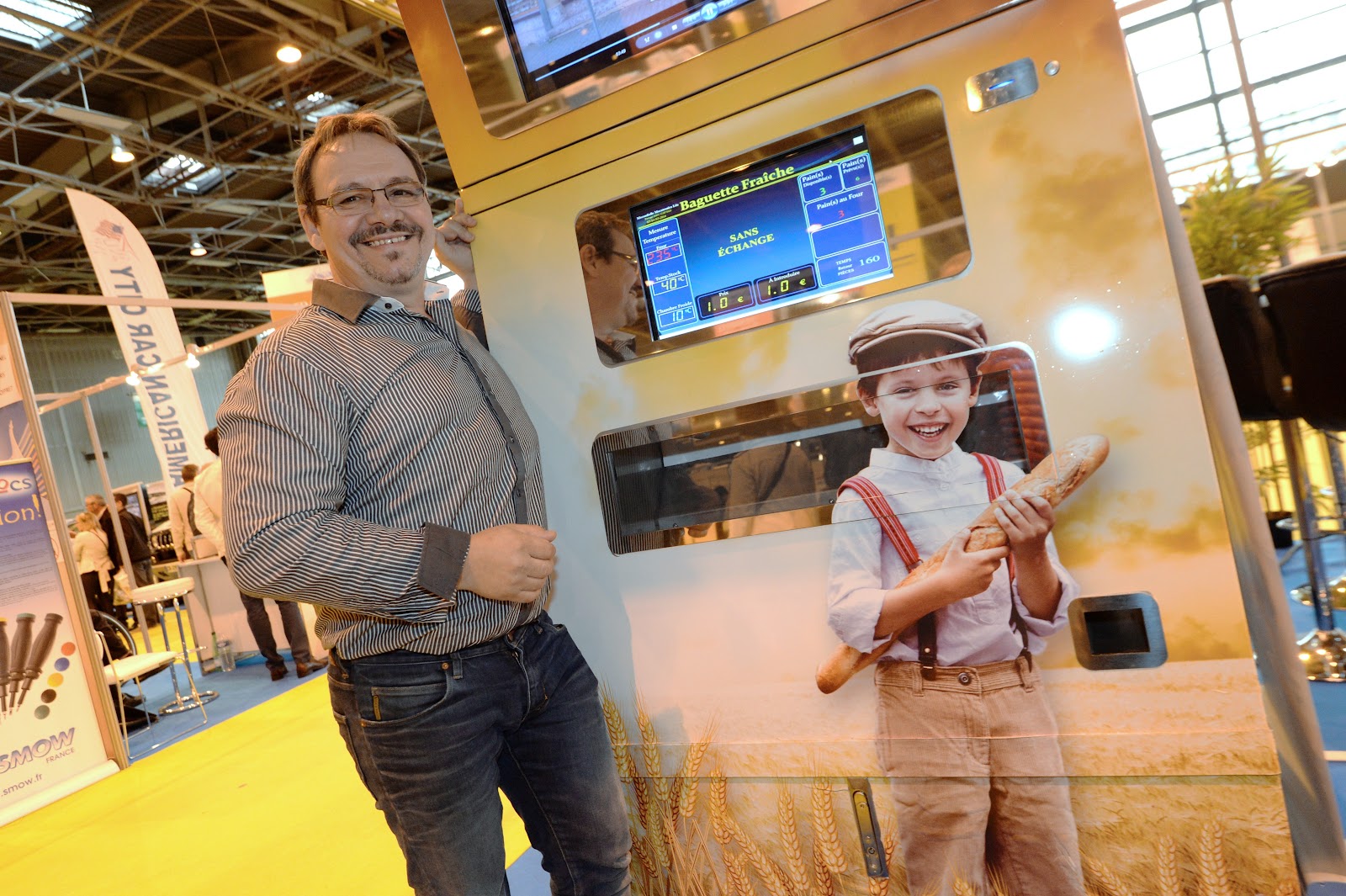 A little over a decade ago, baker Jean-Louis Hecht and his wife got tired of customers showing up to his bakery (which was below his home) to try and get baguettes after closing hours. After developing the idea for years, Hecht brought it to life and gained worldwide recognition for the bizarre invention in 2011. The “Pani Vending” machine works 24 hours a day, taking partially baked baguettes and finishing them in minutes while the customer waits. According to NBC News, the first machine cost Hecht $71,000, but in his first month he sold 1600 baguettes, and in July of that year his sales rose to 4500. He also won the President of the Republic's prize at the 2014 Concours Lepine in Paris.

Hitting every price point between $5 and $500, the Beverly Hills Caviar company installed a vending machine in a Los Angeles mall to give shoppers the opportunity to dine on beluga eggs while scoping out gifts for their loved ones. The specially made machine kept the eggs cold and held around $50,000 worth of the luxury food, according to a CNN report (above). “It’s very accessible, very convenient,” owner Kelly Stern said, while a few of the shoppers interviewed said that they would never put $500 into a vending machine. 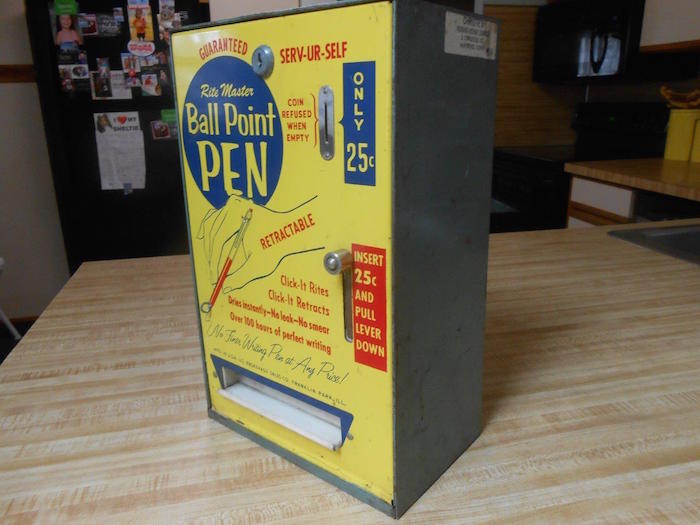 Sometimes you just need a new pen fast! The novelty of being able to insert a quarter and pull a lever for a pen must have added to the success of these machines (25 cents in the mid-1950s is around $2.20 when adjusted for inflation). On eBay, these odd creations, from brands like Vendorama and Rite Master, sell for hundreds of dollars to collectors. 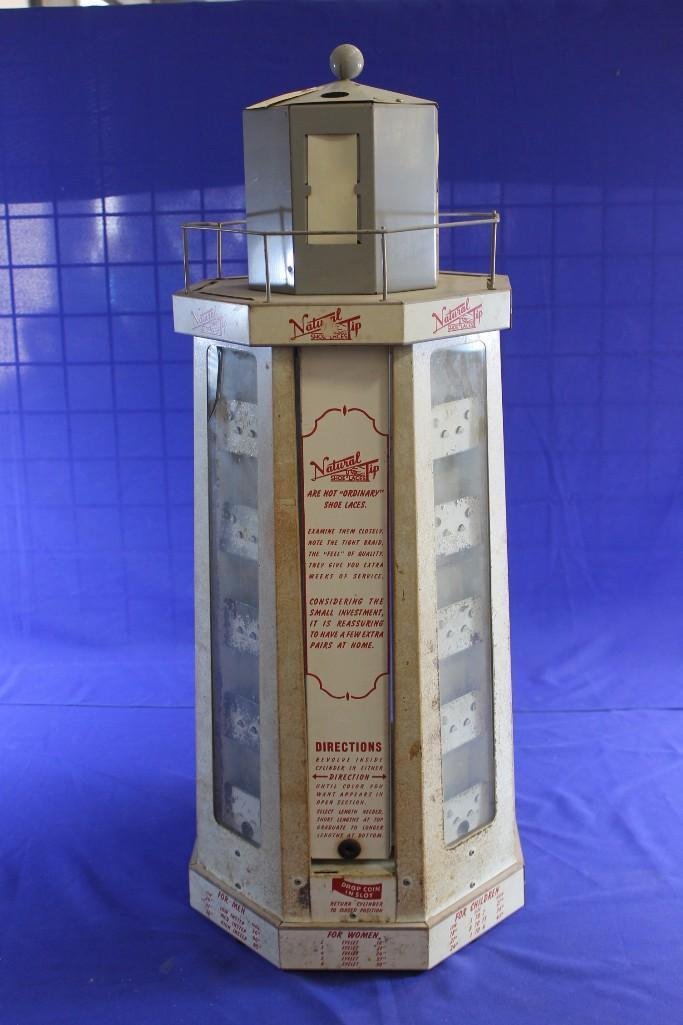 Getting something as simple as a pair of laces from a machine is already a bit weird, but building the machine in the shape of a lighthouse? The Live Auctioneers listing for this item does not reveal much about its history, and other auctions for Natural Tip, the brand of shoelaces sold in the machine, only confirm that the company was active in the 1940s, not whether it was located in a seaside town or somewhere where lighthouses were popular.

As with the banana machine in Tokyo, getting fresh eggs from a machine sounds like an impossibility, if not a recipe for disaster, but it seems to work in Japan. According to the Glaum Egg Ranch in California, the first egg vending machine was made by farmer Marvin Glaum, and today customers on the Glaum farm can see an animated chicken show when they insert their money.