“Form follows function” is a maxim many modern architects swear by. For the designers of these flashy and usually pointless structures, one part of that equation was left out.

In architecture, a folly is a decorative building that doesn’t serve much of a practical purpose, even if it’s meant to look like it does. They can be found all over the world, and range from crumbling (fake) ruins to a tropical fruit-themed greenhouse. Here are 10 architectural follies whose style overshadows their substance.

This scaled-down, Neo-Gothic structure jutting out over the Black Sea (pictured above) is hard to miss. When a building was first constructed there in 1895, it took the form of a decidedly more humble wooden cottage. In 1912, that house was demolished and this gaudy structure was erected in its place. Though it resembles a castle, it doesn’t fit the true definition in part because the turrets and battlements are purely ornamental. Despite its precarious position, the Swallow’s Nest survived a powerful earthquake in 1927. Today it’s a popular tourist attraction and the site of an Italian restaurant.

“Wonderful” is one way to describe this barn in Kildare County, Ireland. A more accurate label might be just plain weird. The corkscrew structure towers 70 feet above the ground, with a staircase along the exterior spiraling to a crow's nest viewing platform at its pinnacle.

The Wonderful Barn was commissioned by Katherine Conolly of the Castletown Estate, widow of a prominent member of the House of Commons, to provide work during the Irish Famine. The building is one of Ireland’s many “famine follies” left over from the period, which include a 140-foot tall obelisk also located on the Castletown property. Several groups are currently working toward restoring the barn and opening it up to the public. 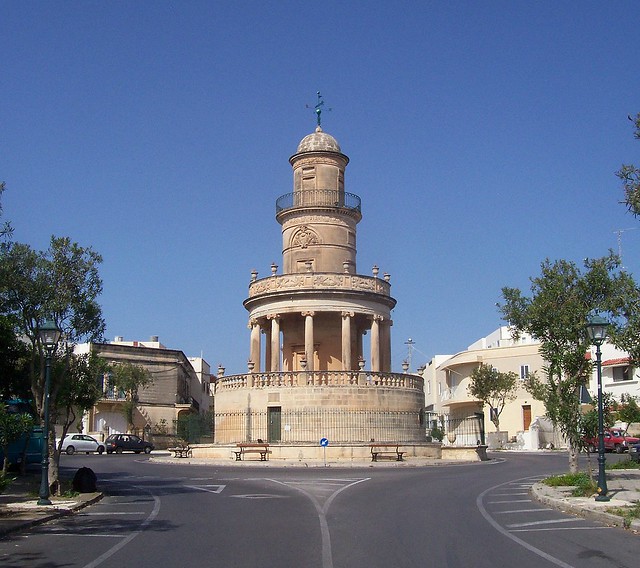 The Belvedere Tower in Lija was originally erected on the grounds of Malta’s historic Villa Gourgion. It was built to provide a place for guests and residents to come and relax amongst the property’s extravagant gardens and orange groves. The gardens were eventually torn up to make way for new roads, and the only feature that was spared was the Belvedere Tower. It currently sits in the center of the street's roundabout.

This structure on the grounds of Hagley Park in Worcestershire resembles the ruins of a medieval castle that’s been crumbling away for centuries. In reality, it was built to look that way from the beginning. Construction was started on the Castle in Hagley Park in 1747 by Sir George Lyttelton, the man responsible for restoring the property to its present condition. According to the Hagley Historical and Field Society, the castle and the park’s other follies served two purposes: "First, to lead the eye towards a point in the distance and, secondly, to provide a talking point often associated with architectural styles, classical stories, poets, and other topics." Today, the Castle in Hagley Park is used as a private residence.

The Dunmore Pineapple started out as a fairly ordinary piece of architecture. The lower part of the structure was originally built as a Palladian-style greenhouse around 1761, and the eccentric pineapple topper wasn’t added until 1777, following the Earl of Dunmore’s return from Virginia. The fruits were so rare in Europe at the time that they were seen as a symbol of wealth and hospitality. They were also placed on gateposts to signal a sailor’s homecoming, so the folly could have been viewed as an over-the-top announcement of the earl's return.

In addition to being a place to grow actual pineapples, the Dunmore Pineapple was used as a summerhouse and a platform for viewing the surrounding natural beauty. Anyone interested in getting an intimate look at the building can now rent it out as a holiday home.

The designer of this folly building in Northamptonshire, England had a bit of an obsession with the number three. Sir Thomas Tresham was a devout Catholic at a time when Protestantism was the law of the land, and he was sentenced to 15 years in prison when he refused to convert. After he was released in the late 16th century, Tresham began construction on the Triangular Lodge as a testament to his faith. He paid homage to the Holy Trinity in every aspect of the design, with the building’s three floors, three 33-foot sides, three windows on each side of each floor, and inscriptions of three Latin Bible verses—each 33 letters long.

The building’s ultimate purpose was much less divine than its structure would suggest—it was used as lodging for the gamekeeper who took care of Tresham’s rabbits. Today the house is maintained by English Heritage and it’s open to the public.

Though he wasn’t an architect, French postal worker Ferdinand Cheval dreamed of building his own palace. One day in 1879, Cheval stumbled over a striking-looking rock along his usual route, which inspired him to get to work on constructing his vision. His “ideal palace,” made entirely by hand using individual stones he collected, took him 33 years to complete. Today the structure attracts tourists who come from all over to admire the palace’s whimsical details and diverse architectural styles.

In a field in Northern England stands a pyramid-shaped archway that doesn’t seem to serve much of a purpose. According to legend, the structure was built after the Earl Fitzwilliam drunkenly accepted a bet that he’d be unable to "drive a carriage through the eye of a needle." Once he realized he’d made a foolish mistake, Fitzwilliam is said to have found a way around the challenge by constructing a narrow, 45-foot tall passageway and naming it "The Needle’s Eye." It’s also possible the pyramid was used as a site for target practice or firing squad-style executions, as there are several musket-ball holes marking one side.

Wainhouse Tower is believed to be one of the tallest folly buildings ever constructed. The structure was initially intended to be used as a chimney for an industrial building after the Smoke Abatement Act was passed in 1870, but the factory was sold before construction could be completed. The owner of the factory, John Edward Wainhouse, decided to continue building the tower and instead make it into a "general astronomical and physical observatory." After the project was completed, the elaborate structure stood 275 feet tall and had cost a total of £14,000 to build. His neighbor and rival accused Wainhouse of building the tower so he’d have a way to spy on him.

Visitors to Lake Otsego in New York may be lucky enough to catch a glimpse of this Gothic-style castle sticking out along the shore. The tower was commissioned in 1876 by Edward S. Clark, one of the co-founders of the Singer Sewing Machine company. The structure wasn’t built for any particular purpose other than to add decoration to the lake and provide construction jobs. The castle is still owned by the Clark family, and the only way to get an up-close look at the building is by boat.