10 Apartments and Houses With Crazy Features

Many children dream of having incredibly fun living spaces when they grow up—like a room with a disco floor, or a ceiling made entirely out of Pez dispensers. Thankfully, some of those children grew up and became architects or designers who made their seemingly outlandish apartment dreams a reality. Here’s a collection of 10 homes with amazingly fun features.

1. AN APARTMENT WITH AN INDOOR SWIMMING POOL

Sure, you've heard of apartment buildings with indoor pools, but what about an apartment with a pool directly in the unit? When this three-bedroom apartment in Sydney came on the market two years ago, it was snatched up almost immediately, probably because of the personal-sized indoor swimming pool in the living room. When not in use, the pool is shielded by a glass cover, which lifts up with the help of a winch. The pool isn't the apartment's only awesome feature; it also has an indoor grill and a retractable roof (but really, nothing tops being able to take a swim in the middle of your living room).

2. A HOUSE WITH HAMMOCK FLOORS

What better way to relax after a long day than sink into your hammock floors and read a good book? That was architect Nathalie Wolberg’s notion when she designed Maison NW, her home and workspace, in Saint-Quen near Paris. Formerly a 1950s printing house, the three-floor home has been transformed into nine artist studios; according to Archinet, Wolberg treats it "as a laboratory to test out new devices and new environments on a daily basis." The top floor has an area with hammock netting where residents can lie down and stare up at a giant skylight in total comfort that Archinet says "allows the individual to extract himself from the surrounding environment, and makes the body become gravity-conscious."

3. A PENTHOUSE WITH AN INDOOR SLIDE

When New York City architect David Hotson was tasked with designing the penthouse in an 1896 skyscraper in lower Manhattan that was being converted to residential use, he added a feature most kids would kill for—a giant, indoor slide. The polished stainless steel tube starts at the top of the four-story penthouse and makes a pit stop on the third floor (where riders can get out, if they choose) before continuing down to the first floor. The home, which Hotson dubbed "Skyhouse," has other fun accents as well, including skylights, exposed steel beams from the original structure, funhouse mirrors, and bright furniture; the architect worked with interior designer Ghislaine Viñas on the project.

How do you make your apartment pop? Simple—stick 25,000 ping pong balls to its walls. That’s what Snarkitecture partner Daniel Arsham decided to do to his small apartment in Brooklyn. According to Inhabitat, it took Arsham two months to affix all the balls to the walls of his room, which he calls “Box/Box.” (Not all the walls are ping pong ball-covered, though; some have mirrors to make the space look bigger.) Arsham's living space is only 90 square feet, but he shares a 2500 square foot workspace with other designers.

5. AN APARTMENT WITH A FIREMAN’S POLE

Because the owners of a two-story apartment called Haus JJ in the Kreuzberg area of Berlin wanted to be able to get between floors quickly, they asked their architect, Jörg Petri of NOWlab, to put in a slide. "Unfortunately the floor plan did not allow enough space so we had to compact the idea," Petri told Dezeen. "[T]he result was a fireman's pole." To keep the pole out of the way, it's tucked into a corner of a small room that is shielded by a bookcase. The pole leads down into the owner’s office, just in case he has an idea for work and needs to start on it ASAP.

6. AN APARTMENT WITH A JUNGLE ROOM, DESIGNED BY JEAN-PAUL GAULTIER

You probably know designer Jean-Paul Gaultier for the looks he sends down the runway, but the former creative director of Hermès also has apartment design on his resume. In 2010, Gaultier decorated each room of a Paris apartment formerly owned by architect Jacques Carlu with a different theme (a task that reportedly took three months). One room was entirely covered in jersey fabric (including the furniture), while another featured a bed with a doll whose dress served as the comforter. And then there was the jungle room, which featured plants on nearly every surface. "My imagination comes from the cinema," Gaultier told Dwell. "I love the idea that nature is capable of trumping concrete.” Gaultier was the third fashion designer to revamp the space.

7. THE APARTMENT OF EXTERIOR STAIRS

Tokyo Apartment is actually a collection of four different apartments designed by Sou Fujimoto. The design was a collaboration between the well-known Japanese architect and the owner of the property, who had given up his job to care for his wife, who had a stroke. Instead of selling their plot of land when the couple's savings began to run out, he commissioned architects to design something unique to attract potential renters. Fujimoto’s vision fit the bill. The result is something out of the 2010 film Inception—stacked block-like structures with pitched roofs that have stairs wrapping around the outer walls and rooftops. Inside, the apartments range from 330 to 602 square feet and are outfitted with ladders to get from floor to floor.

8. A STEAMPUNK APARTMENT WITH A ZEPPELIN LIGHT

This New York City apartment was a steampunk enthusiast's dream. In addition to a submarine-style entrance—which even had a working porthole—and vintage pipes, the apartment featured a 32-foot-long zeppelin LED light fixture. Sadly, after the 1800 square foot apartment was purchased in 2012, it was de-steampunked; all that remains is the kitchen, which featured antique parts.

Each one of these unusual Tokyo lofts comes with a set of instructions: Residents are to "treat each room as if it were you yourself, a direct extension of you," and, when they entered a unit, should "fully believe you are walking into your own immune system." According to Slate, the lofts were produced by Reversible Destiny, a foundation that seeks to extend lifespan through architecture. The idea is that homes constructed with such unusual features will force residents to keep changing up their routines, thereby avoiding becoming comfortable and eventually meeting their ultimate fates (a.k.a. death). Some of the many unusual features of these apartments are spherical rooms, swing sets, and random ladders.

10. A HOUSE DESIGNED FOR CATS

This colorful, cat-friendly abode in San Diego was designed by former owners Bob and Frances Walker. Among the many cat-friendly features that they built for their nine cats: floor-to-ceiling scratching posts, hanging staircases, and elevated walkways, all in bright, bold colors. They started their work in 1986, and when they sold the property in 2013, every inch was covered in cat paraphernalia; the owners called the style “Cat Baroque.” Unfortunately, after the Walkers sold the property, the new owner got rid of the cat walkway. 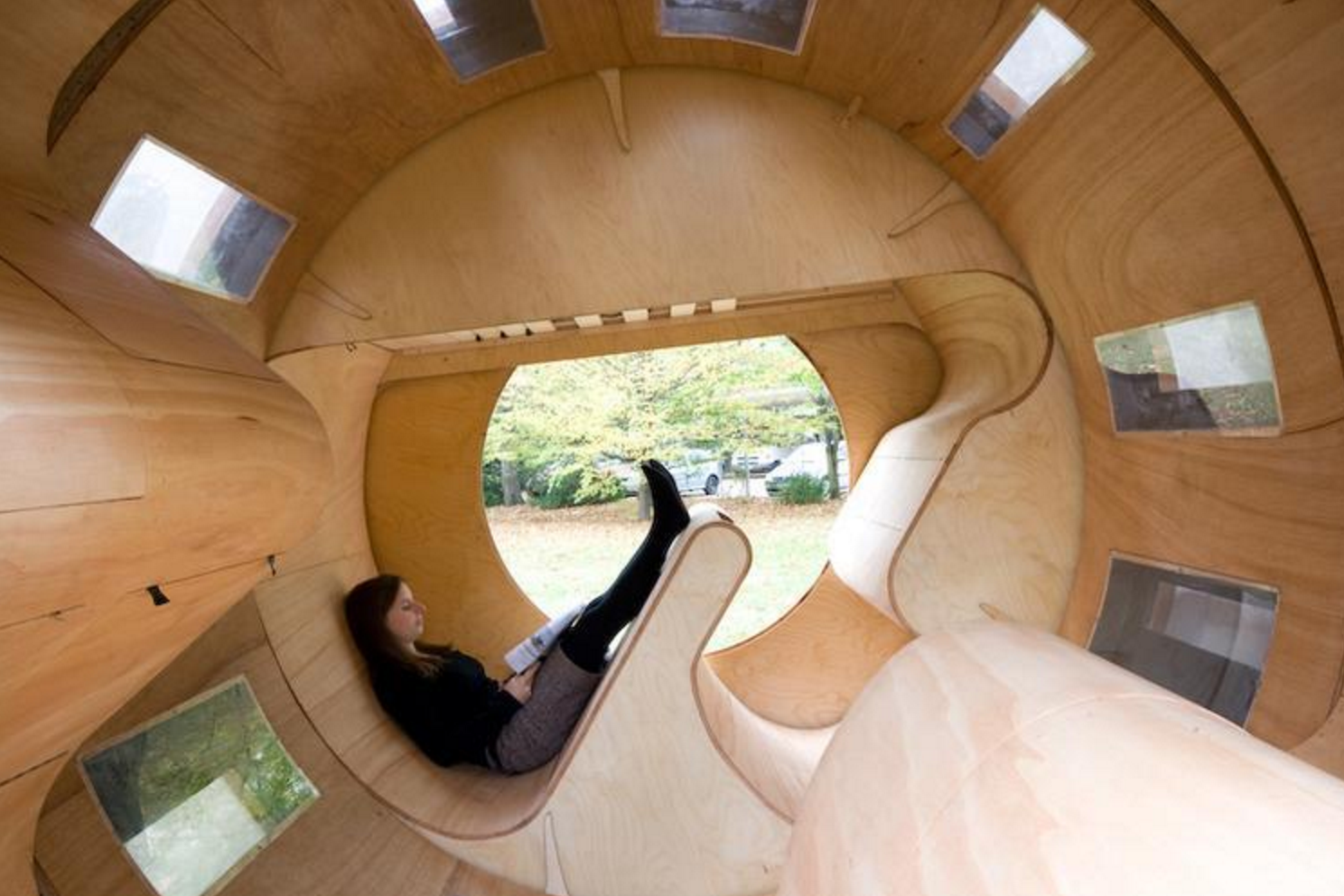 This adventure in experimental housing has all the things you'd need in an apartment in one giant wheel. Roll It was created by students at the University of Karlsruhe in Germany. All you have to do is walk in it like you would a hamster wheel, and let it roll into the feature you want to use. The unit contains a bed, a lounge chair, a table, built in storage, a shower, a kitchen sink, and even a toilet. The cushions for the bed and lounge chair are attached with velcro and can be stored until you need them. There's no evidence that this home ever made it out of prototype, which is a shame—it would be an interesting place to throw a party.