10 Unusual Observation Towers From Around the World

We all like to get a sense of where we are in the world. Observation towers—the ones we climb to get a good look around—provide us with the opportunity to survey the beauty of the land for miles without having to scale treacherous mountains. Sometimes, though, the thing you’re looking out from can be just as interesting as the view itself.

By today’s standards, Pennine Tower, near Lancaster, England (above), is much more interesting to look at than the view it boasts. Erected in 1964 and opened the following year, the tower forms part of a rest stop on the M6 Motorway and acts as a halfway point on a drive between London and Edinburgh. The incredible 72-foot brutalist tower was originally home to a 24-hour restaurant and observation deck—used to look at the motorway below and glimpse the future of road travel.

It’s since earned the honor of becoming a Grade II listed building in the UK for reasons of historic and architectural interest, with its citation from Historic England stating that the tower is “reminiscent in form to an airport control tower, evoking the modern glamor of 1960s air travel and also drawing on the progressive urban movement of this period of constructing towers with restaurants and observation platforms.” Sadly, due to changes made in fire safety regulations in the UK, the tower has been closed to the public since 1989, but some urban explorers have still managed to find their way inside.

No, you’re not seeing things—that indeed is a giant beer bottle. Built by Tuborg Brewery in 1888 and standing at a modest 85 feet tall with an observation deck in the bottle top, Tuborgflasken was built for display at the Nordic Industrial, Agricultural, and Art Exhibition in Copenhagen. It also helped to announced the advent of bottled beer to the people of Denmark. Originally it contained Denmark’s first-ever mechanized elevator, but that has since been replaced by a much more maintenance-friendly spiral staircase. The bottle has since moved from Copenhagen and sits proudly in the town of Hellerup, Denmark, returning to Copenhagen just once in 1988 for its centenary celebration.

This may be cheating a bit since it’s not so much a tower as an observation deck, but when Frank Lloyd Wright designs something, you can't ignore it. Originally included in Wright’s design for the utopian Broadacre City, the gas station is the only structure from those plans to come to fruition, albeit in the relatively unassuming town of Cloquet, Minnesota.

The gas station was made a reality in 1956, after Wright designed a house for a Cloquet native named R. W. Lindholm. Lindholm happened to be in the oil trade, and seeing an opportunity, Wright convinced him to open a gas station in his hometown. One of the most notable elements of this gas station, which is still in operation today, is the second floor glass-fronted observation lounge. All part of Wright’s automobile-focused vision of the future, in which he claimed the gas station was "the future city in embryo," which would "naturally grow into a neighborhood distribution center, meeting-place, restaurant ... or whatever else is needed." 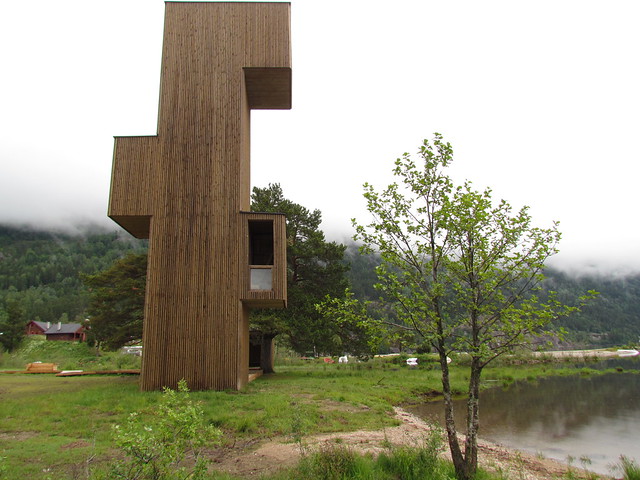 Just over 100 miles west of Oslo, Norway lies Lake Seljord—a perfect example of picturesque Norwegian scenery, but postcard views aren’t the only thing you’ll see here. Dotted along the shoreline at various points you’ll notice wooden periscope-like structures standing 39 feet tall and facing inward towards the lake. Built in 2011 and designed to blend in with the landscape around them while still managing to be gorgeous pieces of minimalist architecture, these towers serve as more than just higher vantage points for natural beauty; they’re used to look for monsters.

That’s right, Lake Seljord is allegedly home to a serpent-like monster named Selma, Norway’s answer to the Loch Ness Monster and a cryptid so intertwined with the folklore of the area that it appears on the Seljord Coat of Arms. It turns out that building these towers may well have been a smart move, as in 2012 a 17-year-old girl captured footage of what she believes to be Selma from her vantage point on one of those very towers. 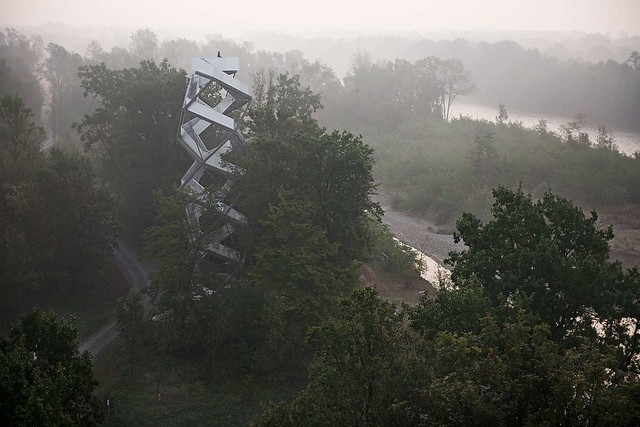 Who says scientific study has to take place in a lab? The Munich-based architectural film Terrain certainly doesn't believe so, as they’ve built an observation tower with art, nature, and science in mind. Modelled on a double helix, this beautiful structure juts out above the treetops near the river Mur in Gosdorf on the border of Austria and Slovenia. At 89 feet tall, it offers amazing views of the surrounding landscape for any hikers willing to climb the 168 steps, but it also serves as a place of scientific observation for the Mur Nature Reserve’s river renaturation project.

This may be the highest tower on this list, sitting at 2700 feet above sea level at the peak of an Austrian mountain called Pyramidenkogel. It also holds the title of being the world’s tallest wooden observation tower, at 328 feet tall. It isn’t the original tower though; the original was built in 1950 as a war memorial, before being replaced in 1968 by a futuristic-looking concrete monolith. That tower was eventually demolished in 2008 and in 2013 the latest incarnation of the tower was opened.

Boasting some pretty incredible views from the observation deck is one thing, but the tower itself is worthy of some lasting glances—a beautiful, twisted helix design that almost seems to flow upwards from the ground below. That’s not the best part though: Pyramidenkogel tower is home to Europe’s longest covered slide. Spiraling down the center of the tower for almost 400 feet, you can expect to reach a speed of around 15 mph, which is pretty fast when it’s just you in a huge metal tube on top of a mountain.

You’d think having a share of the Alps would be enough of a thrill for Austria, but they really love their observation towers. Jubilee Tower (or Jubiläumswarte as the locals call it) is situated on the outskirts of Vienna, Austria. Originally there was a wooden tower built on this site in 1898-'99 to commemorate the 50th anniversary of the reign of Emperor Franz Joseph I, but it only lasted a few months before a storm destroyed it, leading to one being erected out of steel shortly thereafter. In 1956 that tower was replaced by the one you can climb today. Sitting at a cool 1500 feet above sea level, it offers views of up to 100 miles away on a clear day. Third time’s a charm, huh?

Despite what you saw on The Simpsons, the Knoxville Sunsphere isn’t actually full of gorgeous wigs. Don’t let that disappoint you though—this is a 266-foot tower with a 75-foot wide, 24-karat gold orb at the top of it.

Built for the 1982 World’s Fair, the Sunsphere instantly became a Tennessee icon. Its orb is made from 360 glass panels coated in 24-karat gold dust and allegedly costing $1000 per panel to make. Boasting a 360-degree observation deck and restaurant, it was initially a popular attraction. Sadly, its popularity waned and the Sunsphere fell into disrepair and neglect for most of the '90s. A brief attempt at reopening in 1999 didn’t help matters, but it never really left the public consciousness, appearing in Knoxville sports team logos, on postcards, and even on state driver’s licenses. Finally, in 2007 the Sunsphere's panoramic views of Knoxville were reopened to the public and the tower has been operating ever since.

Canton Tower is currently the tallest building in China. It sits on the banks of the Pear River in the Haizhu District of Guangzhou and is an eye-watering 1954 feet tall. Open since 2010, one of the coolest features of this tower is the observation deck, which is officially referred to as a "Horizontal Ferris Wheel Bubble Tram." Essentially a series of pods (or bubbles) on rails, a group of people can sit inside a single bubble as it travels around the circumference of the building at 1492 feet above the ground.

i360 is British Airways’ new observation tower, built along the coastline of Brighton, England. Billed as a sort of vertical pier and costing £46 million (around $59 million) to build, it stands at a gigantic 531 feet tall, making it the world’s tallest moving observation tower. Up to 200 passengers are free to roam around what is essentially a giant glass donut as it ascends to a height of around 450 feet, offering panoramic views of the British coast. The tower hasn’t had the most successful of launches however, with 180 passengers getting stuck up there for two hours in September. Still, we're sure they appreciated the prolonged look at the view.